The Daily Northwestern • May 22, 2022 • https://dailynorthwestern.com/2022/05/22/ae/liner-notes-kendrick-lamar-delivers-musical-catharsis-on-mr-morale-the-big-steppers/ 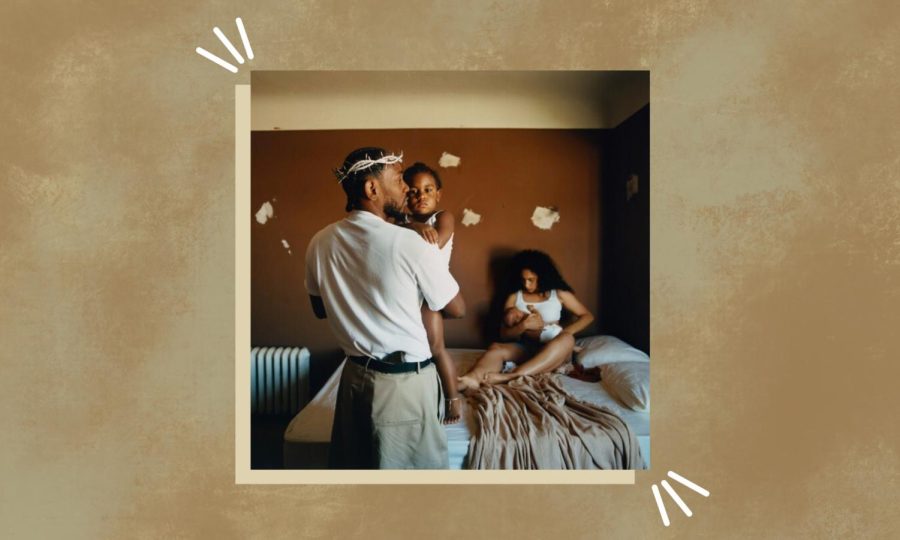 Kendrick Lamar’s latest album, “Mr. Morale & The Big Steppers,” is the final release in his contract with Top Dawg Entertainment.

After the first 25 seconds of the opener of the album “Mr. Morale & The Big Steppers,” rapper Kendrick Lamar speaks his first words — “I’ve been goin’ through something.”

By the end of the album, it’s hard not to believe him.

In the same song, “United in Grief,” Lamar reveals he started seeing a therapist. With the sheer quantity of admissions, flashbacks and themes packed into the double album, listeners themselves might sometimes feel like Lamar’s therapist — and woefully underqualified ones at that.

Take, for example, “Worldwide Steppers,” in which Lamar confesses to multiple betrayals over a sinister combination of piano, bass and ghastly background vocals. He discusses his infidelity toward longtime partner Whitney Alford as a “lust addiction” toward white women that he connects to an inversion of traditional race relations. In Lamar’s words, “ancestors watchin’ me f*** was like retaliation.”

He also references a hometown betrayal during a community toy drive with a triple entendre. The heightened anxiety (“blood pressure”) at the event — due to literal health problems (“blood pressure”) caused by the food, the presence of gang members (“Blood pressure”) or possibly both — is something for which he feels responsible.

Or look at “Mother I Sober,” the penultimate track. Lamar feels distressed from being unable to defend his mother from sexual assault, despite being 5 years old at the time. This discomfort is furthered by family members asking whether he himself was sexually abused by his cousin. Even though he truthfully denies it, his relatives’ disbelief causes the bottled-up memories and emotions to endure.

The two discs of “Mr. Morale & The Big Steppers” reflect each other, which Lamar hints at on the finale, entitled “Mirror.” The titular songs, the interludes, the dysfunction of “We Cry Together” versus the normalcy of “Crown,” and the energetic “N95” opposite the hushed “Mother I Sober” are all equidistant from the album’s center. Lamar wallows in unhealthy addictions in the first half before vulnerably confronting his trauma in the second.

The album also addresses other significant matters. Dynamics of Lamar’s familial and romantic relationships are ever-present, such as on “Father Time.” His rejections of materialism and being worshiped as hip-hop’s savior — “celebrity do not mean integrity, you fool” — on tracks like “Savior” and “Rich Spirit” echo throughout the project.

Perhaps that’s where some of the album’s imperfections are. Without the pressures of saviorhood, Lamar makes artistic choices that seem to contradict his own messages, whether or not they’re intentional attempts at redemption. There’s multiple contributions from alleged sexual assaulter Kodak Black, a glaring contrast from Lamar’s reflectiveness about similarly traumatic events. On “Auntie Diaries,” a tribute to two transgender relatives, Lamar deadnames one and another celebrity, misgenders both relatives and drops the f-slur 10 times. Even though he’s rapping from the narrow-minded perspectives of his friends, past self and the Christian church, narrative context doesn’t fully justify these inclusions.

That said, on this LP, his last in a five-album record deal with Top Dawg Entertainment, Lamar yet again delivers something artistically salient and compositionally different. These songs wouldn’t fit alongside the ballads of a Comptonite on “good kid, m.A.A.d city” or the jazz-rap explorations of race and America on “To Pimp a Butterfly.”

After all, he hadn’t revealed a lot of what he was going through then.

— Liner Notes: On “Laurel Hell,” Mitski gets existential about her relationship with music

— Liner Notes: Bastille escapes to dystopia on “Give Me the Future”