The Daily Northwestern • May 22, 2022 • https://dailynorthwestern.com/2022/05/22/ae/liner-notes-harry-styles-delivers-romantic-personal-third-album/ 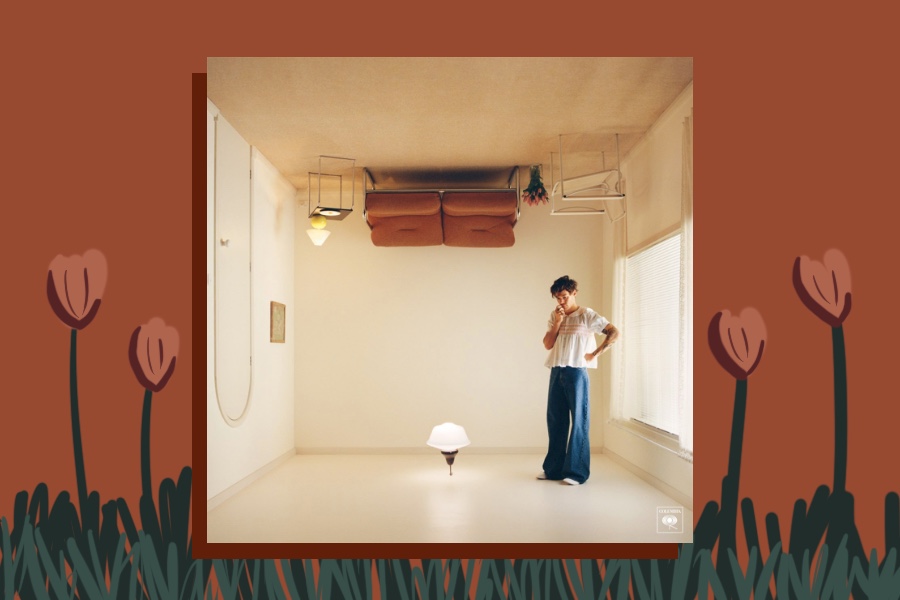 The album exudes contentment from the top, starting with three love songs. In comparison to his previous upbeat hit tracks, Styles’ tone is lighter. His voice sounds clearer and more present throughout, emphasizing the vulnerability in sharing his “house” with listeners.

The early standout is “Late Night Talking,” a simple but catchy track with a fun beat and melody that immediately makes me want to dance. Track three “Grapefruit” is Styles’ now-traditional fruit reference, adding to his collection of “Kiwi,” “Cherry” and “Watermelon Sugar.”

But it’s not all sunshine and rainbows. Styles has multiple quieter, reflective moments on “Harry’s House,” each with its own perspective. “Matilda” borrows Roald Dahl’s classic character to heart-wrenchingly honor a friend who’s moved beyond a neglectful home life, while “Boyfriends” sees Styles recognizing his own behavior in past relationships on behalf of boyfriends everywhere. Both songs’ stripped-down production show off Styles’ vocals and offer a slower-tempo break.

The lead single, “As It Was,” which broke the male artist world record for Spotify streams in 24 hours, offers an interesting paradox. While the music itself has an audible dance beat, the lyrics are sad and contemplative. Styles told Apple Music, “That’s always been the fun part about music. It’s so interesting  — a bunch of people dancing to your most devastating experience.”

There are a few outright silly lyrics on the album. The worst offender might be Styles’ repeated “I just think you’re cool … Do you think I’m cool too?” on “Cinema.” Also questionable is “Green eyes, fried rice / I could cook an egg on you” on “Music for a Sushi Restaurant.”

On the other hand, Styles makes the randomness work on “Keep Driving,” one of my personal favorite tracks. Many of the lyrics are tangentially related nouns, like “maple syrup, coffee” or “ash tray, swimming pool.” It’s a song about tuning out the rest of the world to focus on the little things in a relationship. Something about the way Styles lists each phrase on the repeating musical pattern is satisfying.

Styles also drops multiple R-rated references throughout the album, which is a development from his prior albums. I found three blatant mentions of cocaine throughout the project, as well as an explicitly sexual verse on “Cinema.”

This relaxation of his filter has more somber implications as well — most notably in the second verse of “As It Was,” where Styles imitates a phone call from a concerned loved one: “Harry, you’re no good alone / Why are you sitting at home on the floor? / What kind of pills are you on?”

While Styles has shared plenty of personal moments in his songwriting before, these are by far the most detailed. It seems he’s dropped all pretenses from his music. Combined with the album’s abundance of love songs, we come to know more about Harry through “Harry’s House” than we ever have before.

— Liner Notes: On “Laurel Hell,” Mitski gets existential about her relationship with music

— Liner Notes: Bastille escapes to dystopia on “Give Me the Future”

— Podculture: TikTok Back to Childhood Fandoms