The Daily Northwestern • May 20, 2022 • https://dailynorthwestern.com/2022/05/20/city/northwestern-center-offers-police-leadership-training-graduates-epd-leaders/ 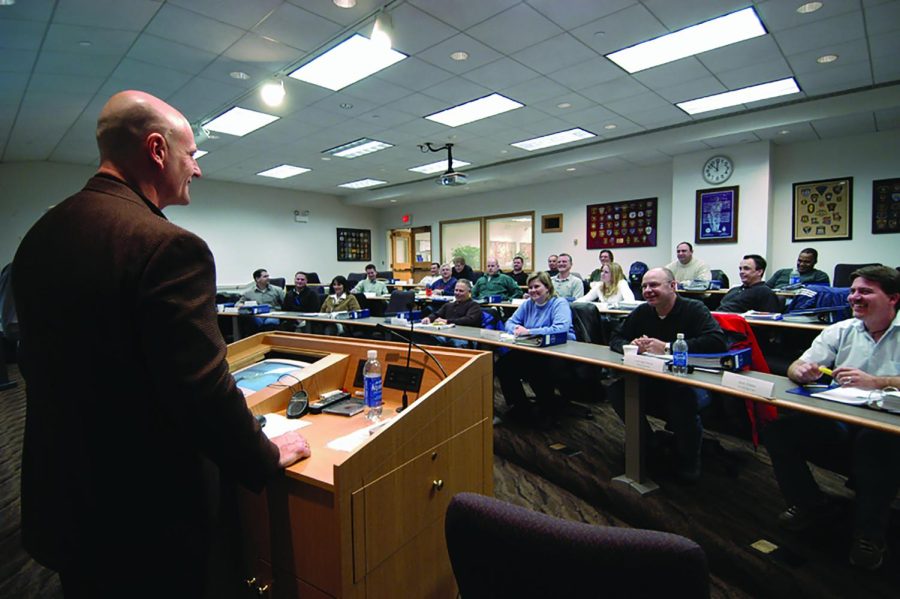 Courtesy of the Northwestern University Center for Public Safety

The Northwestern Center for Public Safety may fly under the radar for the University’s undergraduate community. But for decades, the program has trained the next class of law enforcement leaders for police departments in Evanston and across the nation.

Founded as the Traffic Safety Institute by an Evanston Police Department lieutenant in 1936, the center initially focused on traffic crash investigation and safety. Now, NUCPS primarily teaches public safety management and leadership, offering a ten-week intensive course called the School of Police Staff and Command. The course enrolls police personnel who already have some supervisory experience and are now looking to expand their skill set to rise through the ranks, according to NUCPS director Shelly Camden.

“We hope that they will come to us, and they will leave with a skill set that they know how to run a law enforcement organization,” Camden said.

About 600 to 700 officers nationwide graduate from NUCPS per year, according to Camden. Year-round, the Center offers its SPSC course online and on-site at departments across the nation.

EPD Deputy Chief Melissa Sacluti, a 2017 SPSC graduate, said she learned about the inner workings of a police department through the program. Officers from different agencies across the country take the course together, she said, making it a good forum to discuss similar issues they are facing.

“There’s a benefit to … being able to hear that there may be slightly different challenges, but overall, it’s the same and how are we, on a national level, how are we dealing with those challenges,” Sacluti said.

Sacluti now serves as an instructor for the program alongside her work at EPD. She said she found the course “career changing.”

“Your perspective completely shifts,” Sacluti said. “When you’re able to take a step back and look at everything as a system.”

At the end of the 10 weeks, students compile a “staff study,” in which they identify a problem in their home department and suggest a solution. EPD Sgt. Jason Kohl, who graduated from SPSC last year, said he developed an updated training plan for recently-promoted supervisors to smooth their transitions.

Kohl said the department has previously implemented suggestions from staff studies, and is currently considering applying his plan. For example, he said a previous SPSC staff study pushed EPD to add a compliance officer, who is tasked with ensuring the department’s adherence to new state mandates and training updates.

“We were able to centralize the training, and that person reported directly to the chief of police, so approvals could come quickly, funding, things like that,” Kohl said. “It definitely benefited the department as a whole.”

EPD also prefers officers graduate from SPSC before they are eligible for some leadership positions, Hart said. In some cases, officers attend SPSC directly after their promotion. During Hart’s time at the school, he was promoted from sergeant to commander.

Camden said there has been a recent uptick in EPD enrollees in SPSC. The department has also experienced a high rate of turnover in the past year.

EPD has had three police chiefs in the past year, with a new police chief set to be named in the coming weeks. Evanston hosted a town hall Wednesday that solicited resident feedback about the priorities they sought for a new chief. The city plans to host two more town halls on May 24 to gather input from Black and Latine residents.

Sacluti, who is involved with sending EPD officers to SPSC, estimated EPD has sent at least a dozen officers to SPC since 2017. She said the school has played a part in EPD’s recent “succession plan.”

“Although it hasn’t been vocalized, we need a succession plan in place,” Sacluti said. “The people that are climbing up through the ranks now are just going to keep climbing as people leave and we lose people through retirements and everything else. So it is important that all of them get this training.”

EPD values SPSC’s programming, Sacluti said, because it allows officers to get “exposed to bigger things outside of just our police department.” Sacluti said CSPC is committed to giving officers the tools to better serve not only their department, but most importantly, their communities.

“You can feel from the moment you start this class, you can feel that the whole staff at Center for Public Safety –– they want us to succeed,” Sacluti said. “They know that everything they do or say has a direct impact on what we bring back to our police departments, and how that directly impacts the communities that we serve.”