The Daily Northwestern • May 20, 2022 • https://dailynorthwestern.com/2022/05/20/city/evanston-residents-protest-city-manager-selection-process-during-state-of-the-city-event/ 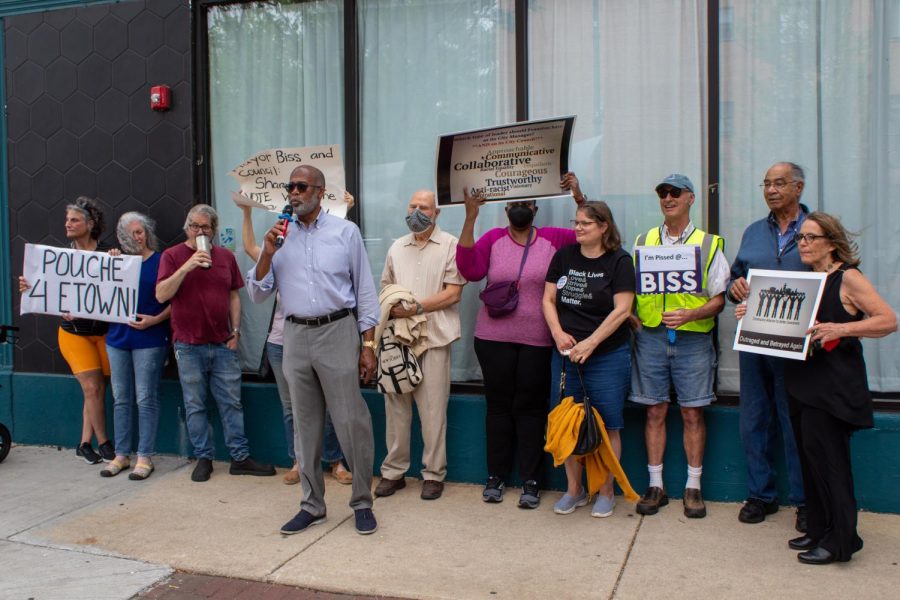 About twenty Evanston residents gathered in front of Palmhouse, an event venue on Howard Street, Friday morning to protest the city’s selection process for its next city manager.

On May 13, the city announced its intent to appoint John Fournier, currently the assistant city administrator of Ann Arbor, as Evanston’s next city manager. However, protesters said they felt City Council had not involved residents enough in the selection process and that Fournier was the wrong choice for the position.

“This is our third iteration of trying to find a city manager, and the first two were more transparent, but with this last one, the transparency just became less,” said Rick Marsh, president of the Community Alliance for Better Government. “We’re here to express our disappointment in how this process has gone in terms of community input.”

Members of CABG, Reclaim Evanston and several other local groups at Friday’s protest said they learned Fournier has a track record of racial discrimination in hiring practices. Ann Arbor city government investigated complaints of discrimination and budget manipulation against Fournier in 2021 but found he had not violated city law.

Fournier was one of two finalists selected from a nationwide pool during Evanston’s city manager search. On May 4, he participated in a town hall with the city’s other finalist, Snapper Poche, who is the program director for the Bloomberg Harvard City Leadership Initiative.

On Friday, protesters told The Daily they thought Poche would be the better choice for city manager, citing his leadership experience and commitment to climate action.

“(Ann Arbor) has the exact same problems we have, and (Fournier) has been there for years, and I don’t see that he solved any,” CABG member and former 7th Ward aldermanic candidate Mary Rosinski said. “They just came out of a scandal, they just came out of budget problems … it’s time we finally start with a clean slate here.”

As the protest continued right outside Palmhouse, Evanston residents and officials filed into the venue to attend Mayor Daniel Biss’s first State of the City address, hosted by the Evanston Chamber of Commerce, at $75 a head.

On his way into the venue, Biss told The Daily he was excited to see civic engagement at any event and that his team had already made public its thoughts on next steps for city manager selection.

Biss’ predecessor, former Mayor Steve Hagerty, also spoke with The Daily on his way into Palmhouse. He said since the beginning of the city manager selection process, he felt CABG had been dissatisfied every step of the way.

“From somebody who pays close attention to what goes on around town, I think there has been a lot of transparency in the process of selecting our next city county city manager,” Hagerty said.

Alds. Jonathan Nieuwsma (4th) and Peter Braithwaite (2nd), along with University President Morton Schapiro, also walked past the protest on their way into the event, stopping to speak with residents.

Protesters cheered as Ald. Clare Kelly (1st) — who Evanston resident Leslie McMillan said had been the only councilmember fighting for greater transparency in the city manager selection process — walked past the small crowd and into Palmhouse.

Fournier’s intended selection comes at the end of a months-long search to fill Evanston’s city manager position. Former City Manager Erika Storlie left office in October following allegations of a culture of sexual misconduct on the lakefront and was succeeded by Interim City Manager Kelley Gandurski.

The city hired consulting firm CPS HR to carry out the initial city manager search. In January, Evanston announced Daniel Ramos and Michael Jasso as the two finalists, but Ramos withdrew his application after accepting a different position, leading the city to restart the process with another firm, Stanton Chase, which the city contracted for $70,000.

Several protesters said Friday they felt this lengthy process contributed to the city’s haste and lack of clarity with this round of city manager selections.

Former City Council candidate Darlene Cannon, a member of both CABG and Reclaim Evanston, said going forward, she wants to see more transparency about councilmembers’ rationale behind preferring Fournier, as well as information about which councilmembers supported him during closed-door discussions.

As a city that has historically overlooked the interests of Black residents, she said vetting these issues in Fournier’s background is crucial.

“I would like people to own up to those campaign promises of true accountability and true transparency that they touted during the campaign,” Cannon said. “They were saying that they were going to welcome citizen engagement and public comments — and the public has spoken.”

— The Daily Explains: What is a city manager?