The Daily Northwestern • May 20, 2022 • https://dailynorthwestern.com/2022/05/20/campus/nu-festival-of-languages-and-cultures-showcases-linguistic-diversity/ 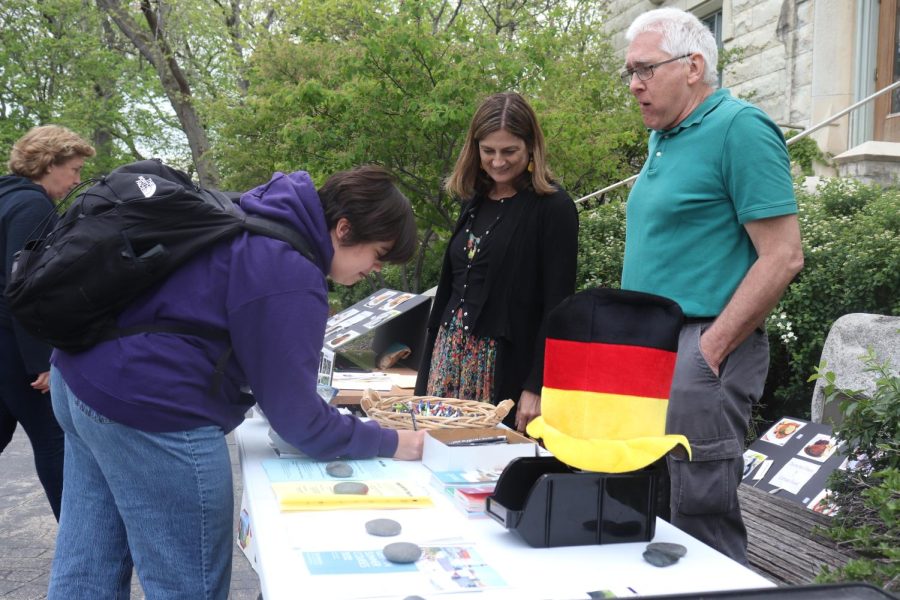 For the Northwestern Festival of Languages and Culture, language departments set up tables in front of The Rock for the community to learn about NU’s language opportunities.

Northwestern is celebrating the diversity of its community by hosting an inaugural Festival of Languages and Cultures. From May 16 to 20, language programs have been collaborating to offer opportunities for students to learn about a variety of languages and cultures.

All week, language programs have set up tables with snacks and small games around The Rock in the morning, hosted afternoon language gatherings encouraging cultural conversations and screened foreign films in the evenings.

“We want to celebrate languages, cultures and diversity, and we want everyone to see the beauty of diversity and of collaboration,” Zeller said. “And, of course, we want to give students the opportunity to find out about the different language programs.”

Planning committee member and African Studies Prof. Peter Mwangi said he hopes the fair will spread awareness about NU’s Swahili language courses. Swahili is a less commonly spoken language, he said, and he wants to boost enrollment of Swahili classes through the fair.

On Monday and Thursday, the Swahili language program had a table by The Rock that offered East African chai, African donuts and sambusas.

“You’re giving (people) respect when you learn their language,” Raddawi said. “Language is a bridge to culture, (to) becoming more tolerant, more open minded to other cultures that sometimes are very different from yours.”

As part of the festival’s programming, Weinberg junior Cat Jacob, who studies Arabic, organized a Friday presentation on Middle Eastern history and contemporary politics. The presentation will trace the legacy of colonization in the region and address the stereotypes that shape Western political perceptions of the Middle East, Jacob said.

As a political science student, Jacobs said she is interested in hearing about other students’ interactions with popular culture and the Middle East. She said the presentation aims to facilitate discussion.

“The lack of education (on foreign policy) is one of the biggest issues I see in my fellow students,” Jacob said. “I hope that people understand the broader historical perspective that informs the context of what they’re seeing on the news today.”

Jacob is Iraqi and Mexican, she said, and her family is from a Catholic ethnic subsect in northern Iraq. For generations, Jacob’s family has made culturally significant Middle Eastern Christmas cookies. Many people are unaware of the religious plurality in the Middle East, she said.

“My connection to other Middle Easterners is not through religion but through food and culture even though I’m not celebrating the same holidays,” Jacob said.

The festival will culminate with a variety show featuring live music, dances and skits Friday evening. Through participating in raffles, audience members can win multicultural items.

Portuguese Prof. Ana Thomé Williams helped organize the festival. She said performance allows students to engage with language in a creative way. When people learn a language, they learn more about themselves, she added.

Williams said studying new languages encourages cross-cultural understanding. The festival, she said, is a space where people can adjust their ways of understanding one another.

“(Language) is a life project,” Williams said. “Learning a language is about transforming the world into a better place, a more connected place.”

This article has been updated to include comment from Arabic Prof. Rana Raddawi.