The Daily Northwestern • May 19, 2022 • https://dailynorthwestern.com/2022/05/19/lateststories/evanston-residents-provide-input-at-town-hall-as-new-police-chief-search-continues/ 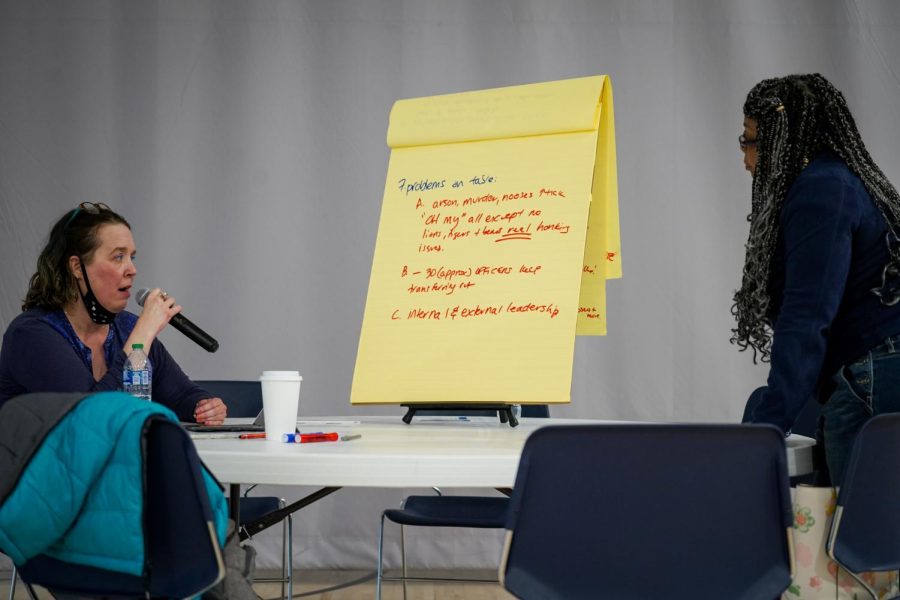 Evanston residents listed crime, EPD officer departures and internal and external leadership as challenges the new police chief will have to address.

Evanston residents said they hope to see responsiveness, empathy, approachability and community engagement as key traits of the new Evanston police chief at a Wednesday Police Chief Town Hallas the role is set to be filled in the coming weeks.

The event, which was held at the Robert Crown Community Center, was hosted by the city and facilitated by Envisioning Equity,  a consulting organization that focuses on dismantling systems of inequity.

Facilitators provided residents with several discussion questions and gave them time to write down qualities they want to see in a future police chief. Several attendees reported back to the larger group with their thoughts afterward.

During the discussion session, residents listed inaccessibility, top-down authority and arrogance as problematic characteristics. Multiple residents said they want the new chief to show real commitment to creating change within the community.

She said she wants to see someone with a track record in tangible action who is committed to centering the needs of the most at-risk residents instead of allowing white people to prioritize their own concerns.

In listing values and philosophies they want in a police chief, residents also wrote down honesty, a focus on public safety beyond policing and “equal treatment in the area of cultural diversity.”

Patricia Santoyo-Marin, a consultant at Envisioning Equity and deputy director for diversity and inclusion for the State of Illinois, told attendees that facilitators aimed to be inclusive of everyone’s’ voices and center items that are important to residents.

Richard Eddington, who had previously served as chief and came out of retirement to act as the department’s interim chief this year, is the third person to lead Evanston Police Department in the past year. Demitrous Cook retired in June 2021 following a 2020 lawsuit that involved the online posting of Evanston residents’ private information. Aretha Barnes, who took up the role after Cook, retired in January.

The police department also faced a large number of resignations last year. This development contributed to unexpected expenditures due to pension payments, according to Hitesh Desai, the city’s chief financial officer and treasurer.

First Ward resident Brooke Murphy Roothaan pointed to EPD’s inability to retain officers as one of the many challenges the new police chief will have to address.

“(Success) comes down to looking at, what is their desire?… what’s missing?” Murphy-Roothaan said.

Residents also said they plan to judge the chief by their history of working with a variety of first responding departments, among other things.

Mayor Daniel Biss said the event offered an opportunity for structured, moderated conversation to find some agreement on what the community is looking for in a new chief.

Biss acknowledged that attendance at the town hall was low, with fewer than 10 participants, emphasizing that further conversations would follow.

He said this conversation is critical because the police chief is “the next most important person besides the elected officials” in setting the approach, philosophy and style of policies and procedures citywide. Given his understanding of how deeply the new chief’s choice will affect community climate, Biss added that the search for the new chief must consider how these policies can help achieve equity and racial justice.

Ald. Devon Reid (8th) previously told The Daily the city is expected to name a permanent police chief sometime this summer. John Fournier, who City Council announced Friday it intends to select as the next city manager, will have jurisdiction over the police chief search if appointed.

The city plans to host two more town halls on May 24 to gather input from Black and Latine residents. The first will be held at the First Church of God, Santoyo-Marin said, while the second will be held in Spanish at St. Nicholas Parish. Both Santoyo-Marin and Biss encouraged residents to share the information about the coming events with their neighbors.