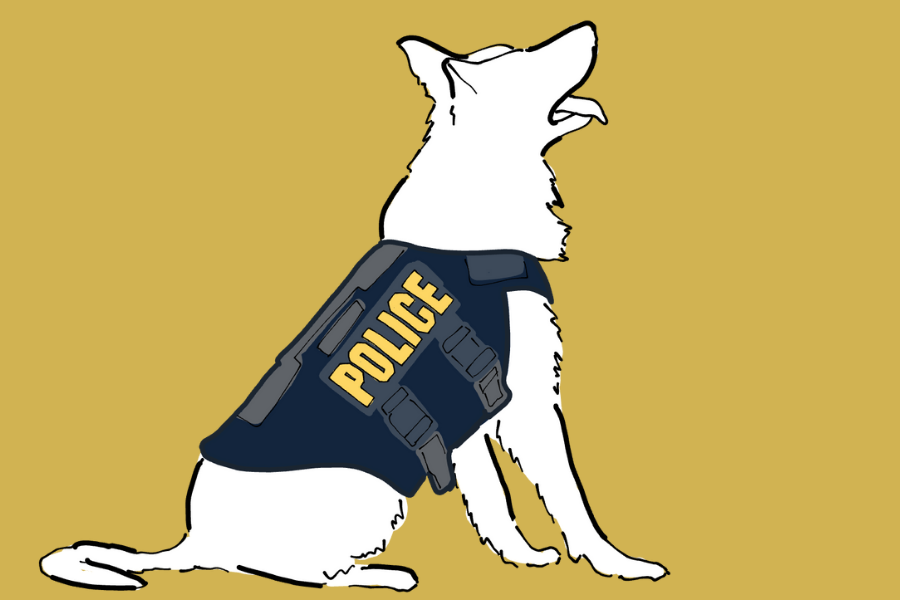 Aston, the Evanston Police Department’s K-9 police dog, both locates suspects based on scents and identifies narcotics at crime scenes.

Evanston police officer Random Johnson’s partner is a 4-year-old from the Czech Republic. Every day, he rides along in Johnson’s patrol car, responds to calls with him and even returns to Johnson’s house when the day is over.

“We’re a separate entity to an extent, but we are still assigned to patrol so we still answer the radio, we take on patrol calls,” Johnson said. “However, some incidents that require canine-specific skills do come up.”

Aston is a dual-purpose dog, which means he’s trained in patrol — locating evidence and apprehending suspects — as well as smelling for narcotics. Officers typically call in Johnson and Aston when searching for a suspect, items with a suspect’s odor or drugs. During a recent string of burglaries in Evanston, Johnson said Aston was able to locate stolen electronics and other items that a suspect had left beneath a vehicle.

To train for his current role, Johnson attended K-9 school in early 2019 at Shallow Creek Kennels, a police dog training school in Sharpsville, Pennsylvania. He said he spent six weeks there learning how to work with Aston.

At Shallow Creek, dogs first receive individual training in obedience and basic skills needed to be a K-9. The purpose of the six-week intensive course is to acquaint the dog with the handler.

While many assume that police dogs are trained to be aggressive, Johnson said they are really just learning to play a game.

“Everything that they’re doing is a game with an objective at the end of it,” Johnson said. “When they locate an odor, they get a reward like a tennis ball or a tug toy. It’s just playtime.”

Johnson said he always carries a large, bright orange toy with him that he gives to Aston after searches.

Alex Rothacker is the owner of TOPS Kennels, a police dog training facility in Grayslake, Illinois. He said his company purchases the dogs, pre-trains them and then offers K-9 training for handlers.

According to Rothacker, TOPS Kennels looks for dogs that are friendly and “crazy for a toy.” Rothacker said he “100%” trains K-9 dogs at his dog school to be aggressive toward perpetrators.

“A police dog, when it’s trained properly, just finds one spot (to bite) and hangs on,” Rothacker said. “That, in my book, has been one of the most important things.”

Johnson said Aston’s role as a protector is relatively minor, but the dog has strong intuition as to when his handler is in a dangerous situation.

K-9 units from the Northern Illinois Police Alarm System Mobile Field Force helped form police barricades at the NU Community Not Cops protests in 2020. Although EPD is a part of NIPAS, Johnson said EPD does not use K-9s for crowd control.

While Aston’s training is specialized in detecting the smell of humans and drugs, much of his days are spent accompanying Johnson in whatever he’s doing. Johnson’s car is designed for riding with K-9s — it has enough room for Aston to walk around, and Johnson has a button on his belt that opens the door if he needs to let Aston out.

Johnson recalled one time he got called for a recent traffic accident with Aston in his patrol car. He talked to the people involved and filed a report, while Aston stayed behind in the car.

“My dog was with me because he’s my partner, but he wasn’t utilized in a way other than being present with me,” Johnson said. “I can’t emphasize that enough.”