The Daily Northwestern • May 18, 2022 • https://dailynorthwestern.com/2022/05/18/sports/price-this-is-for-all-the-marbles-northwestern-must-sweep-minnesota-to-make-the-big-ten-tournament/

Price: This is for all the marbles. Northwestern must sweep Minnesota to make the Big Ten Tournament 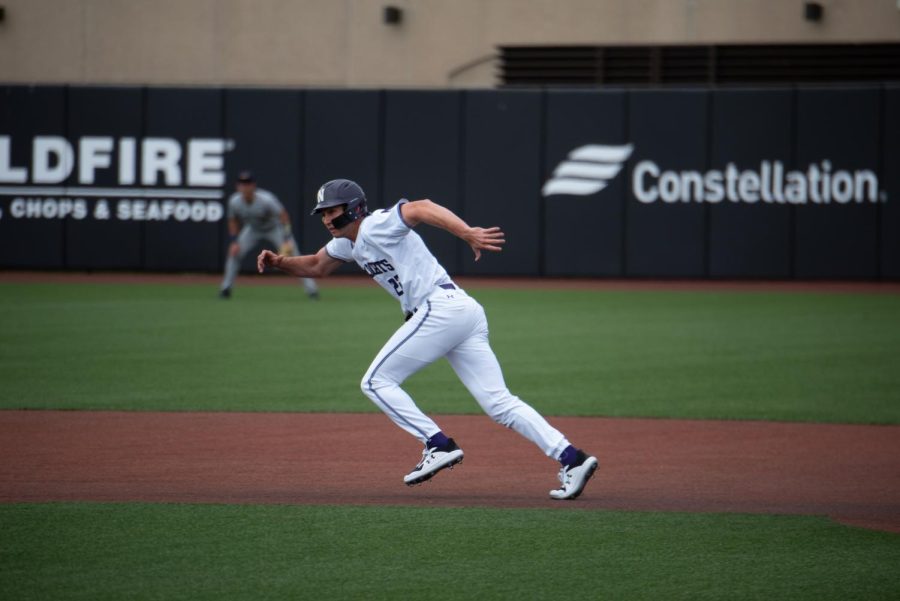 Sophomore left fielder Jay Beshears takes off running. The team’s hit leader added to his breakout season with another hit in the Tuesday loss to No. 14 Notre Dame, 14-4.

A lot has changed since 2017 in Northwestern Athletics: Welsh-Ryan Arena has been renovated, multiple Big Ten and national championships have been secured and many coaches and players have come and gone.

But one thing that has stayed the same is this baseball roster’s trips to the Big Ten Tournament: zero.

Because of a shortened season due to the COVID-19 pandemic and multiple sub .500 seasons, NU hasn’t finished in the top eight of the conference record-wise since 2017, which ended in a second place tournament finish.

The program is currently tied with Nebraska for the ninth best record in the Big Ten entering the last weekend of the regular season against Minnesota (15-34, 5-16 Big Ten). That isn’t good enough to make the Big Ten Tournament. Only the top eight teams continue their season, emphasizing the importance of the Cats’ play in hopes of making it to Omaha.

Even with this exciting opportunity to break the five-year streak, though, NU can only blame itself for its current position. There were numerous games throughout the season that the Wildcats let slip out of their hands. But less than two weeks ago, the Cats were sitting pretty, flexing a .500 record and a sixth-place standing in the conference, with a second-to-last place Ohio State Buckeyes team up on the schedule.

Everything went wrong that weekend. NU dropped all three contests on its home turf, including a 16-run Saturday loss. The team also lost this past weekend’s series to Purdue, the conference’s eighth-place team, leading to the Cats’ ninth place landing.

Although these miscues can’t be overlooked, and the poor performing series will be viewed as the major reason behind NU’s demise, the Cats can still make it to Omaha, as the Boilermakers face the conference’s top team this weekend in Maryland. On the other side, NU travels to Minnesota to compete against the Big Ten’s worst team.

With the difference in opponents, the jump to the eighth seed is very possible, but NU must sweep Minnesota to keep these hopes alive. Through this sweep, if Purdue is swept or loses two of its three contests, the Cats will move into the last seed of the tournament. Every game, inning and throw could be the deciding factor if they will take the field on May 25. Between that and the five-year drought, the pressure is on.

Although tensions are high leading up to Friday’s first pitch, NU does deserve praise. It overcame many changes and losses during the offseason, including five everyday starters, consistent arms and its head coach. Even with their slow start and roster changes, a sweep this weekend could not only send the Cats to the tournament, but secure the program’s best overall record since 2003 as well.

However, that possibility won’t mean much if the Cats can’t capitalize.

There’s no reason to beat around the bush here: NU needs to win all three games to keep its season alive. And in coach Josh Reynolds’s first year at the helm, it would be the cherry on top.