The Daily Northwestern • May 18, 2022 • https://dailynorthwestern.com/2022/05/18/ae/the-freshman-musical-returns-to-the-stage-with-a-video-game-twist-on-heathers-the-musical/

The Freshman Musical returns to the stage with a video game twist on ‘Heathers: The Musical’ 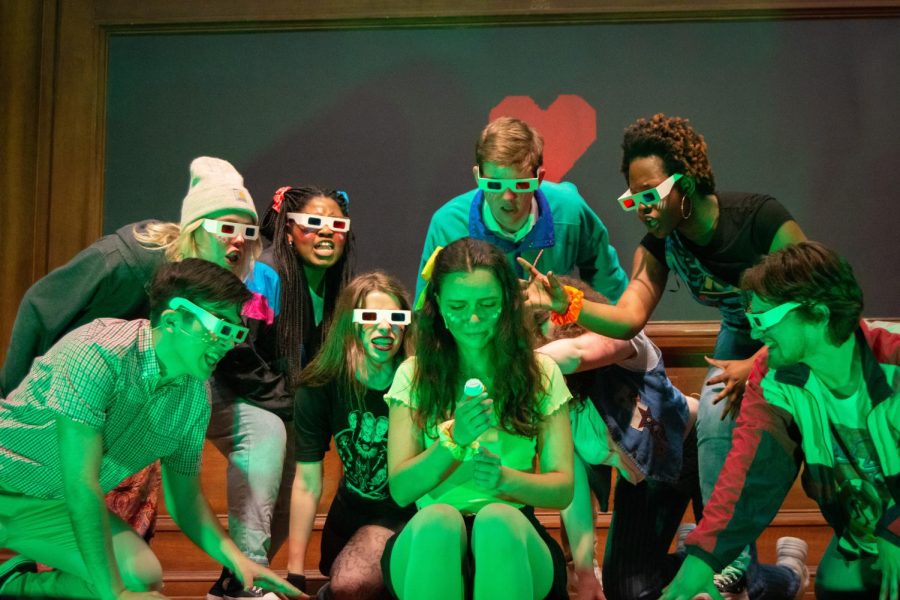 Content warning: This story contains a mention of suicide.

After two years of online productions, the Freshman Musical made a live-stage comeback with “Heathers: The Musical” at Harris Hall on Friday and Saturday.

When Communication freshman Lili Tarnopol heard she would play the lead role of Veronica, she said she could barely contain her excitement.

After not being cast in any shows Winter or Spring Quarter, she didn’t know whether she would be on stage anytime soon.

“I hadn’t done theatre in so long, and that combined with not getting cast the whole year up until Freshman Musical, I felt so defeated, and I started to not view myself as a very castable person,” Tarnopol said.

Once cast, she became part of the annual seven-week-long process where a cast and crew, made entirely of freshmen, gather to produce a musical.

Communication freshman and co-Director Julie Monteleone said the crew chose “Heathers: The Musical” not only because it is a classic set in the ʼ80s, but also because it is relatable.

“It’s so much about returning to being a child and trying to still hold on to some innocence and joy even when the world is crazy, which feels always applicable, like being in the pandemic and in college,” Monteleone said.

Being in a low-pressure setting like The Freshman Musical allowed for more creativity, Tarnopol said. She pointed out how the crew made the color orange a motif for danger, which repeatedly appeared in props like guns, a bomb and even a scrunchie.

The crew also put an original video game twist on the production, transforming Harris from a lecture hall into an arcade. Monteleone said the decision stemmed from having to grapple with the original musical’s violent moments, like suicide and bullying.

“As an artist, I’m really interested in finding ways to make theatre still safe while telling difficult stories,” Monteleone said. “The game allowed us to make (the production) even more absurd and highlight the fact that none of this is real, and it shouldn’t be real, but we’re still using it to tell a story.”

Tarnopol said “show week” was one of the most emotionally draining weeks of her life, because in addition to the busy schedule, she worried about a stye in her eye and felt anxiety about the recent spike in COVID-19 cases. Another lead contracted COVID-19 two days before performing, she said, and a choreographer had to step in and learn the role in one day.

However, Tarnopol said the performances made all the anxiety worth it. She said Friday night’s shows were full of energy and that the week ended with lots of tears and laughter.

McCormick freshman Fay-Ling Laures, who plays Principal Gowan, also said she enjoyed watching the show come together. Acting as an ensemble member allowed her to partake in a vastly different experience from her academics, she said.

“At the beginning, you split it up into song or into scene, and you’re like ‘Oh my gosh, we’ve been drilling this forever,’ but when it comes down to putting it together, you’re like ‘Holy s–t, that’s why we’re drilling it — I see it now,’” Laures said.

Tarnopol said she enjoyed the challenge of playing Veronica and also loved working with an all-freshmen cast and crew.

The lack of a hierarchy or an adult leader made the entire process feel more collaborative and friendly, she said.

“I couldn’t have asked for anything better than acting with my friends, being directed by my friends in a show designed by my friends,” Tarnopol said. “It was just like such a nice way to end the year, to have something to show for the time I’ve spent here.”

— Freshman Musical to virtually premiere “The Theory of Relativity”