The Daily Northwestern • May 16, 2022 • https://dailynorthwestern.com/2022/05/16/opinion/parham-beyond-housing-inequities-in-evanston/

Parham: Beyond housing inequities in Evanston 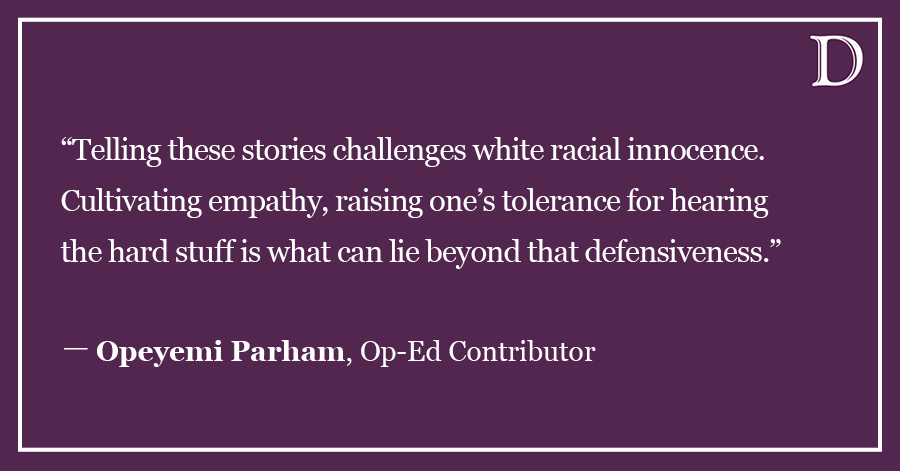 Evanston’s reparations program is currently focusing on addressing financial inequities for the generations of Black folks greatly discriminated against in housing opportunities from the 1920s through the 1970s. My own family was able to own homes but still suffered significantly from racism in 1950s and ʼ60s Evanston.

My aunt Dot’s dreams of heading south to farm our Georgia land were dashed when she “accidentally” won a scholarship to Howard University by earning top marks on a scholarship qualifying test. Consequently, she studied the closest thing to farming available at a “talented tenth” traditionally Black college: botany. She returned to Evanston, where there were no jobs in botany, nor opportunities to learn how to farm. Instead, she became a switchboard operator with a telephone company.

In Evanston, she fell in love with a Black man who had dropped out of high school to marry the girl he impregnated before he fell in love with my aunt. He divorced the mother of his child. He and my aunt married. They never had children together, despite multiple attempts.

We didn’t talk about out-of-wedlock pregnancies of the 1950s. I know between my three aunts and my mother, there were several abortions. My aunt Dot had one during her college years, and she did not fare well. Whoever terminated Dorothy’s pregnancy also terminated her ability to hold a baby to term, leaving her with an “incompetent cervix.”

She would try a dozen more times to have a baby, but every time she miscarried before four months.

With that twelfth pregnancy, she was referred by her Black general practitioner to a white obstetrician/gynecologist. Under his care and supervision, she carried the pregnancy to five months, much longer than any of the other 11 times. Then, in his office at her fifth month check-up, he informed her he wouldn’t deliver her baby. His hospital “did not admit Negroes.”

She left his office, and refused to return to his care. Two weeks after that humiliating visit, she lost the pregnancy. She gave birth in a hospital to a stillborn infant; after 20 weeks, this is no longer considered a miscarriage.

Those are some details of what life looked and felt like, for one branch of my family, in de facto segregated Evanston.

My aunt Dot and her husband owned their own home on Lyons Street in the 1960s. When my grandmother died, the Sherman Avenue home she and my grandfather had struggled through a 15-year mortgage to own was sold, with consciousness, to other Black folks. Family stories recount the Black couple immediately “flipped it” and sold it to white residents as that part of Evanston gentrified.

My aunt and uncle did well, selling their Evanston home for a profit. Newly ensconced in Los Angeles, they were able to invest in a home in Baldwin Hills above the Crenshaw District in what is known as the Black Beverly Hills.

They moved to LA largely to escape the humiliations and dead ends presented to them in Evanston. De facto segregation was present in LA, but it was not as toxic as in Evanston. They joined a thriving community of fellow transplanted Black Evanston residents.

My mother died at age 56 of end-stage renal disease. Her father, Alfred Parham, died at 69 of uremic poisoning — what we called end-stage renal disease in the mid 1960s. My aunt’s husband died of kidney cancer in his late 50s. I don’t believe these premature deaths were related to bad genes. I believe they were related to years of stress from being middle class Black folks, attempting to carve out space for themselves in a town that consistently resisted integration.

We now have a term for the stress Black women experience: We call it “weathering.” All those kidney ailments make sense. Louise Hay agrees. In an integrative health model, she suggests kidney problems represent emotional issues with criticism, disappointment, failure and shame.

While several in my family found their way to wealth as property owners in Evanston, my predecessors’ lives were scarred by disappointment, failure and humiliating experiences. I was inspired to write this series because Evanston is leading America in a conversation about financial reparations to Black people who lived in 1920s to1970s Evanston. I wanted to share family stories that have contributed to my deeper understanding of what Evanston withheld from Black residents, while smiling and convincing ourselves how lucky we were to have any access at all to “The American Dream.”

My entire adult life, I have interacted with white people who will do anything to avoid being hooked into feeling the pain a Black person might have experienced, pain from which they were protected by white privilege. Telling these stories challenges white racial innocence. Cultivating empathy, raising one’s tolerance for hearing the hard stuff is what can lie beyond that defensiveness.

At 65 years old, I feel complete. I appreciate the white readers who are able to stomach hearing more about the bad parts of life for Black folks in Evanston, the Black folks who managed to survive and thrive in a challenging environment and everyone else who was willing to read these three essays.

Opeyemi Parham is a retired M.D. who writes as an artist, healing. If you would like to respond publicly to this op-ed, send a Letter to the Editor to [email protected]. The views expressed in this piece do not necessarily reflect the views of all staff members of The Daily Northwestern.