The Daily Northwestern • May 16, 2022 • https://dailynorthwestern.com/2022/05/16/opinion/griffith-are-you-still-watching-examining-netflixs-woes/ 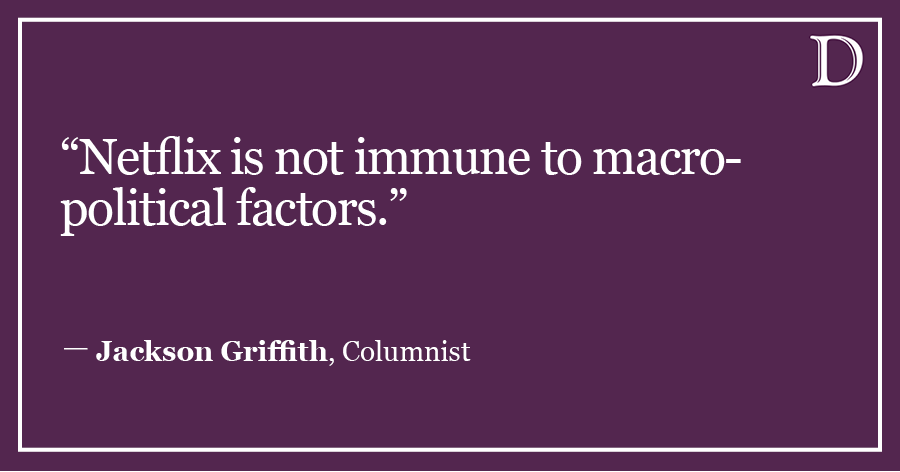 In the last year, Netflix ($NFLX) lost nearly $200 billion in value, a nearly 70% drop in its stock price year-to-date. This comes on the heels of a quarterly earnings report showing a decrease of about 200,000 subscribers on the platform for the first time in a decade. More surprisingly, Netflix forecasted a loss of 2 million subscribers for Q2 2022, a 2% decrease.

These issues have raised uncertainty about Netflix’s future as competitors carve out larger market shares. Disney+ saw an 11.8 million subscriber increase last quarter, and HBO Max gained 3 million subscribers. Netflix has floated the idea of offering a cheaper, ad-based tier as early as this year, a reversal of its historical attitude towards ads.

A few things stuck out to me in the earnings report. Netflix is not immune to macro-political factors. Following the Russian invasion of Ukraine, Netflix suspended its service in Russia, resulting in a loss of 700,000 subscribers. Factoring that out, Netflix would have actually gained 500,000 subscribers last quarter. Netflix also cited the easing of COVID-19 pandemic lockdowns as a justification for slowed growth. I think perhaps, the historical inflation we are experiencing forced families to cut the $10 per month subscription from their budget.

This isn’t the first time Netflix has faced challenges in its 24-year history. Its more recent woes have motivated me to examine its previous struggles. Netflix truly did revolutionize entertainment, starting with a DVD rental-by-mail model. In 2006, Netflix earned $1 billion in revenue and had more than 6 million paid subscribers. Diverting from this model that earned Netflix billions in less than a decade was a huge risk, and it’s visible Netflix was hesitant to stray too far from the DVD by mail service.

In 2007, Netflix began offering streaming movies to its subscribers on their website. This offered a selection of 1,000 titles for streaming, compared to more than 70,000 DVD rentals. This feature allowed users of the highest tier subscription up to 18 hours of streaming a month on top of rentals, while the lower tier got six hours of streaming and one rental. This “Watch Now” feature had a mixed reception with most users complaining about the thin selection and hourly caps on viewing. This soft rollout can also be attributed to limited technology at the time. The “Watch Now” feature was only available on Internet Explorer and Windows.

In 2011, Netflix split its subscription into separate tiers, one for streaming and one for DVD rentals, both priced at $8 a month compared to the $10 price for both services the company previously used. This 60% price hike for subscribers who used both services infuriated customers. Netflix fumbled its response and decided to branch off a subsidiary called Qwikster for the DVD rentals and Netflix would be used solely for streaming. This decision cost Netflix 800,000 subscribers in Q3 2011 and the stock slid 35%. Netflix quickly scrapped the Qwikster plan and resumed one subscription allowing both rentals and streaming. These vacillations had analysts questioning if Netflix had a long-term future in streaming.

As we know, Netflix did make it out of that disastrous quarter. Following a number of strategic partnerships, global expansion and doubling down on original programming, Netflix was able to reach more than $5 billion in revenue in 2014. In 2020, it had nearly $25 billion in revenue and 200 million subscribers.

It will be interesting to see what Netflix executives have planned for the future. The entertainment company has begun expanding into video games, hiring a VP of game development and acquiring multiple gaming studios. It has continued to double down on original content, creating some of the most streamed shows of all time, including Squid Game, Bridgerton and Stranger Things. Netflix is also exploring a live streaming service, opening up possibilities for non-scripted content and audience participation.

I believe Netflix is capable of navigating out of this slump, just as it did in 2011.

Jackson Griffith is a First-Year graduate student in the Master’s in Public Policy and Administration Program. He can be contacted at [email protected] If you would like to respond publicly to this op-ed, send a Letter to the Editor to [email protected] The views expressed in this piece do not necessarily reflect the views of all staff members of The Daily Northwestern.