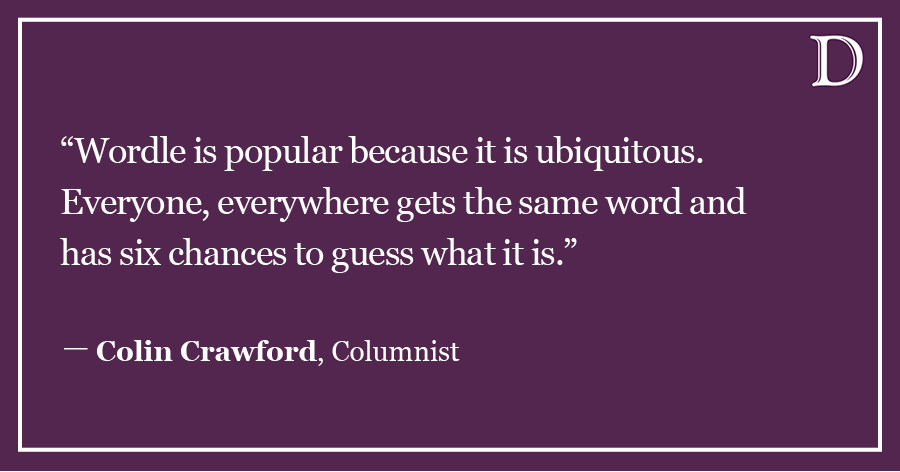 Almost everyone I know has been playing Wordle for the past few months. I got into the game pretty regularly last quarter as a means of connecting with family and friends. Being far from home makes it hard to maintain close relationships, but Wordle allowed me to bond with people back home over struggling — and usually succeeding — in tapping out the winning response.

But this beloved pastime of mine is not what it once was. Twice in the last two weeks, those sought after five green squares have been different for users depending on if they refreshed their browser tab or not. The New York Times bought Wordle from its creator in January in a seven-figure deal, but I can’t help but wonder whether this acquisition was in the public’s best interest.

The NYT was concerned that the word for the May 9 puzzle, “fetus,” was insensitive considering the timing — which it was. The Supreme Court draft opinion overturning Roe v. Wade had been leaked just days prior. However, instead of altering the word for everyone, it only worked for some. Changing that word must have messed something up because just a few days later, some players got the word “gecko” while others got “butch.”

It seems highly unlikely that the NYT, a mega media company, was unable to fix Wordle’s preloaded words in time. To me, the more likely scenario is that in the scramble to acquire a hot new word game, the NYT failed to properly integrate Wordle into its games portfolio.

Without uniformity in the answer, where is the joy in sending your relatives and friends your stats? Some words are arguably much harder to guess in six attempts than others, so if people have different words, what are they playing for? Their own entertainment? These mistakes undermine the whole reason for playing Wordle.

I do not play Wordle because I want to test my own intelligence. I play because it is a fun medium for me to interact with my friends. Wordle is popular because it is ubiquitous. Everyone, everywhere gets the same word and has six chances to guess what it is. The NYT’s mishandling of this situation shows that its eyes are bigger than its stomach when it comes to acquisitions.

Even though the NYT says it is working on the technology to ensure everyone actually does get the same word — the modus operandi of the game — I feel like there are more than a few ways to improve Wordle. Wordle’s path forward to a more fun and interactive user experience is customization.

Being able to change the color of the tiles to incorporate other colors instead of green and that sad yellow-orange grapefruit color would make the game more personal to users. I myself am partial to a nice blue and changing the tiles to a color of my choice would be incredibly satisfying.

Another source of customization is font. Not everyone loves the Wordle font, and I think the NYT is really just trying to weld this game to its brand. It is important to remember that Wordle used to exist independently from the NYT and, therefore, should be different from the other games available on their website.

Wordle is one of my nighttime rituals. I play it everyday because the results connect me to the people I care about, no matter how distanced we may be. The NYT’s bungling of the game won’t change that, but there is certainly room for improvement.

Colin Crawford is a Medill freshman. He can be contacted at [email protected]. If you would like to respond publicly to this op-ed, send a Letter to the Editor to [email protected]. The views expressed in this piece do not necessarily reflect the views of all staff members of The Daily Northwestern.