The Daily Northwestern • May 16, 2022 • https://dailynorthwestern.com/2022/05/16/campus/northwestern-hosts-second-year-prom-to-give-students-a-milestone-experience/ 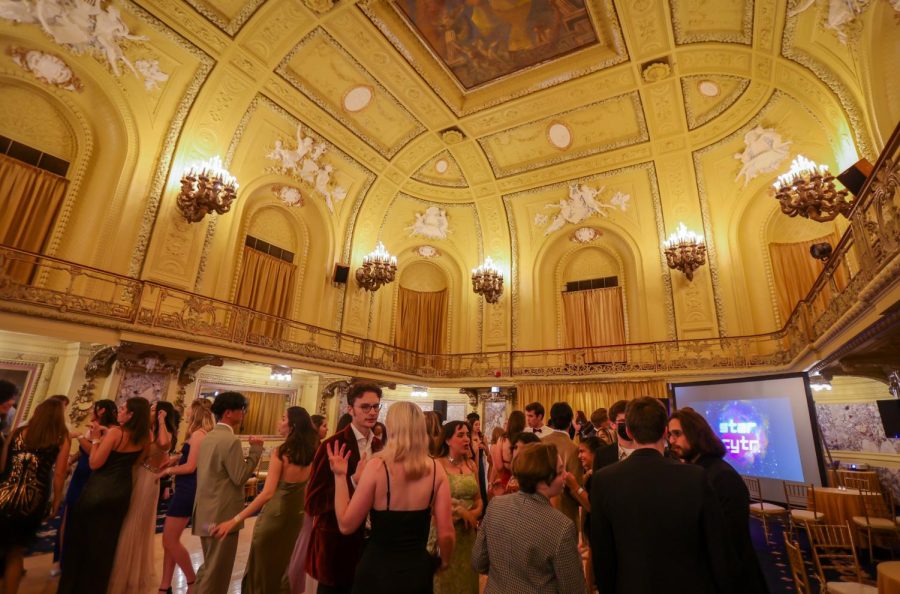 Attendees of the sophomore prom on the dance floor of the Congress Plaza Hotel.

Students who graduated high school in 2020 faced many disappointments during their senior spring due to the COVID-19 pandemic. They missed out on classic high school celebrations and had to enter college during online school.

On Saturday, however, Northwestern students had a chance to make up one of those traditions by attending the second year prom, hosted by the Wildcat Welcome Back Planning Committee. All sophomores and first-year gap-year students were eligible to reserve a free ticket for the Great Gatsby themed prom on Saturday. A planning team of staff and students organized the event, which took place at the Congress Plaza Hotel in downtown Chicago.

Weinberg sophomore Vik Nandigama said he was disappointed when his senior prom was canceled in 2020.

“It was honestly a buildup of things,” he said. “School got canceled, and then it became online and prom got canceled, too. (It) just honestly sucked a lot.”

It was meaningful for NU students to experience prom, many for the first time, he added.

Nandigama embraced the concept of sophomore prom and organized a promposal with his friend. At the South Asian Students Alliance formal hosted Friday, he and his friend presented signs to their dates that read, “Must Be This Tall to Say No.” Their dates answered ‘yes’ while the crowd of students at the formal cheered, he said.

“My date in high school is the same date I went to college prom with, so it was a full circle experience,” Nandigama said.

When McCormick sophomore Ria D’Souza found out her senior prom was canceled, she didn’t believe she would have another opportunity to wear her prom dress. She said she appreciated that the school gave students this opportunity.

D’Souza said the event felt, in part, more similar to a school dance than a prom because she considers prom a celebration of the end of high school.

“It’s one of the last things you can do as a senior with all of your friends,” D’Souza said.

The parts of prom that NU couldn’t make up for, however, did not stop D’Souza from enjoying the night. According to D’Souza, the venue was “gorgeous” and everyone seemed to be having fun.

The best part of the prom, she added, was seeing everyone dressed up taking pictures in formal outfits.

Prior to the prom, organizers also scheduled a whole week of programming centered around the sophomore class.

On “Lazy Monday,” students were encouraged to wear pajamas and paint The Rock, along with visiting the The Fat Shallot food truck parked nearby with free lunch. Later in the day, “Spider-Man: No Way Home” aired in Norris University Center’s McCormick Auditorium, and the Allison, Sargent and Elder dining halls served breakfast for dinner.

On “Spirit Tuesday,” students showed their school pride by wearing NU merch. One student won AirPods in a giveaway after posting a picture of themself with spirit week specific hashtags.

The festivities continued on “Way Back Wednesday,” in which each residential area of campus dressed in the fashion of a different decade. Organizers also screened “Back to the Future” in McCormick Auditorium that night.

Many attendees were not able to participate in these high school-esque activities like spirit week during their senior year of high school. Communication sophomore Zai Dawodu said she was excited to be able to share a prom with people who had similar experiences as her.

“I feel like it was almost a little bit of closure from high school,” Dawodu said. “It was fun to do it with my college friends.”

— Queer Prom! invites students to celebrate their identities and mingle in Norris

—Patel: How to pick a formal date