The Daily Northwestern • May 16, 2022 • https://dailynorthwestern.com/2022/05/16/ae/mayfest-hosts-battle-of-the-artists-provides-platforms-to-student-performers/ 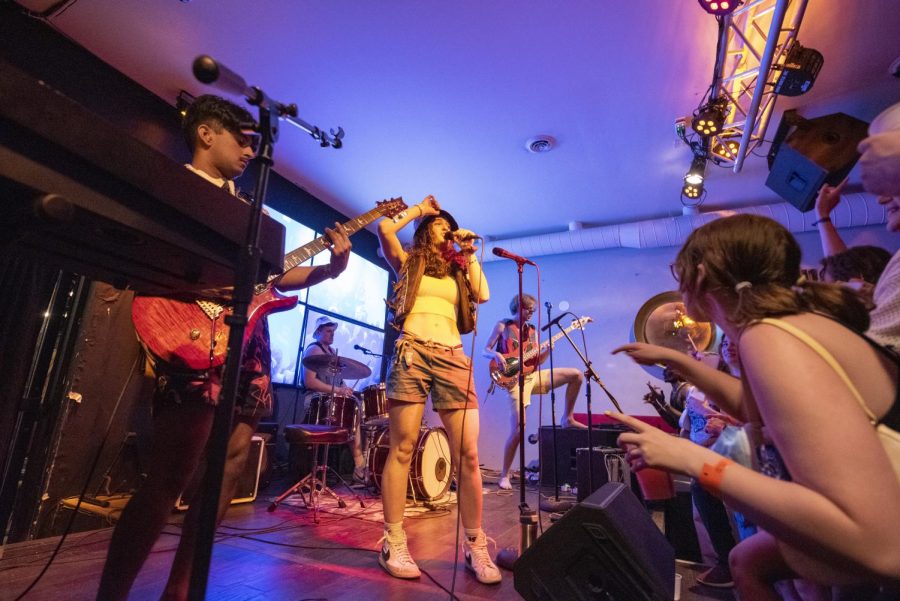 Student performers and bands competed at Mayfest’s Battle of the Artists for a chance to perform at the 50th anniversary of Dillo Day.

Communication freshman and rapper Ciel McDaniels performed live for the first time in elementary school. This week, he will take to a much larger stage with a set at Dillo Day.

“I love just seeing people’s smiles, and if I can make that many people have those smiles, that’d be awesome,” McDaniels said of performing at Dillo.

On April 28 and May 12, Mayfest Productions hosted Battle of the Artists at Good To Go Jamaican Cuisine & Event Space. Night 1 winners Ciel and Moondog and Night 2 winner Poor Man’s Yacht Club will perform on the Dillo Day mainstage.

According to Weinberg junior Sabrina Scheinberg, co-director of Mayfest programming, this was the first year Battles was not split into bands and DJs, but rather into solo versus group performances. Scheinberg said this allowed a wider range of performers, including rappers, to try for a spot on the Dillo stage.

“​​Even if they don’t end up performing on the Dillo stage, it’s just a great opportunity to get their name out there to get some performing experience because it’s pretty hard to get that elsewhere,” she said.

Scheinberg said McDaniels definitely stood out at the first night of Battles, which she emceed. The newcomer’s lyricism and ability to engage the crowd surprised her, she said.

The performance at Good to Go was McDaniels’ first venue performance, having primarily performed at parties in the past. He said he was impressed with the way Mayfest put together the event.

“The crowd was lit,” McDaniels said. “I would say that would be my best performance (to date).”

After receiving requests from an open call for artists through social media, the programming committee had a listening party where it decided who would perform at Battles. With more than 30 applicants, Scheinberg said it was difficult to choose the 11 who would eventually grace the stage for about 300 to 400 people at Good to Go.

Weinberg junior Lu Poteshman, who goes by DJ Lu when she performs, said her experience at Battles was unique compared to other performances she’s done in the past. Performing at a venue felt different than performing at a party, she said, and the 15-minute time slot was the shortest she’s done thus far.

“There definitely was increased pressure just recognizing that I was performing along with some really talented people,” Poteshman said. “I was really amazed by everyone that performed at Battle of the Artists and honored to share the stage with them.”

While bassist and SESP senior Brian Kaiser said the band’s sound has stayed relatively consistent throughout their time playing together, it was able to emphasize each member’s strengths at this year’s Battles.

“It felt like a chance to really show who we are as a band and show our maturity and our cohesiveness,” drummer and McCormick senior James Drake said.

The band played two originals and three covers, including “Happier Than Ever” by Billie Eilish and “Elephant” by Tame Impala.

The band said the judges, short set time and potential Dillo Day slot contributed to a sense of pressure going into Battles — a feeling that was so intense for Drake that he said he had trouble eating and sleeping in the days leading up to the event. Nonetheless, PMYC came out on top, beating the four other groups that night.

“It’s Dillo Day. I never actually conceptualized it. I never thought it would be something I would do,” guitarist and Weinberg senior Vikram Manikantan said. “Now I’m struggling to put into words the reality that we’re actually about to do it.”

Battles are judged on technicality, engagement with the crowd, Dillo Day applicability and some other qualitative judgements by a panel of judges. Scheinberg said Mayfest attempts to get a diverse panel of judges, pulling not only from Mayfest but also from A&O Productions and the .WAV Company.

This year’s Dillo Day marks the first in-person Mayfest festival since 2019, meaning many members are putting together a festival for the first time.

“It’s funny and nerve-wracking at the same time to constantly be doing events and putting out promotional materials and planning Dillo day itself when the majority of the people who are planning have never actually been a part of any of these things before,” Scheinberg said.

Despite the challenges, Scheinberg said it has been fun getting to create new traditions. She encouraged everyone to come see their classmates perform on Dillo Day because one never knows who might become famous.

PMYC said it looks forward to sharing the Dillo stage and reflecting on the last four years spent together as a band in front of the biggest audience for which it has ever performed.

“Even though we’re seniors, it doesn’t feel like the end for us,” Manikantan said. “To me, that’s one of the most exciting things.”