The Daily Northwestern • May 15, 2022 • https://dailynorthwestern.com/2022/05/15/ae/reel-thoughts-heartstopper-captures-the-importance-of-found-families-within-the-queer-experience/

Reel Thoughts: ‘Heartstopper’ captures the importance of found families within the queer experience 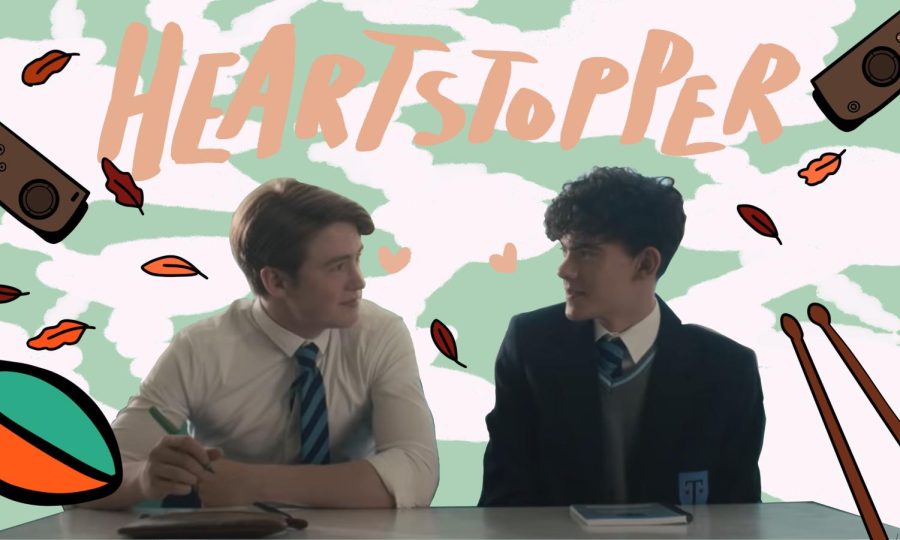 Nick Nelson and Charlie Spring look at each other. “Heartstopper” emphasizes the range of queer experiences and the importance of found families.

From the first minute of Netflix’s “Heartstopper,” the screen is saturated with blues and yellows, as scattered hand-drawn pastel leaves and flowers whirling across the screen. It’s clear early on the show doesn’t take itself too seriously — and it wants to place joy at the forefront of the viewer’s experience.

Adapted from a webcomic of the same name, the show follows Charlie Spring (Joe Locke) throughout Year 10 at Truham Grammar School for Boys. He’s the only openly gay student at his school, but the cast expands to include a wide range of LGBTQ characters, all on their own emotional journeys.

In many movies and shows highlighting queer stories, especially those aimed at a broad audience, the non-cis-het character is an outlier in their friend group, isolated as the token gay friend. If you’ve ever met a group of LGBTQ friends in person, you know this is far from the truth. This experience is something “Heartstopper” gets right. (Shoutout to Tao, the series’s token straight friend, and Imogen, a self-proclaimed “ally”).

While “Heartstopper” does feature a cis gay male couple, it also showcases the experiences of queer women and queer people of color.

The show also brings together a broad cast of characters who are all in different places in their emotional journeys as they each grapple with their own unique identities. In doing so, it charts a variety of queer journeys, so audience members can see themselves in a multitude of characters.

Charlie begins to value himself in his relationships after having been outed the previous year. Charlie’s love interest Nick Nelson (Kit Connor) comes to terms with his bisexuality through the oft-used but still widely experienced “Am I gay?” Google search (and a classic bisexual crisis driven by “Pirates of the Caribbean”).

Tara Jones (Corinna Brown) and Darcy Olsson (Kizzy Edgell) struggle with lesbophobic peers after coming out as a couple on Instagram, and Tara grapples with her relationship to the word “lesbian.” Elle (Yasmin Finney) navigates moving to a new school after coming out as transgender at an all-boys school, looking to gain footing in her identity and her new community. In all these situations, the show’s queer characters gravitate toward each other, finding common ground, safety and comfort in their shared experiences.

That sense of support also helps the characters accept themselves as they explore new parts of their identities. Seeing a happy queer couple — Tara and Darcy — helps Nick begin to see the possibility of happiness with Charlie. This scene comes soon after he starts to fear the potential implications of his identity, researching issues facing the LGBTQ community like marriage legalization and hate crimes.

The world of “Heartstopper” isn’t purely innocent and joyful. The characters face bullying and isolation, struggle with their mental health and navigate familial dynamics. Despite these challenges, the characters are still able to come together and find happiness in their identities and relationships (and they do so amid a stellar soundtrack featuring the kinds of music queer people actually listen to).

In many instances, the queer experience can be an isolating one. From struggling to come out to family members (or themself) to existing as the only openly queer person in a community or navigating what a healthy relationship might look like, those holding queer identities sometimes struggle to find the support they need.

Often, emotional support comes from members of the queer community — but that dynamic is not frequently portrayed on screen. Especially during high school, when everyone is trying to find themselves, it’s essential to see that community is possible.

Together with your found family, you can find joy. In “Heartstopper,” viewers see just that, proving to queer teens that community — and happiness — are attainable.

— Cabral: On “Heartstopper” and queer joy

— Reel Thoughts: ‘Doctor Strange in the Multiverse of Madness’ is campy fun, but also underwhelming