The Daily Northwestern • May 13, 2022 • https://dailynorthwestern.com/2022/05/13/sports/lacrosse-no-6-northwestern-enters-ncaa-tournament-off-two-straight-losses/ 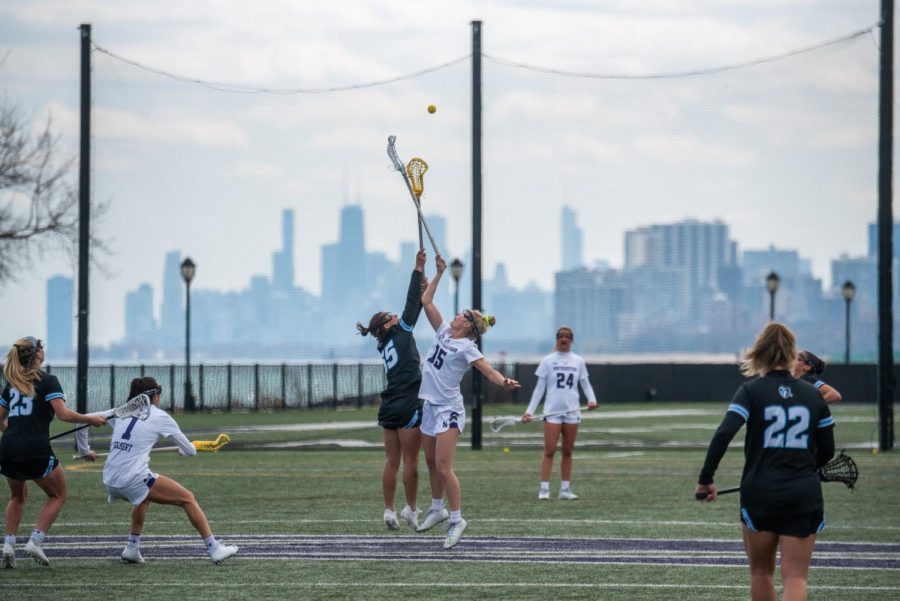 Graduate student Jill Girardi jumps and reaches for the ball in a faceoff. Girardi had three goals and six draw controls in the loss against UNC.

For the first time since 2018, Northwestern entered the NCAA Selection Show coming off two straight losses.

Coach Kelly Amonte Hiller said the Wildcats were “pretty down” over the weekend after the two straight losses and an early exit from the Big Ten Tournament. But after a rigorous regular season schedule, she said the Wildcats were hopeful they would still manage the No. 4 seed -– and thankful when it all went to plan.

“We felt there was a high likelihood that we would get that four-seed,” Amonte Hiller said. “But you never want to take things for granted and you never can tell. Our girls were very grateful to have that opportunity.”

Now, the Wildcats turn to their 18th consecutive postseason. NU will face Central Michigan in Evanston on Friday. Should the Wildcats advance, they will take on the winner of Notre Dame and Michigan on Sunday.

NU hasn’t lost consecutive games frequently in recent seasons. The last time the Wildcats fell twice in a row was in 2019, when they played then-No. 3 North Carolina and then-No. 1 Boston College in back-to-back games.

Against Maryland and Rutgers, the Wildcats struggled to keep up all over the field. NU, who ranks third nationally in draw controls per game, went even on the draw with the Scarlet Knights. Defensively, the Wildcats recorded just three caused turnovers against the Terrapins. Graduate attacker Lauren Gilbert, NU’s leading scorer, was also quiet in both matchups, notching just one goal in both.

Amonte Hiller said the Wildcats haven’t specifically focused on any one skill set following the losses, saying there’s a general “onus” on the team to make individual improvements on both sides of the field.

The losses have also been a source of learning for NU, Amonte Hiller said, and the program has worked to channel this knowledge into tournament preparation.

“Sometimes losses are a great opportunity to reevaluate,” Amonte Hiller said. “We’ve had two in a row, so it’s given us an opportunity to look within and work on some things we feel we need to improve to make that next jump.”

As NU prepares to take on Central Michigan on Friday, its fifth-years are also readying for their last go-round. Graduates Gilbert, midfielder Jill Girardi, defender Ally Palermo and midfielder Brennan Dwyer have each made a significant impact on the field for the Wildcats this season.

Amonte Hiller said the group brings a “fight” to the team, and members are excited to toe the line in their final postseason.

This will also be NU’s first postseason without attacker Izzy Scane since 2018. Scane, the Wildcats’ leading scorer in 2021, played a pivotal role in powering her team to two consecutive NCAA semifinals. She’s been providing pointers and helping from the sideline, but won’t return to the field until next season.

Earning the No. 4 seed also guaranteed hosting rights for the Wildcats, who will face Central Michigan at Martin Stadium. That alone is helpful in a tournament environment, Amonte Hiller said.

“It’s a huge advantage,” Amonte Hiller said. “It’s a great place to play, and we’ll have the beautiful weather (too).”