The Daily Northwestern • May 12, 2022 • https://dailynorthwestern.com/2022/05/12/city/art-can-be-around-you-a-deeper-look-at-evanston-sculptures-history-and-messages/

‘Art can be around you’: A deeper look at Evanston sculptures’ history and messages 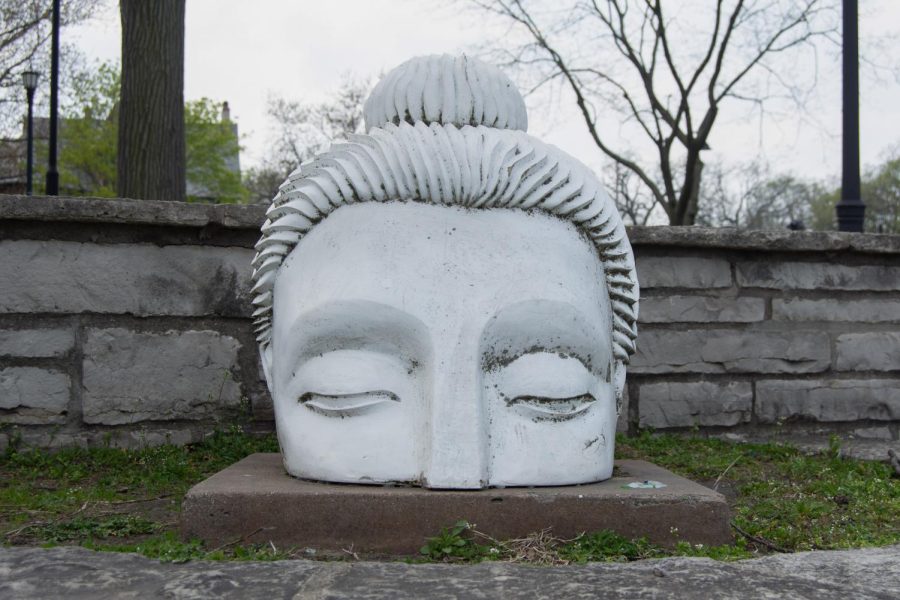 In Dawes Park, a Buddha head sculpture emerges from the ground. To creator Indira Freitas Johnson the piece is meant to exude a sense of beauty and peacefulness that can be enjoyed by passersby.  Part of a larger Chicago public art program, Johnson said “Ten Thousand Ripples” has positively affected community residents’ experiences.

“One of the things we wanted was to engage people in art that’s right in their neighborhoods,” Johnson said. “You don’t have to go to a museum or to a gallery to see the art — art can be around you.”

The emerging Buddha is far from the only work of public art in Evanston. Sculptures created by various artists are scattered among city blocks for the general public to enjoy, while also sharing meaningful messages. These pieces can be found on Evanston’s recently updated public art interactive map.

“The city feeds the soul and nourishes the spirit of the community,” Evanston Arts Council Chair Toby Sachs said. “Public art, whether it’s sculpture or murals, is one of the most tangible ways that art can come into the community.”

Sachs said the city’s funding for public art is collected from three main sources: taxes, individual donors and an ordinance that denotes up to 1% of the overall construction cost of each public building toward art.

Another such art piece in Raymond Park is “Conversations; Here and Now,” which Johnson also created. This piece, she said, aims to cultivate peace and individual action and engage people in the public art installation process.

“Conversations; Here and Now” is a circle of seven uniquely designed chairs with an empty space in the middle. Johnson said her wish is to have people of various backgrounds sit and interact, filling the empty space.

“I feel like all public art needs to have (engagement),” Johnson said. “So each of the chairs represents something, and then whoever sits in them then has a voice in talking.”

Elsewhere in the city, Elliott Park is home to “Attached,” a piece by Evanston artist Janet Austin. “Attached” depicts a metal wasp perched upon a welded, ovular vessel. Austin said “Story Vases,” a series of beaded vases telling the story of five African women, inspired the shape of her sculpture.

“The wasp is a perfect example of something that’s really targeted,” Austin said. “I think even the smallest things are potential for life on Earth. You get rid of any one of them, you could crash maybe a whole ecosystem, or at least make it less functioning.”

At the base of the installation, there is a poem by Austin that includes a paraphrase from naturalist and conservationist John Muir:  “I pollinate / I build nests fit for a queen / I consume swarms of parasitic pests / Call me hornet, wasp, / Yellow jacket, vespa / We coexist / When one tugs at a single thing in nature, / he finds it attached to the rest of the universe.”

Pedestrians on Sherman Avenue may also run into some of Evanston’s public art exhibitions. Chicago artist Anna Soltys designed “Amalga,” a white form partially covered in mosaics, which changes appearance depending on one’s perspective. It now sits outside the Albion apartment building.

“Amalga” comes from the word amalgamation, meaning the process of combining or uniting things together, or the result of doing so. Soltys said she enjoys researching bizarre words. Sometimes, she said, she spends months diving down a rabbit hole of words before she finds the right one for an art piece.

Soltys said she never knows what she’ll create when she first sits down. Instead, she said she lets her subconscious take over, and the finished product either makes sense or it doesn’t. In this case, Soltys said “Amalga” made sense because it demonstrated the idea of connection.

“In all of my work, I really like to explore the internal psychological struggles that we all deal with and really think of the things that connect us,” Soltys said. “A lot of times, we connect a lot through mystery and pain and things that are very personal because then we realize that we’re not alone.”