The Daily Northwestern • May 12, 2022 • https://dailynorthwestern.com/2022/05/12/campus/new-york-times-journalists-speak-about-their-book-on-jan-6-insurrection-and-trump/

New York Times journalists speak about their book on Jan. 6 insurrection and Trump 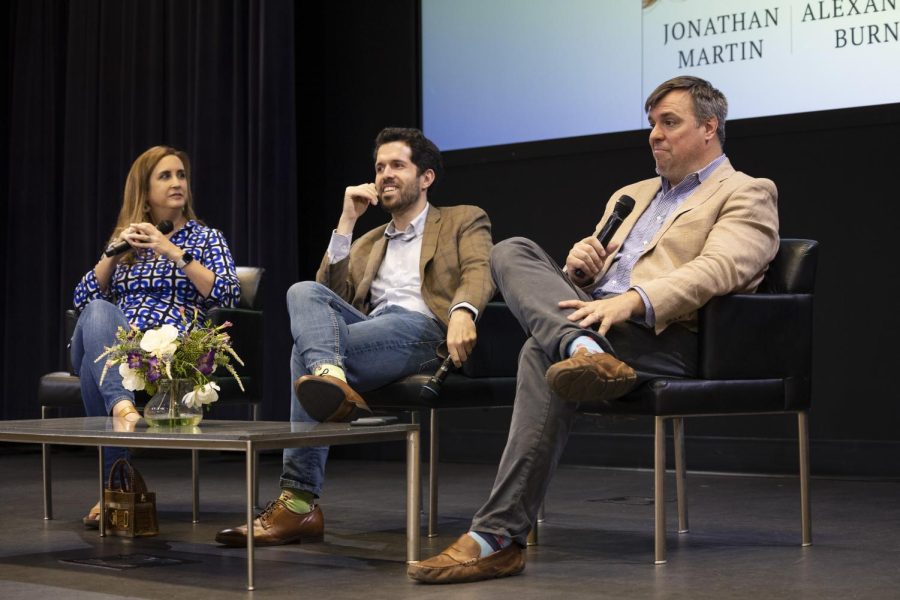 From left to right: Betsy Martin, Alex Burns and Jonathan Martin. The speakers discussed democracy and the future of American politics at a Thursday event.

The New York Times journalists Alex Burns and Jonathan Martin discussed the reporting process behind their book “This Will Not Pass,” which covers the deep fissures in both major political parties, at a Thursday event.

Burns said the pair approached writing the novel with the sentiment that the U.S. political system does not work for the country in this day and age. Since 2000, he said many tragedies like 9/11 and the COVID-19 pandemic have proven the government’s inadequacy.

“​​In none of those situations can you point to the results that Americans got from their government and say, ‘What a great performance by a world-class operation that we’ve got here in this country,’” Burns said. “What we felt going into this was that we needed to capture this.”

Jonathan Martin discussed the implications of covering an administration that never conceded the 2020 presidential election. He and Burns could not “tie a bow” around the campaign book, he said, as Trump’s presidency culminated in the Jan. 6, 2021 insurrection.

In the early hours of Jan. 7, 2021, Jonathan Martin said he also spoke with Sen. Mitch McConnell (R-KY) and saw the Republican Party’s “optimism” in the insurrection’s aftermath.

“His demeanor was so fascinating because instead of being dejected or appalled, he was actually enthusiastic about this political opening,” Jonathan Martin said. “As he put it, ‘Trump had finally discredited himself. He put a gun to his head and he pulled the trigger.’”

The pair said they wrote the book such that different politicians could be happy with one section and less pleased with the next one. Jonathan Martin said they had to keep fishing for bait to get Trump to open up about different topics.

One of Martin’s tactics involved chocolate cake. Trump often boasted about how he had shared “the most beautiful piece of chocolate cake” with Chinese President Xi Jinping, Jonathan Martin said, so he continued to fill conversations with the former president by talking about the dessert. By discussing more basic topics, he said he uncovered more information from Trump about his thoughts on matters like Georgia politics.

“He takes the bait on the chocolate cake and actually, now he’s going off on Brian Kemp and David Perdue and Georgia and whatever. That stuff is valuable,” Jonathan Martin said. “It’s just a matter of keeping the clock running … and when it is running, and he’s not talking chocolate cake, he’s saying some pretty dark stuff.”

Apart from chocolate cake, Burns said another piece of bait was to talk to politicians about their families. Betsy Martin said this was one of the more amusing strategies that Burns employed.

“Alex’s tactics to extend the interview was to ask Trump if he had any parenting advice,” Betsy Martin said.

The panel concluded with some audience questions. One member asked what the two thought about the future of the country after their reporting.

“When you look at what the country has been through in the past, it’s really, really hard for me to look at the experience in the last few years and think there’s no coming back from this,” Burns said. “It is definitely not the worst we’ve ever had. It’s just pretty bad.”

— Northwestern Political Union votes that American patriotism is not good

— NU announces it will continue doing business with Uline