The Daily Northwestern • May 11, 2022 • https://dailynorthwestern.com/2022/05/11/sports/softball-northwestern-dominates-all-conference-honors-receives-three-of-four-individual-awards/ 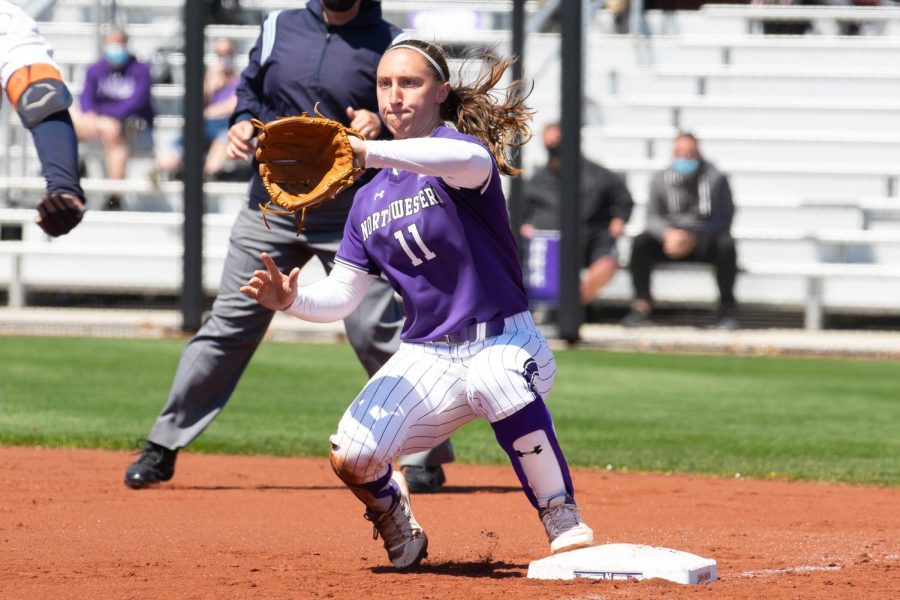 For the fourth time in her career, coach Kate Drohan earned Coach of the Year honors. The 20-year-veteran has won the award more than any other coach except Michigan’s Carol Hutchins. Drohan led the Wildcats (39-9, 19-4 Big Ten) to their first regular season Big Ten title since 2008 this season.

Graduate right fielder Rachel Lewis was voted Player of the Year by the 14 head coaches in the Big Ten. Lewis tops the conference with 20 home runs and 50 runs batted in, and she is tied for second in the Big Ten with 22 stolen bases.

Senior Danielle Williams was a unanimous choice for Pitcher of the Year. Williams is also among 10 finalists for the national USA Softball Player of the Year award, and leads the Big Ten in a litany of categories, including wins, saves, strikeouts and earned run average.

Lewis and Williams were the only two unanimous selections to the first team All-Big Ten. Lewis earned the distinction, her fourth All-Conference selection in total, for the third time in her career. Williams has done so three times in four years, twice unanimously. There were no All-Conference awards in the pandemic-shortened 2020 season.

Joining Lewis and Williams on the first team All-Big Ten are senior catcher Jordyn Rudd, senior first baseman Nikki Cuchran and sophomore third baseman Hannah Cady — the five NU players are the most of any Big Ten team represented, and tie a program record. Rudd picked up her third career selection and claimed a place on the All-Defensive Team.

Cuchran and Cady were first-time honorees. The former is tied for second in the Big Ten with 48 runs batted in during the season, while the latter was named conference Player of the Week for her series performance against Iowa earlier this month.

Two seniors, shortstop Maeve Nelson and center fielder Skyler Shellmyer, took spots on the second team All-Big Ten. Nelson was responsible for a walk-off home run against then No. 3 UCLA, while Shellmyer, a first-team selection in 2021, has more hits than any other Cat this season.

Every starting infielder was recognized by the conference Wednesday, as freshman second baseman Grace Nieto was the lone NU player on the All-Freshman Team. Nieto has at least one hit in nine of her last 10 games. Senior outfielder Lauren Caldrone was chosen for the Cats’ Sportsmanship Award.

The honorees will take the field Thursday in a Big Ten Tournament quarterfinal against Wisconsin.