The Daily Northwestern • May 10, 2022 • https://dailynorthwestern.com/2022/05/10/city/evanston-residents-explore-storytelling-through-dungeons-and-dragons/ 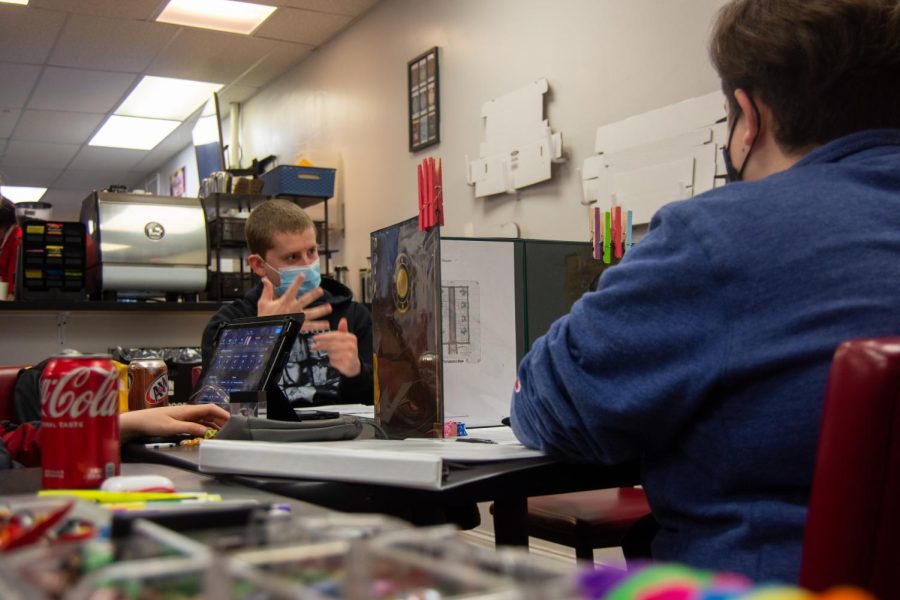 At Evanston Games and Cafe, participants play Dungeons and Dragons with drinks and snacks.

On Tuesdays, Library Assistant Morgan Patten leaves the real world for a few hours to become Chime, a charismatic kenku warlock. Chime is her character in Dungeons & Dragons, a fantasy role-playing tabletop game.

Across town, Evanston residents gather to play the beloved game in libraries, cafes and other community spaces.

First released in 1974, D&D has seen continued popularity through the years. In the game, players create their own characters and embark on fictional adventures by rolling dice. The Dungeon Master serves as the game’s referee, guiding the storyline.

“(D&D) is such a unique way to explore creatively. I love … the collective storytelling aspect of it,” Patten said. “It’s almost like watching a movie that you get to be part of in the moment, but there’s no pressure of being an actor.”

At the Evanston Public Library, Patten runs weekly D&D sessions for teens on Saturdays. As the Dungeon Master, Patten moderates the game.

Patten said D&D teaches young adults problem-solving and communication skills in an engaging way. They also explore ethical questions like how to conceptualize good and evil, she said.

“From a teen point of view, teenagers are at this point in their life where they’re trying to understand their own identity,” Patten said. “Every character they try, they’re almost exploring a different aspect of their personality.”

Through setting guidelines and creating premade adventures, the D&D Adventurers League provides a common framework for running games. Players can bring their characters to any D&D Adventurers League-affiliated location to play, according to Eli Klein, the owner of Evanston Games and Cafe.

Store employee Gavin Kramer manages the cafe during the D&D Adventurers League sessions. The players are usually young, but they run the games themselves, Kramer said.

In the cafe, players sit around tables with colorful dice and glossy D&D handbooks laid out in front of them. At each table, the Dungeon Master guides the game’s storyline behind a plastic wall, hiding their notes and dice rolls.

In one adventure, players combatted gnolls, a species of hyena-like humanoids with a taste for blood. When characters got trapped in a magical forest, players worked together to solve riddles and freed their characters from the enchantment.

“(D&D) gives a shared social outlet to people who otherwise might not have anything in common,” Klein said. “It becomes a much more close social experience.”

Hawke Young, who plays at Evanston Games and Cafe, said he loves to meet new people through the game.

“I read all the books, and they made it sound so amazing and cool,” Bodhi Young said.

Ultimately, Kramer said nothing compares to playing games together in person.

“I don’t think board games and tabletop games … are something that’s going to be truly replicated by technology,” Kramer said. “You can’t replace real-life human experiences.”

— Step inside the dungeon: Students talk Dungeons & Dragons at Northwestern