The Daily Northwestern • May 9, 2022 • https://dailynorthwestern.com/2022/05/09/opinion/griffith-the-world-cups-global-significance/ 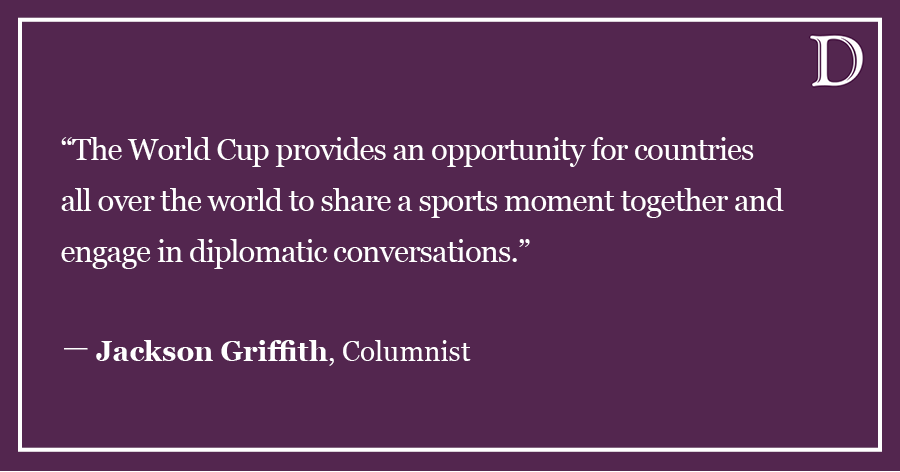 For the first time since 2014, the U.S. Men’s National Soccer Team clinched a spot in the FIFA World Cup. For many countries, very little eclipses the grandiose scale of the World Cup. Most participating countries stop everything to watch their countrymen compete. During the last World Cup in 2018, over 3.5 billion people viewed the tournament. More than 1 billion people viewed the Final between France and Croatia, ten times the amount of people who tuned into the Super Bowl that year.

With the U.S. being a huge underdog to win, with +10000 odds, I don’t expect anyone to be holding their breath for the U.S. to hoist the World Cup. However, it is a milestone for the program, and an opportunity for the U.S. to participate in the most celebrated athletic event in the world.

The U.S. Men’s National Soccer Team has yet to find much success at the World Cup, including a 40-year drought of failing to qualify, and only four tournament wins since the turn of the century. The U.S. team faces tough opponents this year, including England, Iran and either Wales, Ukraine or Scotland in the group stage. England finished 4th in 2018, and the last time the U.S. and England faced off in the 2010 World Cup, a controversial mistake by England goalkeeper Robert Green led to a 1-1 draw. The game drew 17 million viewers in the U.S., nearly a million more viewers than the first four games of the NBA Finals that year.

The World Cup provides an opportunity for countries all over the world to share a sports moment together and engage in diplomatic conversations. As FIFA stated in a press release in February, “Football can again be a vector for unity and peace amongst people.” With Russia being banned from participation, and Ukraine still aiming to qualify for a spot, there is an opportunity to see resiliency on display from Ukrainians on the field and solidarity from other competing nations.

Also on display is the nation of Qatar, who is hosting this year’s event. With millions expected to flock to the country, the pressure is on for Qatar to take measures to ensure a successful event, from security and health measures to logistical challenges like transportation and lodging.

Qatar has established that all those traveling to the World Cup must be fully vaccinated. In the 10 years since Qatar was awarded the bid, they have dedicated billions to creating infrastructure for the 2022 World Cup, including large stadiums, airports, hotels and public transportation systems. I believe Qatar, a small nation with significant economic and political influence in the region, possesses an exciting opportunity to catapult itself to a new chapter in its history.

The 2022 World Cup in Qatar could perhaps be the most viewed sports event in history, but it possesses something even more significant: an opportunity to display the unity and resiliency of the world, to highlight and reinforce diplomacy and to usher in the post-pandemic years. And of course, 32 teams will be competing to make their countrymen proud.

Jackson Griffith is a First-Year graduate student in the Master’s in Public Policy and Administration Program. He can be contacted at [email protected] If you would like to respond publicly to this op-ed, send a Letter to the Editor to [email protected] The views expressed in this piece do not necessarily reflect the views of all staff members of The Daily Northwestern.