The Daily Northwestern • May 9, 2022 • https://dailynorthwestern.com/2022/05/09/campus/native-american-and-indigenous-student-alliance-organizes-northwesterns-first-student-run-pow-wow/ 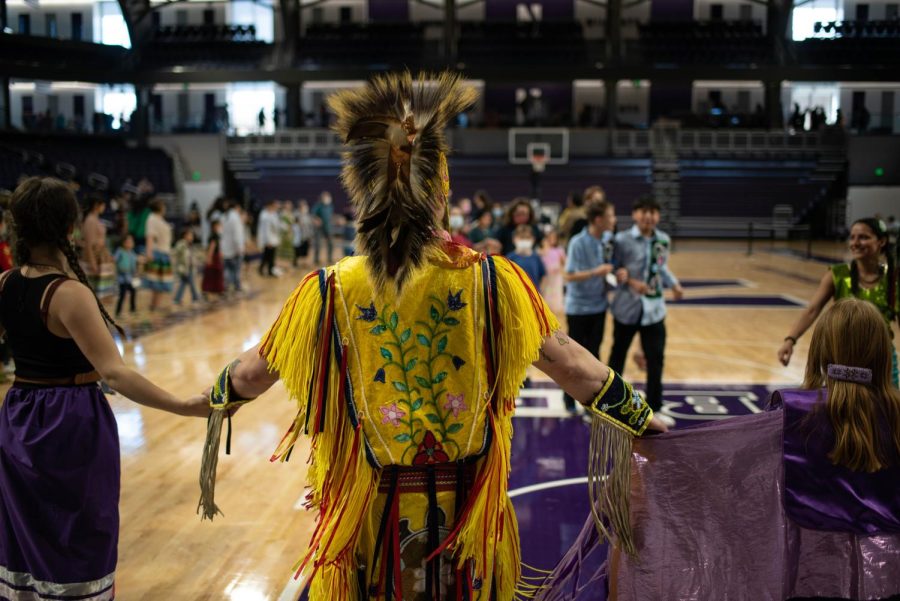 Four years ago, lumber from the Menominee Tribal Enterprises, a Native-owned and operated business, was used to build the Welsh-Ryan Arena basketball court. The Native American and Indigenous Student Alliance made history on that lumber on Saturday, hosting Northwestern’s first student-run Pow Wow.

A pow wow is a celebration held by many Native American and Indigenous communities where Native and non-Native people connect over dance, food and more.

More than 200 people attended the event, including Native and non-Native students, faculty, family, local residents and students from other universities. Marin “Mark” Denning, who is of the Oneida Tribe of Wisconsin, served as the emcee and Mark LaRoque, who is Ojibwe, acted as the event’s arena director.

Medill sophomore and former Daily op-ed contributor Kadin Mills, who is Keweenaw Bay Ojibwe and head of NAISA’s communications committee, said his younger sister, who is not Native, attended the event with him. Mills and his sister danced hand in hand to the beating of the drums from local groups like RedLine, Little Priest Singers and Indian Community School’s drum, the ICS Eagle Singers.

“Being … with so many of our professors and mentors and community members is really a wonderful experience, because this is the type of community that we … haven’t been in community (with) yet,” Mills said.

Many attendees wore their own regalia, which is clothing donned for Pow Wows and other special dances in Native culture. Regalia is often personalized with personal, familial and traditional items.

In light of the event’s proximity to Mother’s Day and the National Day of Awareness for Missing and Murdered Native Women and Girls, NAISA chose the theme “Honoring the Matriarchy,” according to a statement from NAISA’s communications committee.

Native and Indigenous women face disproportionately high rates of homicide and sex trafficking, data from the Association on American Indian Affairs shows. NAISA dedicated the pow wow to these missing and murdered women, as well as to the women in their lives, the group said in a statement to The Daily.

“In Indigenous cultures across Turtle Island, women are revered as life givers,” the statement said. “We feel that it is only appropriate that we should dedicate our space to honoring those important figures in our lives.”

Generations of NAISA students gathered to say goodbye to Loew, who will leave NU next year. CNAIR and Native faculty honored Loew with a purple and red eagle feather.

Adrian Cornelius, a member of the Oneida Nation in Wisconsin, traveled to NAISA’s Pow Wow after seeing it advertised on Facebook. His regalia featured designs with turtles and trees, representing his affiliation with the Turtle Clan and Oneida respectively.

Cornelius joined other attendees in the grass dance, one of the special dance categories featured in the latter half of the pow wow. Lead Dancer Josee Starr led the Jingle Dress Dance, a prayer and medicine dance meant to heal afflicted people.

At the time of the pow wow, Cornelius said he had been experiencing family difficulties. He said coming to the pow wow was an opportunity to pray for change in his own life and that of those around him.

“I have a lot on my mind, and I was taught that when we pray, we have our feathers and we have this (dance) circle,” Cornelius said. “Our feathers gather (our prayers) and they send that up to the Creator through the drum while the drum is playing.”

Gathering with other Natives felt special for SESP junior and NAISA co-Chair Isabella Twocrow, who is Oglala Lakota and a member of the Ho-Chunk Nation. Twocrow said she was able to speak to other Natives in Lakota, and gave a welcome in her own language.

Twocrow said one of her favorite parts of the event was the NAISA dance, where generations of NAISA students came together on the court. Twocrow said she saw alumni who she recognized from her first year at NU, when there were only three or four members in the group.

SESP freshman and NAISA Historian Athena GoingSnake, who is Muscogee Creek and a member of the Cherokee Nation, said experiences like the anti-Indigenous vandalism at The Rock in November have been difficult to face in her first year on campus. To GoingSnake, Saturday’s Pow Wow was an example of NAISA’s resiliency.

“Throwing this Pow Wow is showing us reclaiming our power from whatever we lost from The Rock,” GoingSnake said.

“In this moment, it’s really important to remember that we are not being defined by what somebody had to say back in November,” Mills said. “We’re defining ourselves now.”

— Not invisible: Students create solidarity and community in NAISA

— The Ripple: “No Wiindigo economy”: Student activism and the fight for fossil fuel divestment