The Daily Northwestern • May 8, 2022 • https://dailynorthwestern.com/2022/05/08/sports/mens-tennis-northwestern-sweeps-etsu-concludes-season-with-loss-against-no-8-kentucky/ 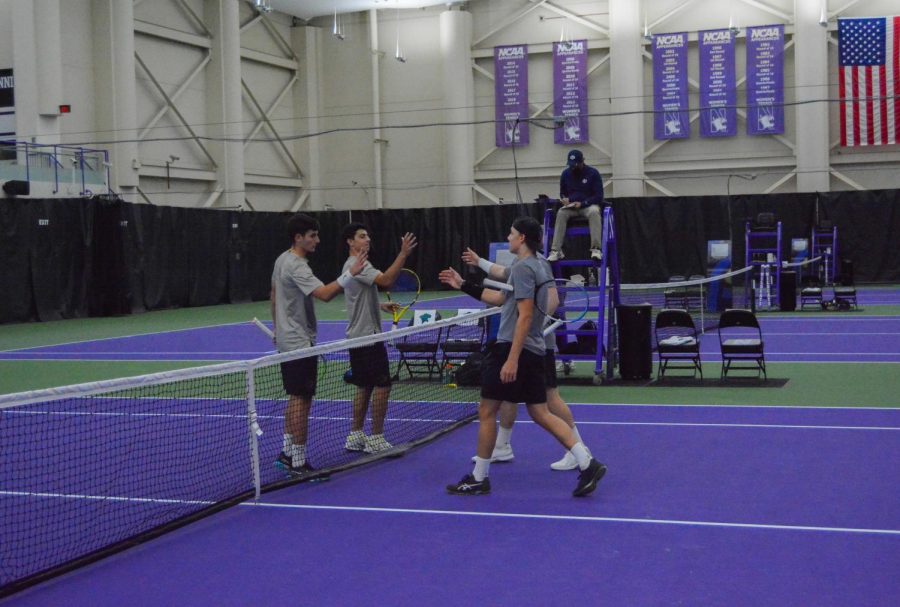 Felix Nordby and Trice Pickens shake hands with their opponents.

For the sixth time in the past decade, Northwestern’s postseason hopes ended the same way — one match short of a super regional in the NCAA Men’s Tennis Championship.

NU (20-11, 6-3 Big Ten) ended the season tantalizingly close to winning a regional for the first time under coach Arvid Swan, competing to the end against No. 8 Kentucky (23-7, 10-2 SEC). Despite the defeat, Swan said the season was a step in the right direction for the program.

“(When) we get on the court, we play hard, and we did that consistently over the course of the year,” Swan said. “We took a step towards that round of 16 with this group.”

The weekend began with an indoor clash against Southern League champions East Tennessee State (20-7, 7-0 Southern). All three doubles showdowns ended with 6-4 scorelines, and two of them tilted in NU’s favor.

In singles, NU put together one of its most comprehensive performances of the season. ETSU was unable to claim a single set as seniors Trice Pickens, Simen Bratholm and No. 42 Steven Forman secured the second, third and fourth points of the day on the top three courts. Sophomore Presley Thieneman was leading against his opponent when the match was cut short.

“That guy had a similar game to me, he made a lot of balls,” Thieneman said. “But I think I was a little more aggressive than him.”

Against Kentucky, doubles was again closely contested. NU relinquished an early lead on court three, eventually losing 6-4, and Kentucky’s Gabriel Diallo and Joshua Lapadat outdueled Bratholm and graduate student Brian Berdusco to clinch the opening point. The No. 82 duo of Forman and freshman Felix Nordby held a break lead against the No. 55 partnership of Millen Hurrion and Francois Musitelli, but the battle went unfinished.

NU tied the score in singles thanks to Forman, who upset No. 4 Liam Draxl. Forman served at a high percentage and utilized an arsenal of forehand winners en route to a 6-4, 7-6 (7-2) victory.

Following the match, Swan said Forman was “capable of beating anyone in college tennis.”

“All four courts going on were tight, so I really wanted to get that first point on the board,” Forman said. “Any time you play No. 1 singles against good teams, it’s going to be a tough match.”

Thieneman established a 2-1 lead for NU shortly after, breaking to win his first set against Musitelli and surviving a tiebreak in the second. After Musitelli overhit a routine shot at the net, Thieneman high-fived Swan before shaking hands with his opponent.

Thieneman finished the season with eight victories and no losses since March.

“I couldn’t believe he missed that shot, because it was a pretty easy forehand,” Thieneman said. “(I was) happy to see it go long.”

No. 113 Lapadat had little trouble against Nordby, triumphing 6-1, 6-1 to give Kentucky the overall match 4-2. Berdusco’s individual contest stopped at 5-5.

“We’re very close to making it, as evidenced by playing the overall No. 8 seed the way we did today,” Swan said. “We’ve got to keep knocking on the door.”

Swan said consistently making the super regional round remained a program goal, and Sunday’s performance indicated that the goal was realistic.

Forman, who is returning for his fifth year of eligibility in 2023, was similarly encouraged by the level of play, especially compared to last year’s season-ending 4-0 loss against Texas.

“That’s all you can ask for,” Forman said. “Give yourself a chance, and we certainly had then, and just live with the results.”