The Daily Northwestern • May 6, 2022 • https://dailynorthwestern.com/2022/05/06/campus/how-a-slogan-painted-on-the-rock-reignited-campus-discussions-about-antisemitism/ 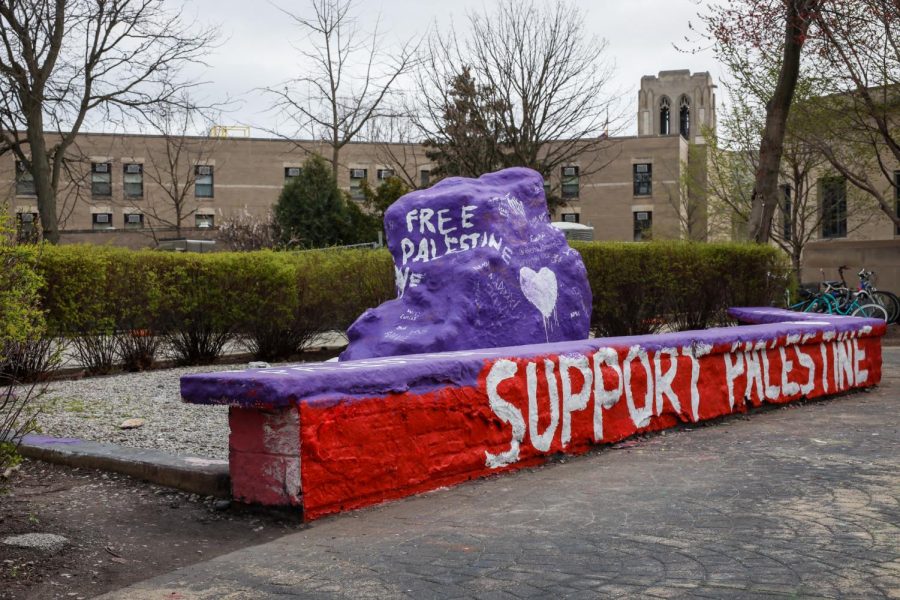 The slogan “from the River to the Sea” was painted over with black paint a few days after it first appeared.

After its April 23 vigil, Students for Justice in Palestine painted The Rock bright red with the phrase “Free Palestine” emblazoned in English and Arabic. Later in the week, a slogan reading “from the River to the Sea” appeared on The Rock.

While some activists said the slogan calls for Palestinian unity and liberation, others said it advocates for the erasure of an Israeli and Jewish state. And though SJP first painted The Rock, it is unclear which group painted on this slogan days after the vigil.

On social media, students discussed the multiple re-paintings of The Rock throughout the week — and whether its painting for an admitted students visit day was an attempt to cover SJP messaging.

The string of incidents in late April reignited familiar campus discussions: a debate over what connotes antisemitism and Zionism, whether anti-Zionism can blur with antisemitism and the role of The Rock as a platform for campus activists.

Some messages of Palestinian support covered up, taken down

Several emblems of Palestinian support across campus were painted over or taken down during the week of April 24.

Northwestern tour guides painted The Rock purple the day after the vigil in a pre-planned event for Wildcat Days, according to University spokesperson Jon Yates. While the purple paint covered most of SJP’s messaging, the tour guides left a “Support Palestine” slogan.

Yates said this decision was intentional to preserve as much of the existing messaging on The Rock as possible.

After the tour guides’ Sunday painting, pictures posted to social media showed The Rock painted again with red handprints and the slogan reading “From the River to the Sea.”

An NU Dissenters organizer, who asked to remain anonymous for safety reasons, said the group was involved in these messages but did not lead the effort. The student added the anti-war group focused on dropping banners across campus to coincide with the April 24 Wildcat Day.

NU Dissenters mounted five banners across campus that morning, two of which read “Stop funding war on Palestine” and “From the River to the Sea.” The group put up the banners around 3 a.m. that morning, the organizer said, and all had been removed when a member of the group first checked around 11 a.m. later that day.

The full slogan, “From the river to the sea, Palestine will be free,” refers to Palestinian unity and liberation — and by some interpretations, the establishment of Palestinian rule — from the Jordan River to the Mediterranean Sea. By April 27, this slogan had been painted over, though messages reading “Free Palestine” and “Support Palestine” remained.

Wildcats for Israel released a statement regarding The Rock on April 25, expressing “continued sadness and frustration” over recent violence in the region and condemning the painting of the slogan.

“This rallying cry not only denies the Jewish right to self-determination, but also endorses the physical destruction of Israel,” the statement said. “This trope has been embraced by Hamas, an antisemitic terrorist organization that aims to militarily wipe out Israel, all of its citizens and Jews across the world.”

While the statement attributed the painting of this slogan to SJP and condemned the group, it is unclear whether SJP was formally involved in its painting.

A Wildcats for Israel executive board member, who asked to remain anonymous for privacy reasons, said the group was not responsible for painting over the slogan.

“I personally don’t have an issue with Palestinian support and with groups who offer their support to Palestine,” the student said. “But when you use language like that, that has very severe antisemitic implications. It’s very offensive and makes me feel very uncomfortable.”

While some interpret it as a rallying cry for those living under occupation, Simon said others see it as calling for the land to be rid of Jewish people.

“I heard from students saying when they walked by The Rock, and they saw that slogan … it brought up that feeling that it was really not just a general call for freedom, but really an attack on Israel,” Simon said.

Activists discuss concerns over the slogan

An account of these events also appeared in an anonymous submission to the “Jewish on Campus” Instagram page, which has more than 37,000 followers. Along with the slogan on The Rock, the submission mentioned a NU Dissenters banner reading “NU has blood on their hands.”

The Dissenters organizer said they believe reactions to the slogan have conflated anti-Zionism with antisemitism. “From the River to the Sea” calls for an end to violence and a return to ancestral homelands, the student said.

“Why are people saying that this call is genocidal when right now in occupied Palestine, Palestinian people do not have enough water, they’re being surveilled and policed?” the student said.

An SJP member, who asked to remain anonymous for safety reasons, said they see the slogan as a call of unity for Palestinians. The student said they take the concerns about antisemitism seriously, but believe the slogan ultimately advocates for the liberation of Palestinian people — which they said should not be conflated with the erasure of Jewish presence.

The SJP member said they felt campus reactions to the slogan neglected the larger goal behind SJP’s vigil and organizing: centering Palestinian human rights. They said the slogan is meant to advocate against an oppressive system, not the Jewish people.

“It is a slippery slope fallacy when others take a reduced understanding of our view, and then frame us as antisemitic people who do not want Jewish people coexisting with Palestinians,” the student said. “It is ultimately not a productive conversation to have.”

Simon said although Hillel does not speak for the entire Jewish population on campus, it hopes to allow for nuance in these discussions. He and other Hillel members have attended previous SJP vigils to understand these perspectives, he said.

The organization hosted programming leading up to Israeli Independence Day Thursday. On Friday, Hillel plans to host an open forum for students to voice their reactions to the slogan and paintings of The Rock, Simon added.

“The reality is there are Israelis, Jews, Palestinians who are Israeli citizens, there are Palestinians living within a small geographic area,” Simon said. “They have competing claims — they are often legitimate claims — and they need to figure out how to live together in a way that is going to end bloodshed, rather than call for more hatred.”