After 49 years in Evanston, D&D Finer Foods owner reflects on his journey 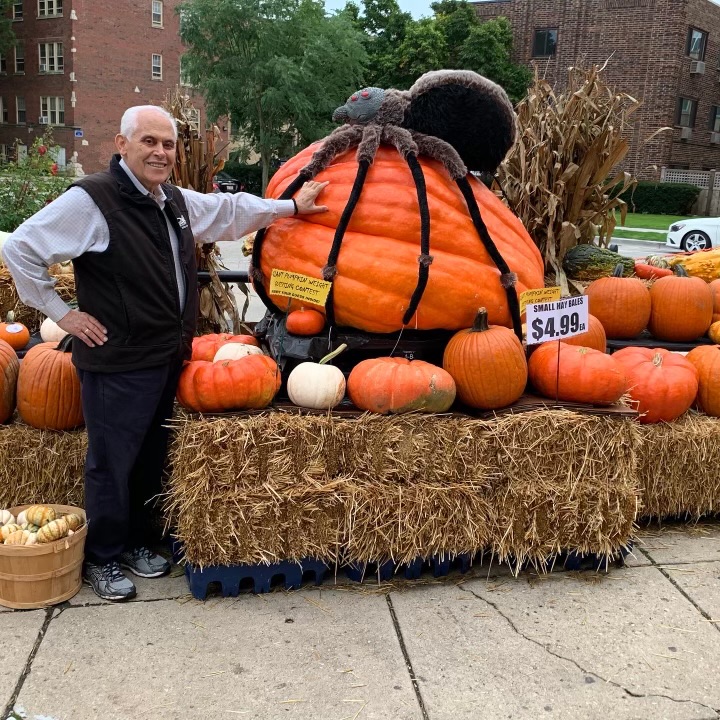 Thomas Douvikas, the owner of D&D Finer Foods, stands next to a pile of pumpkins. Douvikas immigrated to the U.S. from Greece in 1943 and has run the iconic Noyes Street grocery store since 1973.

When his uncle brought his family to Chicago after a 15-day journey from Greece in 1955, Thomas Douvikas, then 12, said he remembers his father starting his first job in America — washing dishes. Back home in Nestani, Greece, his father had been a shepherd and a farmer, assisted by his mother.

Many of Douvikas’s family members worked in Chicago-area restaurants at the time. But after seeing their struggles in the restaurant industry, Douvikas decided to follow the path of his uncle, Kosta, who owned a small grocery store in the city.

Douvikas, now 77, is the owner of D&D Finer Foods, a grocery store on Noyes Street currently in its 49th year serving Evanston residents. Customers and neighbors agreed that the store’s family-oriented atmosphere and commitment to building personal relationships keep them coming back.

During his first few years in the industry, Douvikas worked various jobs at grocery stores before landing a job as a manager at Happy Foods on Chicago’s North Side. In 1973, when he heard an Evanston store was for sale, he decided to purchase it.

Douvikas opened the store with his brother, Peter Douvikas. The brothers are the original “D&D” behind the store’s name.

Thomas Douvikas’s employees describe him as an old-school boss who puts boundless energy into his business. His son, Kosta Douvikas, now runs the store and said treating employees well is a cornerstone of his dad’s business.

“He taught me just to be humble and that as long as you can pay your employees and pay yourself at the end of the day, that’s all that matters,” Kosta Douvikas said.

Joyce and Robert Gettleman have lived down the street from D&D for 51 years. Joyce Gettleman, who said she visits the store about three times per week, said Thomas Douvikas always makes a point of developing strong relationships with his customers.

The Gettleman family grills a goose every New Year’s Eve, and D&D always keeps a fresh bird in stock specifically for them, Robert Gettleman said.

Joyce Gettleman said she used to send her kids to D&D to get groceries, knowing that employees were always looking out for her family’s needs.

“One time, I forgot to tell them (something I needed), and I actually called the store and had them tell my kids what I needed them to get,” she said. “My kids were a little embarrassed.”

Knowing that competition from White Hen could put his business at risk, Thomas and Peter Douvikas took out a loan to buy the property. His employees stuffed the store’s groceries into shopping carts and moved across the street.

When Peter Douvikas retired a decade ago, Kosta Douvikas took over as manager. Thomas Douvikas continued to work a few days each week, until recent health complications put a temporary stop to his shifts.

Kosta Douvikas said his father’s long hours at the store often came at the cost of attending his and his three brothers’ sports games and school events. Thomas and Peter Douvikas alternated hours, having days where one of them worked from 7 a.m. to closing at 8 p.m. and the other worked from 9 a.m. to 5 p.m.

“My dad is a guy who ate, slept and lived his store,” he said. “Even to this day, that’s still all he talks about.”

When he comes into the store, Thomas Douvikas often sits in the store’s back office, donning a black D&D vest. He occasionally peers over at video from the store’s security cameras on a large computer screen.

Kosta Douvikas said his father watches the same video from his home in Glenview and calls his son if he sees someone forgot to put a box away or close a refrigerator door.

“One of his lines that I teach everyone is ‘When there’s a will, there’s a way,’” said Jesus Rios, who oversees the store’s alcohol selection. “He trained me to be just like a little him.”

Thomas Douvikas traces his industriousness back to his early days in 1955, when his family boarded the ship to the United States.

“We made a good living here, better than back home,” he said. “(My family) didn’t come here for vacation. We came here to work hard.”

— “I’m doing my part:” the grocery store workers on the front lines of the pandemic