The Daily Northwestern • May 3, 2022 • https://dailynorthwestern.com/2022/05/03/campus/just-mercy-author-bryan-stevenson-delivers-one-book-one-northwestern-keynote/ 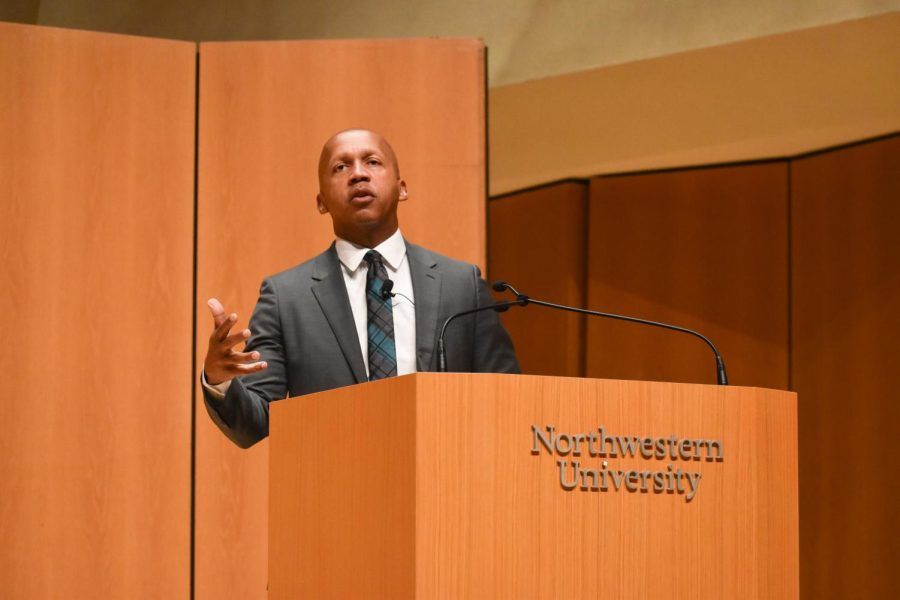 Bryan Stevenson is the author of “Just Mercy,” the 2020-21 One Book One Northwestern selection.

Author and lawyer Bryan Stevenson spoke about the criminal justice system and racial equity in the One Book One Northwestern keynote address Tuesday.

His speech was followed by a conversation with NU Prison Education Program Director and philosophy Prof. Jennifer Lackey.

“I don’t want to spend time talking about problems, I really want to use the time I have to talk about solutions,” Stevenson said. “There is a justice deficit in America. I want to talk about how we increase the justice quotient.”

Stevenson is the founder and director of the Equal Justice Initiative, an Alabama-based nonprofit that aims to provide legal representation to people who have been illegally convicted, unfairly sentenced or otherwise wronged by the criminal justice system. He has argued and won landmark Supreme Court cases on topics like mandatory life sentences for juveniles.

Stevenson’s 2014 memoir “Just Mercy,” which focused on his life and his work with the initiative, was a bestseller and inspired an eponymous movie adaptation in 2019.

The University chose Stevenson’s memoir as its 2020-21 One Book, offering programming throughout the academic year related to the book and its themes. However, his keynote address was postponed a year due to the COVID-19 pandemic.

“In every generation, there are one or two people who provide a moral vision of such clarity and force that they lead an entire people forward to a world that more fully realizes our aspirations for justice and truth and hope,” Lackey said. “In our own time, we are honored to have Bryan Stevenson among us.”

One Book Director Nancy Cunniff, who opened the event, said the program hosted more than 90 virtual events — including panel discussions, plays and intergenerational storytellings — despite the challenges of the pandemic. Still, she said, she was excited for the return to an in-person format.

The keynote speech for this year’s One Book selection, “The Story of More” by Hope Jahren, occurred virtually because Jahren lives in Norway and said she did not want to increase her carbon footprint by flying to Evanston.

“It just was amazing, the amount of programming that took place (in 2020-21), but none of us appreciated using Zoom,” Cunniff said. “We are truly grateful that Mr. Stevenson is here today to continue this conversation that we started last year.”

Stevenson said he was initially disillusioned as a student at Harvard Law School and transferred out. He returned to law, he said, after spending a month with a Georgia organization that provided legal services for people on death row.

Elected officials who enact excessively punitive legislation, Stevenson said, are often distant from the realities of the criminal justice system. He said one of the reasons the U.S. holds the highest incarceration rate in the world is because politicians promote narratives of fear and anger — which ultimately criminalize, rather than help, people who are struggling with issues like drug addiction or childhood trauma.

Stevenson emphasized the importance of being hopeful that justice will be achieved, even amid difficult times. He said hopeful people, from formerly incarcerated clients to his mother, have surrounded him his whole life.