The Daily Northwestern • May 1, 2022 • https://dailynorthwestern.com/2022/05/01/sports/mens-tennis-northwesterns-big-ten-tournament-run-ends-in-semifinals/ 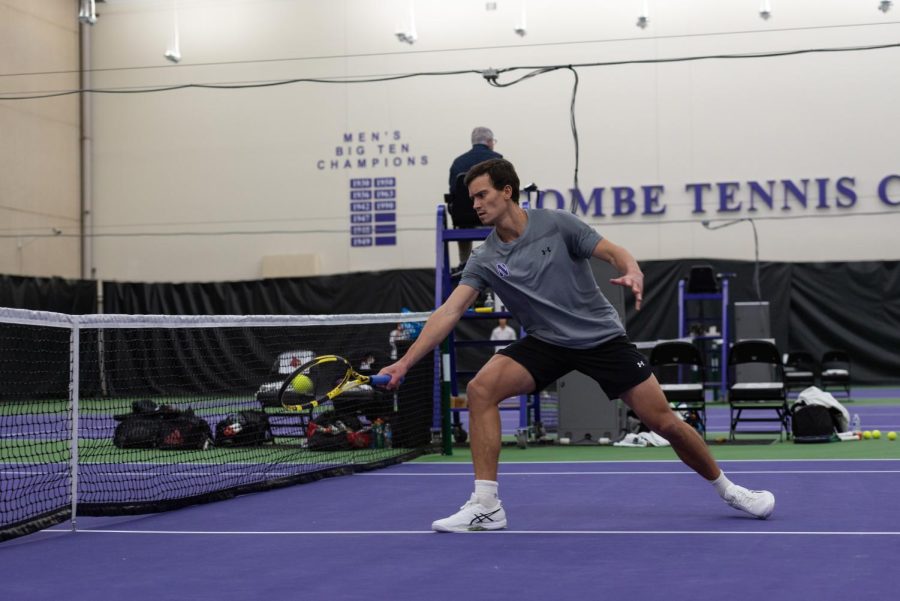 Graduate student Brian Berdusco volleys at the net. Berdusco was victorious in doubles against both opponents over the weekend.

It was a familiar result for Northwestern and coach Arvid Swan at the Big Ten Tournament — good, but not good enough.

“Ohio State played at a really high level,” Swan said. “That’s how they played throughout the year, and that’s why they’re ranked as high as they are.”

NU opened the weekend against the Cornhuskers in a rematch of an April 10 matchup in Lincoln, Nebraska. This time, the match was considerably more one-sided. The Cats dropped the doubles point in the teams’ first meeting, but this time, NU triumphed on courts two and three to take a 1-0 lead.

Swan said the team’s resilience was key, as the doubles point provided momentum for singles.

Swan decided to try the new singles lineup he experimented with last week against Indiana, shifting graduate student Brian Berdusco up to the fifth position and penciling in sophomore Gleb Blekher at the final spot. Berdusco and Blekher both won first sets, but neither finished their head-to-head.

Senior Steven Forman backed up his recent First Team All-Big Ten selection, dominating his contest against Dario Huber 6-0, 6-1. Forman, ranked No. 41 in the country in singles, served well throughout the day and made very few unforced errors.

“He’s such an energetic leader for us,” Swan said. “I think it was a good matchup for Steven, playing that player in the regular season.”

Two more seniors, Trice Pickens and Simen Bratholm, secured the match for the Cats after earning All-Conference honors Thursday. Pickens found multiple breaks early in his contest, and Bratholm rode the momentum from his first set tiebreak to cruise to individual victory, securing the 4-0 sweep.

Against Ohio State, doubles was much closer in the semifinals than during the teams’ regular season match when the Buckeyes won handily. Ohio State won 6-4 at No. 1, but Bratholm and Berdusco played well in key rallies at No. 2 and earned a 6-2 victory. On the final court, Pickens and freshman Felix Nordby played on serve until the very end, but the Buckeyes’ Cannon Kingsley and JJ Tracy won a deuce point to take it 7-5.

“Our doubles has developed to the point where we can play with anybody in the country,” Swan said. “I was pleased with the level in which we competed … in all three spots.”

Blekher fell quickly at No. 6 singles, doubling Ohio State’s lead. Forman could do little about No. 10 Kingsley on the top court, either, falling 6-3, 6-3. Berdusco held on for slightly longer than Forman, but eventually lost by the same score.

Pickens was the only Wildcat to claim a first set, playing against No. 21 Tracy, a familiar opponent. Tracy, undefeated on the year, was broken in the very first game of the set, and Pickens kept the pressure on for the rest of the way.

Swan praised the way Pickens countered one of the most electric players in college tennis.

“You have to play at such a high level against JJ,” Swan said. “(Trice) took risks when he should, (and) he was patient when he needed to be.”

Projected at 30th in the ITA rankings, NU will likely travel to a regional hosted by one of the top teams in the nation at the upcoming NCAA Men’s Tennis Championship.

Swan’s squad will learn its fate when the bracket is revealed Monday.

“The guys are excited for whoever we play,” Swan said. “We’ll be ready to go.”