The Daily Northwestern • May 1, 2022 • https://dailynorthwestern.com/2022/05/01/ae/block-museum-hosts-film-screenings-about-chicago-neighborhoods/ 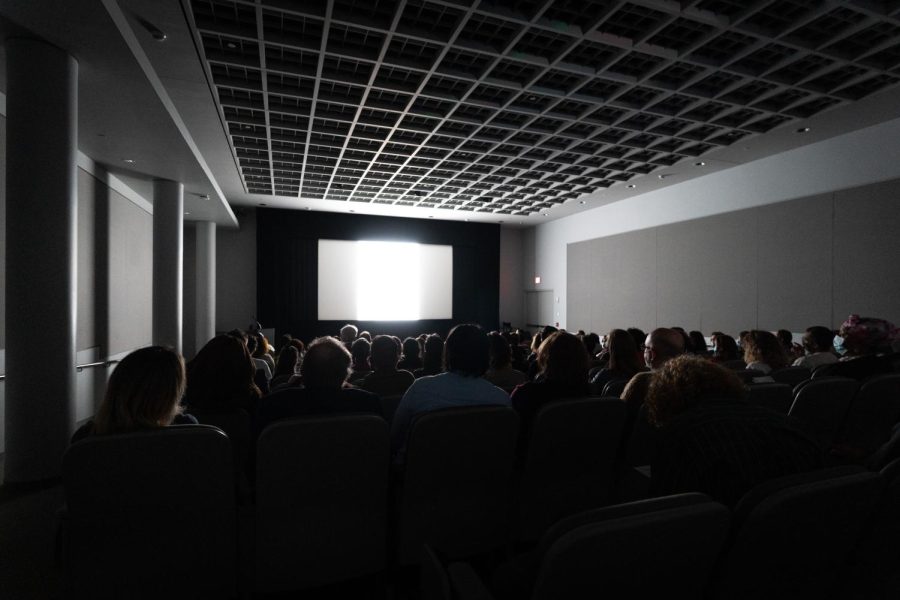 Audience watch a film in The Block Museum. The museum screened “Ma Belle, My Beauty” and featured a filmmaker Q&A at the Block Museum with Marion Hill Friday evening.

In her short film “Some Thingz Never Change: Monologues from a Stoop in Bronzeville,” artist Jazmine. set out to find a way for people to listen to others’ stories. In this case, the stories were those of her friends and family in the Chicago neighborhood Bronzeville, where she grew up.

Jazmine. was one of three filmmakers at the Block Museum on Friday evening for Block by Block: Short Films about Chicago. The museum screened five short documentary films about Chicago neighborhoods and issues like police presence, public school closures and community dynamics.

Jazmine.’s short film, which premiered in 2019 but is an ongoing project, features actors reading monologues on a three-step stoop. Their faces are intentionally never shown, nor are any identifying characteristics, Jazmine. said.

“Black bodies are always being studied and trying to be understood,” Jazmine. said. “How can you just listen to the people, and how can the people be very present and speak for themselves?”

Italian and comparative literature Prof. Domietta Torlasco and Indiana-based filmmaker Kristin Reeves joined Jazmine. for discussion after the film screening, with local artist Joyy Norris moderated the conversation. Michael Metzger, the Pick-Laudati curator of media arts at the Block, introduced the panelists and their films.

Torlasco’s film “Garfield Park, USA” chronicles life in that community and its relationship to crime. After she approached the Block with her film, Metzger compiled a collection of other thematically related works to create Block by Block.

All the films shown at Block by Block could be categorized as “hybrid-documentaries,” according to Metzger, as the filmmakers use a variety of documentary and artistic techniques to tell true stories.

“Filmmakers use techniques like interviews in wildly different ways and stand some of these conventions on their heads to invent new ways of responding to the communities that they’re documenting,” he said.

Metzger mentioned Reeves as an example of this practice because of her unique non-digital process. Reeves said she shot a portion of her project “CPS Closures & Delays” on 16mm film, which she manipulated with bleach and laser-etching to express the loss communities suffer from school closures.

Other parts of her film spontaneously took shape on site: The final product includes audio from impromptu conversations with passersby and clips where a group of children take over her digital camera.

“After I shot the film, I felt a sense of urgency,” Reeves said. “That’s when I went back through the video footage hoping that I captured some of those conversations that came up.”

Nostalgia and reflection are common themes throughout the films, Norris said. Jazmine. said her work was inspired by thoughts about how community influences memory and perspective.

“We’re all sitting in this room,” Jazmine. said during the panel, “ but how have you experienced the different videos because of our different backgrounds, or things in our interior lives that even our close friends will never truly understand?”