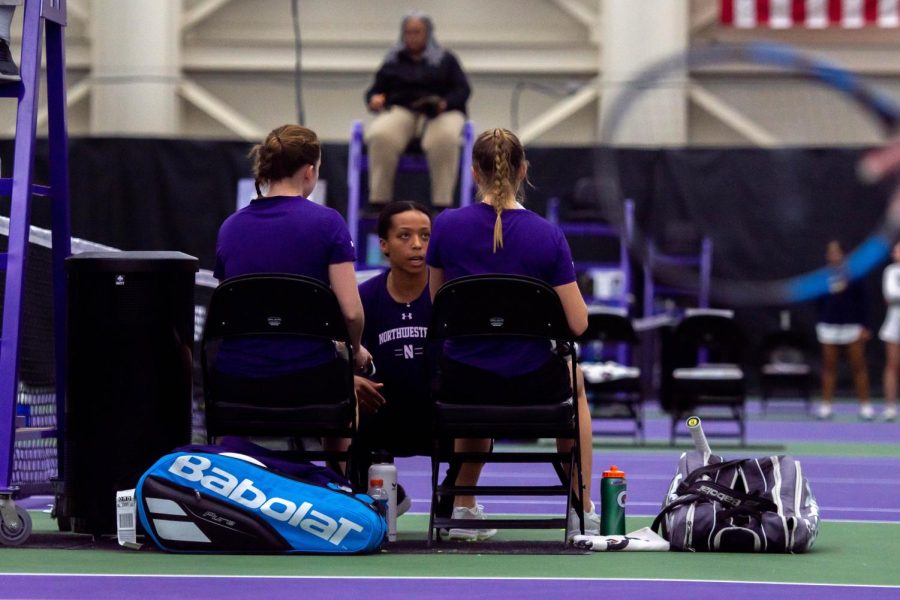 Senior Hannah McColgan and freshman Sydney Pratt sit during a match. McColgan and Pratt will look to continue Northwestern’s success in doubles play during the Big Ten Tournament.

While Northwestern’s regular season ended on a sour note following a 4-1 loss to No. 23 Michigan, the postseason provides an opportunity to press the reset button.

The Wildcats (13-8, 8-3 Big Ten) snagged the No. 3 seed in the Big Ten Tournament, clinching a double-bye and quarterfinals berth. NU will face the winner of Nebraska-Purdue on Friday at noon. While the Cats have not clashed with the Boilermakers this season, they did beat the Cornhuskers 4-1 earlier this month.

In the journey toward tournament play, NU’s spring results have been a bit of a rollercoaster. After introducing five new players in the fall, the dual season started off slow, with the Cats winning just one match in a four-game road trip.

But after reaching the top of the incline, momentum took hold, the nose of the coaster dipped down and NU picked up steam. From mid-February to early April, the Cats were firing on all cylinders, boasting a 10-2 record in that period. A quartet of 7-0 sweeps highlighted NU’s dominance during the stretch.

However, since their win against Iowa April 3, the Cats have sputtered. NU lost three of five to close the regular season, including a narrow 3-4 defeat to Illinois. Losses to top-25-ranked opponents in Ohio State and Michigan bookended the three week span.

Despite the close to conference play, the Cats continue to race out the gates against opponents. NU has won eight of its last nine doubles points. Senior Hannah McColgan and freshman Sydney Pratt have formed a dynamic partnership, notching a 5-1 record during the stretch.

On the singles card, senior Clarissa Hand remains the Cats’ lone ranked player in the latest Intercollegiate Tennis Association poll. Pratt and graduate student Ema Lazic have also cemented their place on the card, quickly becoming two of the most reliable and dominant players for coach Claire Pollard.

When the Cats’ tournament opener begins Friday, almost a week will have passed since the team’s loss to the Wolverines. It’s a brand new season and a chance for NU to add another championship to the banners hanging in Combe Tennis Center.