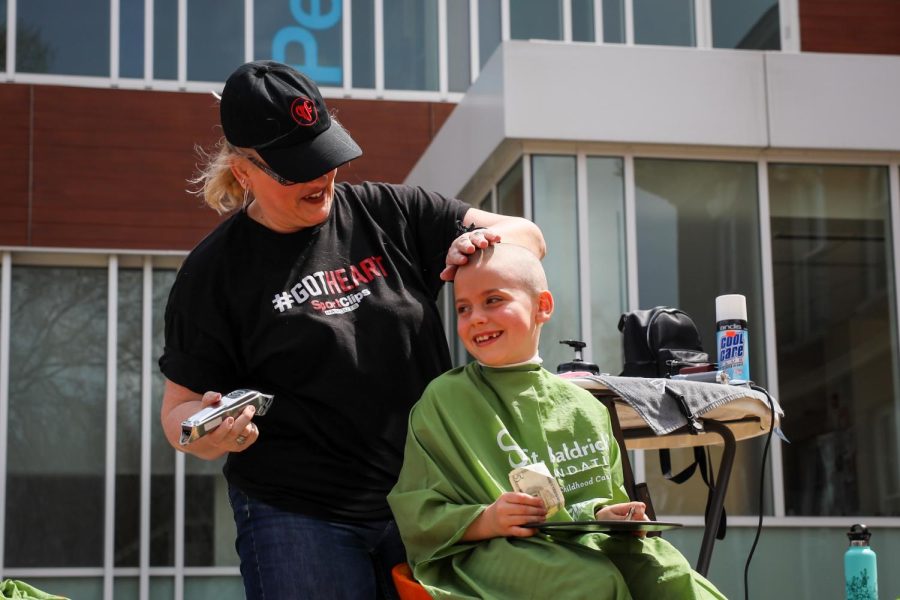 As volunteers began to fire up their electric hair clippers Saturday morning, applause rang out in Currey Park when Mahin Goel announced that the past seven years of student-led effort to support pediatric cancer research had raised more than $500,000 as of that morning.

The event, the seventh annual Chiaravalle Kids Conquer Kids’ Cancer, took place next to Chiaravalle Montessori School on Hinman Avenue, which is attended by students ranging from 16 months to grade 8.

Volunteers took turns going on stage to either shave their head or cut off their ponytail, against a festive backdrop of music, a merchandise sale and snack bar. All proceeds went to support pediatric cancer research through St. Baldrick’s Foundation. Dozens attended to cheer on the newly clean-shaven participants in their efforts to raise money and awareness for the cause.

This year, Goel, who is a sixth-grader at Chiaravalle, was the lead organizer of the event. Goel said they desperately wanted to see the event’s in-person return after the 2021 event happened online.

“To me, this means that we can give kids a chance and we have a chance at finding a cure.” Goel said. “This just means everything.”

While this was the seventh annual event, founder Sarah Zematis said her first event with St. Baldrick’s was in 2015, where she decided to donate her hair at a head-shaving event after losing several loved ones to cancer.

Twelve days after volunteering to cut her hair, Zematis said her daughter was diagnosed with cancer, which furthered her motivation to stay involved with St. Baldrick’s. In 2015, Zematis helped raise $56,000 for pediatric cancer research in 26 days.

“It really showed us what collective action can do when you put it towards good,” Zematis said.

Zematis co-founded the inaugural Chiaravalle Kids Conquer Kids’ Cancer event in 2016 with Joshua Rein, who was inspired by seeing his father shave his head at another fundraiser. The event has been led by students ever since.

Goel recruited a team of fellow Chiaravalle students to help run this year’s event. The young organizers worked to arrange logistics ranging from setting up the livestream to gathering support from Evanston businesses.

Feinberg Prof. Mita Sanghavi Goel, Mahin’s mother, said she served as this year’s lead organizer on paper — but in reality, played second-fiddle to her child.

”The role of the adults… has been to sit back and say ‘Oh my gosh,’” Mita Sanghavi Goel said. “Kids can do a whole lot more than I would have ever imagined.”

Sixth-grader Bennett Reed, one of the student organizers, said he’s been participating since the very first Chiaravalle-run event in 2016. Since he began, he said he stopped cutting his hair outside of the event — and hasn’t cut his hair since the last in-person event in January 2020.

“It’s a great event that shows how much our community cares,” Reed said.

Most of those who cut their hair or shaved their head at the event were students and Chiaravalle parents, including DJ Silton, whose son previously underwent cancer treatment.

Silton said this experience has made him passionate about funding pediatric cancer research.

Zematis said she hopes to see this event raise more money in the future for pediatric cancer research, which receives only 4% of the annual federal cancer research budget — in a field Zematis said is already underfunded overall. She said organizers are still accepting donations on St. Baldrick’s website.

Goel also said they are hopeful for the future of this event, especially as a new generation of students takes the mantle.

“Hopefully once I graduate someone else can take over and the cycle will just continue,” they said.

Correction: A previous version of this story misgendered Mahin Goel, who uses they/them pronouns. The Daily regrets the error and is committed to ensuring our reporters ask all sources for their pronouns.