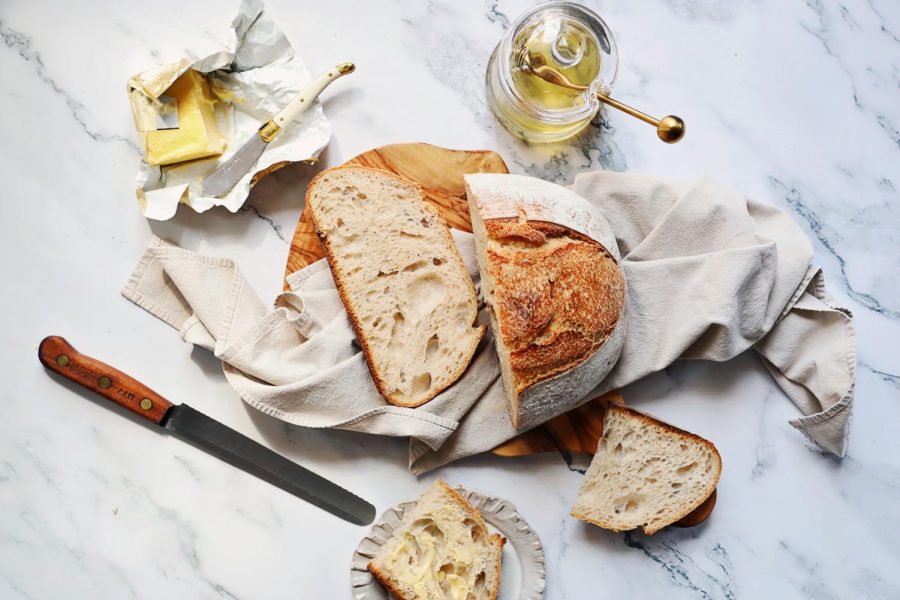 Products from Fred’s Bread are made mostly with ingredients from French suppliers or local vendors, like French butter and honey from Evanston’s Bond Artisan Foods.

When Frédéric Bressand moved to Evanston in 2016, he couldn’t find anything that reminded him of the bread from Dammarie, the small French village where he grew up.

After the COVID-19 pandemic hit, Bressand said he started making his own sourdough bread and sharing it with friends. After seeing the demand in Evanston for authentic French bread, he launched Fred’s Bread in 2020.

Since then, Bressand and his wife have been selling everything from croissants to orange blossom cinnamon buns through their online store and at the Evanston Farmers’ Market.

“We’re not reinventing the wheel at all,” Bressand said while working on a batch of bread. “I’m trying to stay more hands on, less machinery, so we can really conserve the bread.”

While he trained at a culinary school in France and has managed fine dining restaurants everywhere from Guernsey in the U.K. to the Caribbean to New York City, Bressand now works out of a shared kitchen in Evanston, he said.

When he’s engulfed in the intensive bread-making process, his wife, Kate Bressand, runs the operations as director of business development for Fred’s Bread.

“We’re very grateful for the opportunity to be at the farmers’ market, but also for the support from some of the other vendors and certainly the community of customers,” Kate Bressand said. “It’s really wonderful to be able to make so many people happy with the products and to really be able to have this wonderful connection that brings people home.”

Myra Gorman, who manages the Evanston Farmers’ Market, said Fred’s Bread has been a hit with customers.

“There’s constantly people in line, and they just love him, and they love his bread,” Gorman said. “It’s so fresh. He’s baking it the night before, and people can tell the difference.”

Fred’s Bread doesn’t yet have a storefront in Evanston, but customers can find its products at local businesses, like Patisserie Coralie and The Wine Goddess, when it’s not farmers’ market season.

Diana Hamann, owner of The Wine Goddess, said the partnership began when her business needed a new bread supplier and several customers suggested she reach out to Fred’s Bread. As an Evanston-based wine bar and alcohol retailer, the business now includes fresh baguettes from Fred’s Bread with its plates.

“So many of my customers say that his baguettes are as close to a French baguette as they’ve gotten outside of France itself,” Hamann said. “People have been really jazzed to be able to come to another one of their favorite places, The Wine Goddess, and to eat the bread from ‘the farmer’s market guy.’”

Frédéric Bressand said his products’ authenticity is due in large part to the ingredients he uses, which come primarily from local vendors in Evanston and suppliers in France. While most of his bread is made with only water, flour and salt, some of Fred’s Bread products feature local honey from Bond Artisan Foods in Evanston, as well as French chocolate and butter.

Hamann wasn’t the only one to highlight the authenticity of Fred’s Bread. Adeline Courtial, a French teacher at Roycemore School, said her favorite of Bressand’s breads is the olive loaf, which features picholine olives from the south of France, where she is from.

“I went to the farmers’ market, and then I heard Fred speaking, and I heard that he had that French accent,” Courtial said. “He said, ‘If you want, I could come to your school one day and maybe we can make some pizza dough.’”

Looking forward, Frédéric and Kate Bressand said their dream is to open a boulangerie on Main Street.

The couple said they’re currently looking at leases for an Evanston storefront, which they hope to open early next year. Frédéric Bressand also said he hopes to pursue a collaboration with Northwestern at some point to offer his products to students year-round.

Gorman said she looks forward to picking up fresh bread from a Fred’s Bread storefront in Evanston, and she also emphasized the important role the business plays in her market.

Correction: This article has been updated to better reflect the ingredients used in the bread-making process and the locations where Frédéric Bressand has worked. He has managed fine dining restaurants in Guernsey and the Caribbean, not in Ghana and Ireland. The Daily regrets these errors.

— Everything Evanston: A new challenge for the Evanston Farmers’ Market?