Alt: Ukrainians have demonstrated their willingness to fight. Their survival depends on the provision of aid and weaponry. 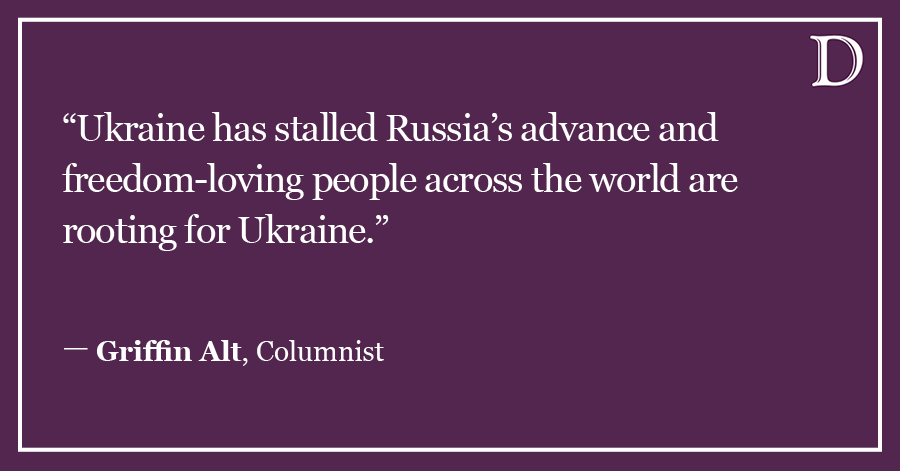 The Chairman of the Joint Chiefs of Staff Mark Milley declared that Kyiv could fall in 72 hours. The United States offered to help Ukrainian President Volodymyr Zelensky flee Ukraine. The world watched as Russian forces began to invade Ukraine. All of this happened in late February. It is now mid-April. Kyiv still stands, the flagship of the Russian Navy just sank, Ukraine has stalled Russia’s advance and freedom-loving people across the world are rooting for Ukraine.

Rather than abandoning his country and leaving it to collapse without strong leadership, Zelensky instead declared, “The fight is here; I need ammunition, not a ride.”

The United States, NATO member-states and other democratic, free nations must not only continue to provide military, financial and humanitarian aid to the besieged citizens of Ukraine. They must also increase the quantity and quality of their provisions so that Ukrainians can build off of Russia’s stalled momentum. Russian troops have not retreated from Kyiv, Chernobyl, and other positions. Rather, they conducted a strategic withdrawal that will allow their forces, who have been plagued by logistical and morale issues, to regroup and mount a powerful offensive in eastern Ukraine. The coming weeks are going to be decisive, and Ukraine must be provided with what it needs.

In the months after the Battle of Britain, during which Germany had a failed attempt to destroy the willingness of the British to continue fighting through aerial bombardment, former Prime Minister Winston Churchill pleaded to former President Franklin D. Roosevelt in a radio address: “Give us the tools, and we will finish the job.” On Wednesday, President Joe Biden authorized $800 million in additional military assistance to Ukraine, including artillery, armored personnel carriers, and helicopters. While this is a major upgrade for the depleted Ukrainian forces, it will not last long against the Russian military with their 2021 budget of about $62 billion compared to Ukraine’s 2020 budget of  $5 billion.

The United States and its allies must provide Ukraine with the weapons that it needs and has requested so Ukraine can repel the Russian offensive in the East that began Monday. This success would force Russian military leadership and oligarchs to come to grips with the fact that they are in a hopeless position and it is time to move on from President Vladimir Putin.

Much like how Winston Churchill said the British Empire and its Commonwealth had their “finest hour” as they held out against the Axis powers, Zelensky and the Ukrainians are having their finest hour standing up to Vladimir Putin.

Zelensky is a more unlikely hero than Churchill. While Churchill had served the British Empire as a soldier and statesman for decades, Zelensky previously worked in entertainment and had no military experience. Still, he has captured the support and attention of the world with his simplicity, perseverance and leadership. There are parallels between the two men. The Allies turned the tide of the North African campaign at El Alamein against Erwin Rommel, Churchill announced, “This is not the end. It is not even the beginning of the end. But it is, perhaps, the end of the beginning.” The Battle of Kyiv was Zelensky’s El Alamein, and the initial phase of the war has ended. Much like how the Germans lost their momentum and failed in the application of Blitzkrieg, Russia’s forward motion has slowed.

Zelenksy has become an inspiration across the world and his commitment to staying in the conflict zone has invigorated the moral courage of his countrymen in the fight of good vs. evil. Last week, Zelensky walked through the streets of Kyiv with British Prime Minister Boris Johnson – a very powerful image. The meeting was improbable a month ago when air-raid sirens echoed across Kyiv and Russian forces attempted to encircle the city.

Vladimir Putin has never been in a more vulnerable position, with domestic protests against the ‘special military operation’ in Ukraine, an economy greatly inhibited by sanctions and destined for a recession and Joe Biden – the leader of the free world – accusing Putin of committing genocide. Putin knows his ruling grip has weakened and opposition towards him has grown, evidenced by him cracking down on social media use, appointing new military leaders and purging inner circle members for misjudging the “special military operation.”

What we have witnessed over the past month is arguably the most significant event in international affairs since the end of the Cold War. A prolonged war and increased domestic issues would pose an even greater threat to Putin’s leadership. If he is toppled, China, Iran, North Korea and other adversaries of freedom and democracy may think twice before terrorizing other nations. The fate of Ukraine is not only dependent upon its courageous citizens, but also on whether countries provide Ukraine with the weaponry to defend their sovereign territory.

Griffin Alt is a Weinberg freshman. He can be contacted at [email protected]. If you would like to respond publicly to this op-ed, send a Letter to the Editor to [email protected]. The views expressed in this piece do not necessarily reflect the views of all staff members of The Daily Northwestern.