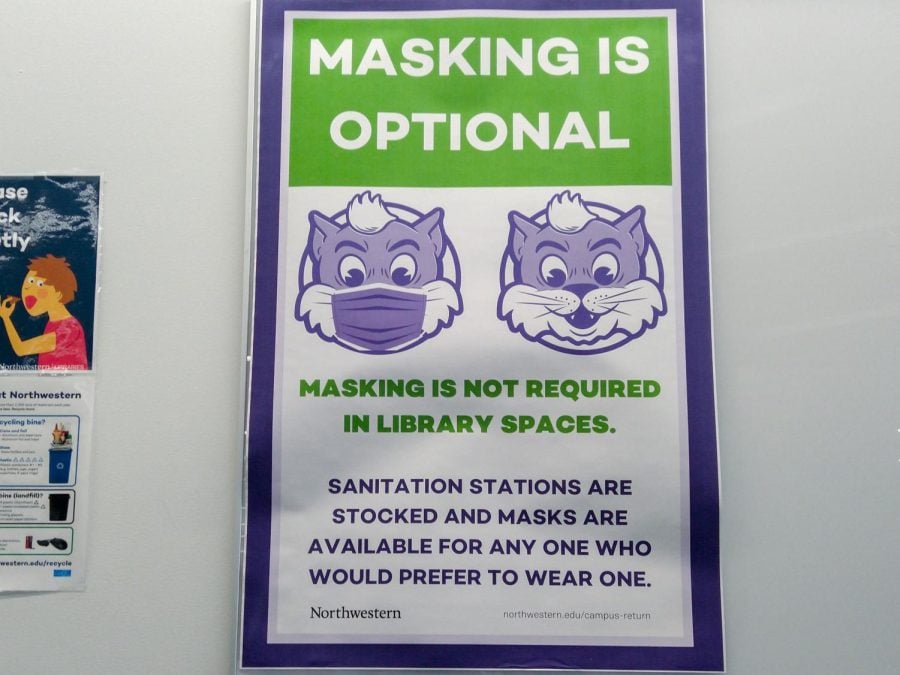 A Wednesday email from Vice President for Operations Luke Figora made no comment about the uptick of COVID-19 cases on campus after acknowledging the “high” transmission level in Evanston.

Northwestern’s positivity rate reached the second highest reported throughout the pandemic at 5.91% in the absence of testing and masking requirements on campus.

The highest positivity rate, 5.98%, was reported at the end of Fall Quarter when about 3,400 tests were received and most students had already left campus for Winter Break.

This week’s rate is 0.21 percentage points higher than the third-highest positivity rate reported on Jan 7., coinciding with the peak of the omicron wave, when the University reported the highest number of cases in a single week.

At that time, students were required to complete entry testing — with about 16,400 tests conducted that week — and the masking mandate in all public spaces was in place. With fewer than one-third the number of tests conducted this week, the positivity rate surpassed that of the peak of the omicron wave.

“I’m not surprised that there’s now been an uptick,” Bodé said. ”We could see a significant (decrease) in cases if we reinforced the mask mandate in at least classrooms.”

This trend was also seen across Evanston during the same timeframe, with the city reporting an increase to 197 cases compared to last week’s 95. While case numbers and positivity rates rise, however, the Illinois Department of Public Health decided to stop tracking these metrics per interpretation of national guidelines.

Non-undergraduate students made up 27% of the cases with 81, staff members constituted 29  and faculty accounted for 18.

Residents of Sargent and East Fairchild were not asked to take any additional steps regarding these outbreaks but were instead encouraged to “continue to be mindful” of symptoms, hygiene and large gatherings, according to emails obtained by The Daily. Those living in Chapin were asked to refrain from hosting guests through April 17 and to test if symptomatic.

Weinberg freshman and Chapin President Cara Chang said common spaces in the building have also been temporarily shut down.

The email didn’t require residents to test, and Chang said she does not have jurisdiction to do so either. Chang also said she would have appreciated transparency from the University, including notification to the entire campus community about specific outbreaks.

In a Wednesday email to The Daily, the University acknowledged the heightened positivity. University spokesperson Erin Karter said this trend follows that seen in surrounding communities and universities across the country.

While Karter said Quarantine and Isolation Housing is “significantly below capacity and well below the highs seen in January with the omicron surge,” the University has yet to comment on the heightened positivity to the broader campus community. Karter said the University strongly encourages mask wearing where distancing is not possible.

Weinberg sophomore Maria Luiso said she’s felt decently well taken care of in Hinman, from being supplied with blankets and snacks to having a nurse who checks on her every morning.

However, when her symptoms started to worsen, Luiso said she felt concerned, especially given her family’s medical history. She said she had a hard time getting hold of a nurse in the evening when she called and was transferred to another line telling her to visit the emergency room.

When she called the Hinman front desk to ask about her options, the attendant told her they could only offer some over-the-counter medications. Luiso said she called a nurse herself, who told her to schedule an appointment at Searle Medical Research Building.

However, when she asked the Hinman front desk to leave, the supervisor wouldn’t let her.

“I understand that people could lie to them,” Luiso said. “But I was also really scared at that point, and I was like, ‘I can’t believe that I’m not being allowed medical treatment.’”

She called the front desk again asking to see a doctor. When she was transferred to the supervisor, they said they had misunderstood the request and allowed her to go to the emergency room.

“It was scary knowing that it was so challenging to get any assistance,” Luiso said. “Even though we’re young people, we’re still worthy of concern.”

This article has been updated to include student comment.