Griffith: Musk, free speech and a lot of tweets 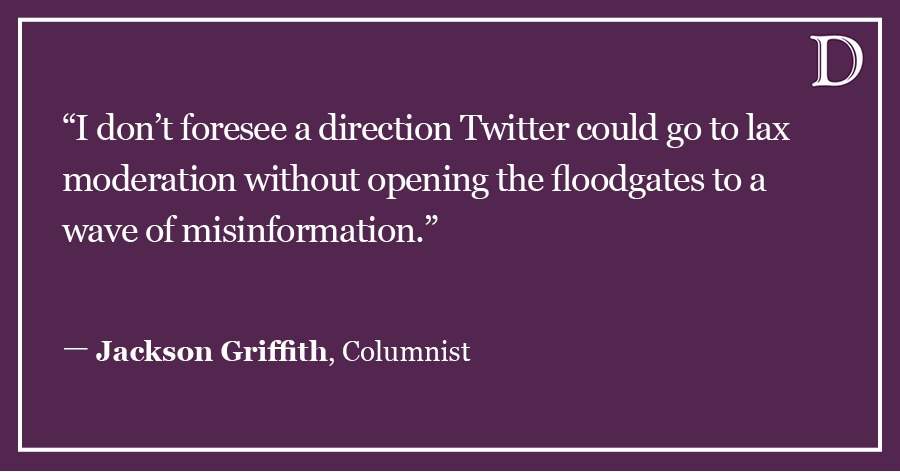 Elon Musk now owns 9.2% of the social media platform Twitter (TWTR), worth about $3 billion after a more than 25% soar Monday. This groundbreaking acquisition comes on the heels of Musk’s criticism of the platform, claiming Twitter fails to adhere to the principles of free speech. Musk even tweeted last week he was “giving serious thought” to starting his own social media platform. Musk, who has almost 81 million followers on the platform, is now its largest shareholder.

Musk has come into conflict with the Securities and Exchange Commission for his use of the app; he’s no stranger to memes and has amassed a following of extremely dedicated followers. Seemingly any financial asset acknowledged by Musk on Twitter turns to green on the market. This has led to a wave of fanboys attempting to get the Tesla CEO to acknowledge their meme stocks and NFT projects.

Musk has undoubtedly been a passionate user of the platform, creating his account in 2009 and tweeting over 17,000 times. He has certainly benefited from Twitter and his following on the app coincidently rose with his wealth as he became the richest man in the world.

While I do not believe Musk is aiming to buy out the platform, I do think he has some major plans behind his $3 billion endeavor. But could Musk be seeking to change the policies that helped launch him to a new echelon of celebrity?

First, it should be noted current Twitter CEO Parag Agrawal shared excitement about working with Musk, stating in a tweet that Musk will “bring great value to (the) Board.” Twitter Co-Founder and former CEO Jack Dorsey also expressed excitement about Elon’s arrival to Twitter’s board of directors. This seemingly dispelled speculation Musk was attempting an aggressive restructuring of Twitter, yet many are still wondering what changes he will seek in terms of moderation.

Musk has been critical of Twitter’s moderation policies, even going so far as to say Twitter’s policies undermine democracy. While I do not agree with that assertion, I do believe there are major decisions to be made in the Twitter board room, and Musk, a stated “free speech absolutist” will bring a good perspective to the board moving forward.

A Twitter free from any moderation would simply yield a platform rampant with misinformation, propaganda, scams, bots and hate speech. I don’t believe this is Musk’s goal. Twitter’s Terms of Service is very clear about what is permitted on the platform, and when a high-profile user, such as former President Donald Trump, is suspended from the platform, Twitter publicly addresses the reason for the suspension.

I don’t foresee a direction Twitter could go to relax moderation without opening the floodgates to a wave of misinformation and deception, but I’m interested to hear Musk’s thoughts. I hope the board will routinely reexamine if its policies are best suited for the platform because it has a responsibility to ensure Twitter’s policies continue to serve its self-proclaimed purpose of serving public conversation.

I truly believe Musk will have a positive impact in that discussion. I believe Twitter’s current policies do an effective job in keeping the platform free of misinformation and harmful practices while also providing an avenue to free speech for all. If there is a path to a more free speech-friendly platform, while also maintaining effective measures to prevent the spread of misinformation, then it should be explored. But as it stands, I think the folks over at Twitter do a good job in balancing this.

Jackson Griffith is a first-year graduate student in the Master’s in Public Policy and Administration Program. He can be contacted at [email protected]. If you would like to respond publicly to this op-ed, send a Letter to the Editor to [email protected]. The views expressed in this piece do not necessarily reflect the views of all staff members of The Daily Northwestern.