Men’s Tennis: No. 25 Northwestern cruises past Michigan State, falters against No. 6 Michigan 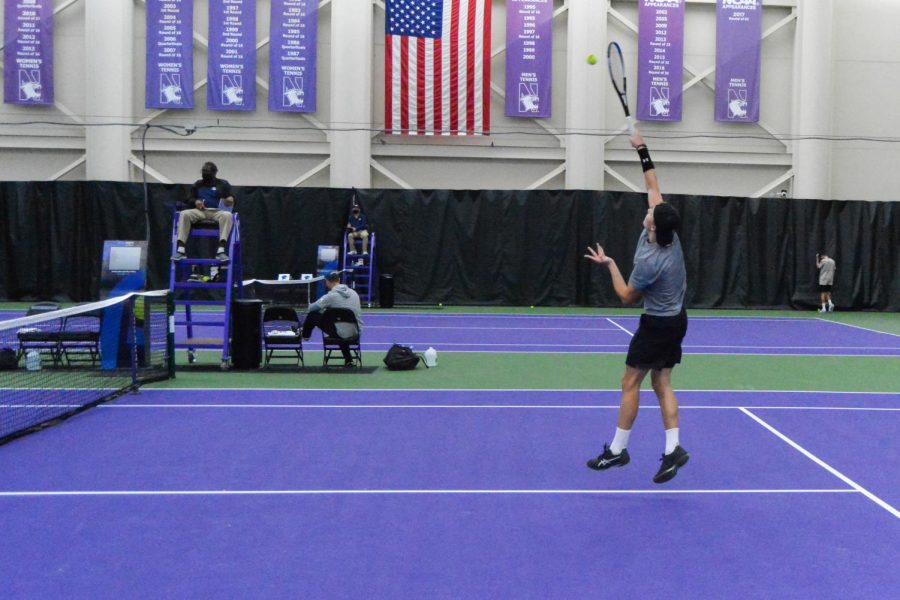 Northwestern split a pair of matches over the weekend against two Big Ten foes.

The No. 25 Wildcats (13-7, 2-2 Big Ten) hosted Michigan State (13-9, 0-4 Big Ten) Friday, having won their past eight showdowns against the Spartans. Michigan State coach Gene Orlando, currently in his 31st year at the program, is the longest-tenured head coach in the conference.

“He’s the elder statesman in the Big Ten,” coach Arvid Swan said. “He’s a great leader within our coaching group.”

Senior Simen Bratholm and graduate student Brian Berdusco were able to grab the decisive point. The duo has only one loss in their last five matches.

“Brian and I played a solid doubles point,” Bratholm said. “That team is really good in doubles.”

In singles, the Cats picked up momentum. Berdusco doubled the team’s lead with a 6-2, 6-4 individual victory over Josh Portnoy.

Sophomore Presley Thieneman needed a tiebreak to win his first set against Graydon Lair, but dominated from then on. Swan praised Thieneman’s forehand setup and play from the corners as the sophomore posted a 6-0 second-set shutout.

“Loosening up and just going for my shots (helped),” Thieneman said. “Trusting myself to control points and have the match on my racquet instead of playing not to lose.”

Freshman Felix Nordby put the match beyond reach for the Spartans with a comprehensive straight-sets win.

The remaining courts all went to super tiebreaks. No. 37 Steven Forman, a senior, extended the lead to 5-0, but senior Trice Pickens couldn’t recover from his slow start. Bratholm closed the match out for NU. He staved off a comeback effort from Max Sheldon to finalize the 6-1 overall victory.

“When we play (Michigan State), they’re going to play really hard,” Swan said. “At the end of the match, they played all the way through.”

No. 6 Michigan (14-2, 4-0 Big Ten) arrived in Evanston with a ten-match win streak, including wins over then-No. 1 Texas Christian and No. 2 Ohio State. Forman, a Troy, Mich. native and the Cats’ top singles player, transferred from the Wolverines in 2019.

NU’s doubles matchups were heartbreakers. Forman and Nordby grabbed a 6-3 win over the nationally sixth-ranked duo of Andrew Fenty and Nino Ehrenschneider. The Cats had match points on the remaining two courts, but lost tiebreaks on both.

“I think we played for an hour…usually, the doubles point lasts 30 minutes,” Bratholm said. “Unfortunately, we just didn’t close it.”

No. 27 Ondrej Styler edged out a second set against Forman, but Thieneman defeated No. 43 Jacob Bickersteth 6-2, 7-5 for his first career victory against a ranked opponent.

Thieneman’s plan, anticipating wide serves and creating forehand cross-court rallies, worked to perfection. Tied at 5-5 in the second set, Bickersteth called Thieneman’s return long on a deuce point but was overruled by the chair umpire.

“There was another close return earlier in that game that I questioned and she called it out,” Thieneman said. “It felt good to get back because I thought I lost that game.”

Michigan’s Gavin Young found crucial breaks down the stretch to defeat Nordby and Ehrenschneider clinched the match for the Wolverines against Berdusco. Pickens lost another three-setter, but Bratholm gave NU a silver lining with a win over No. 33 Fenty.

Bratholm displayed resilience in the first set, recovering from an early break and saving six set points across a 26-point tiebreak. He broke late and won 7-6 (14-12), 7-5 on his own serve as the match eventually ended at 5-2 overall.

“When it gets to 9-9, you don’t really care if he’s serving or I’m serving,” Bratholm said. “You get tight and nervous, so I just tried to make balls and not waste any points.”

“Everyone’s tough in the Big Ten,” Thieneman said. “Getting mentally ready is going to be the key.”