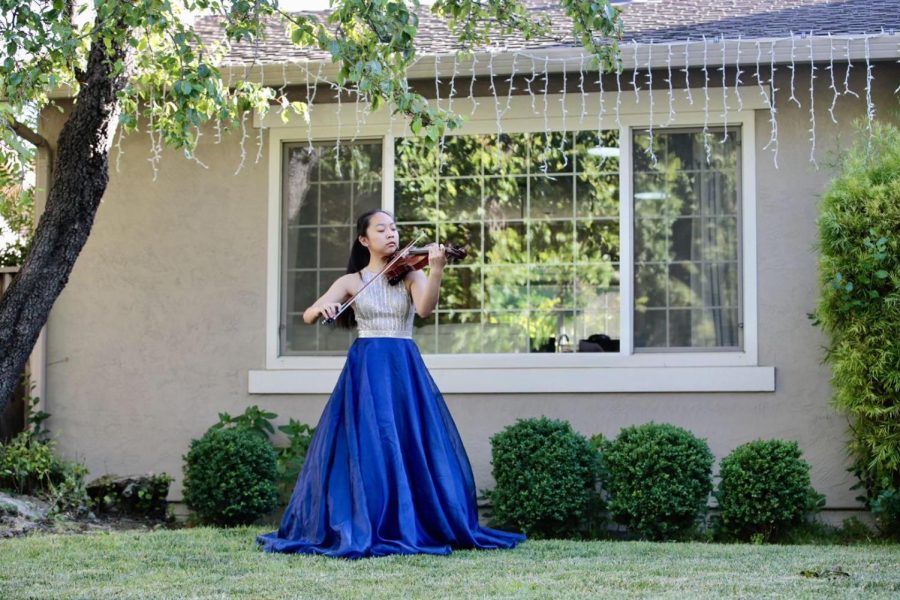 Jade Zhang playing the violin. Zhang is still pursuing a double degree, but does not plan to have a career in music.

Some artists, and their relationships with their craft, have grown and evolved in the two years since the pandemic first struck. Quarantine and restrictions have meant more time for art, but even the creative world isn’t immune from the virus’s impact.

For Medill freshman Angel Jordan, the increased free time during quarantine encouraged her crafts. Jordan began painting more and even learned how to crochet during the initial phases of the pandemic and said this form of artistic creation was comforting.

“I am someone who is very social,” Jordan said. “I need to interact with people. And when you’re in a pandemic, you can’t really do that.”

One of her favorite projects in the last two years was using her dead pointe shoes as painting canvases. In honor of the anniversary of her studio’s spring dance show, “The Lion, the Witch and the Wardrobe,” Jordan made a character-based pointe for every character. She also made miniature wardrobes to present them.

But this boost was not the same for all of her art forms. As a ballet dancer, Jordan said her inspiration was lacking during the shutdown.

“I had a weird relationship with dance during the pandemic,” she said. “I had the space to, but didn’t really have the ideas.”

After the initial stages of the pandemic, and especially since arriving at Northwestern, Jordan said she’s gotten more into dance, with more access to studio space and more classes available.

Weinberg freshman Ava Earl, a singer-songwriter, said she is also familiar with these lulls in motivation to produce songs. She said she had writer’s block during quarantine and described feelings of loneliness, isolation and confusion.

“For a long time, I didn’t (produce new songs) because I feel like I draw a lot on my relationships with people,” Earl said. “I really didn’t have that.”

She also said the pandemic slowed her release process, despite having songs written and ready before the virus hit the U.S.

However, she said this experience isn’t entirely unique to the pandemic because she often experiences cycles of creativity and then lulls.

During the pandemic, Earl released her 2021 album “The Roses,” along with an array of singles.

Without as much social interaction to spark song ideas, Earl found new sources of inspiration. She began taking inspiration from fiction rather than interactions with others.

Earl reread “Enchanted Forest Chronicles,” a book series she first read when she was younger. She then wrote her 2021 single “Cimorene,” named for a character from the book. She said she also drew influence for the song from Taylor Swift’s album “Folklore” when it was released.

“I wanted to create something similar to a lot of those songs for me, that created the same mental images as the book had,” Earl said. “I wanted to make something that sounded really whimsical and spiritual and magical.”

Together, the book series and album motivated Earl’s songwriting. This was an adjustment from her previous inspiration coming from real-life experiences.

Jordan, who is also a writer, similarly altered her creative process.

“Being in isolation, it expanded my creativity a ton because there was a time where I was literally living by myself,” Jordan said.

This new practice of visualizing and creating art independently bleeds into her other crafts, she said, helping her make all kinds of art.

Jordan and Earl aren’t the only ones whose artistic endeavors transformed after quarantine. Weinberg and Bienen junior Jade Zhang, who plays the violin, said her experience with music was deeply impacted by the pandemic.

Music classes were hit hard without the ability for musicians to rehearse together.

“Personally, I’m a musician and the reason why I love music is because I love playing with other people,” Zhang said. “And that was the core of just what was taken away.”

Instead, Zhang had more time to focus on technique, she said, but she also said she and her orchestra conductor noticed an overall decreased skill level in playing as a group.

Navigating music alone was a challenge, but she used tools like Zoom to practice with peers and find motivation to play, she said.

Though she is still working toward a dual degree, Zhang said she decided she isn’t pursuing music as a career. That doesn’t mean she is giving it up altogether though, as she will still pick up her instrument in her free time and for class.

“It was realizing that I can live without it, and that it can be a hobby,” Zhang said. “I love music, but that doesn’t mean I need to pursue it professionally.”

— Sastoque: What the pandemic means for the arts