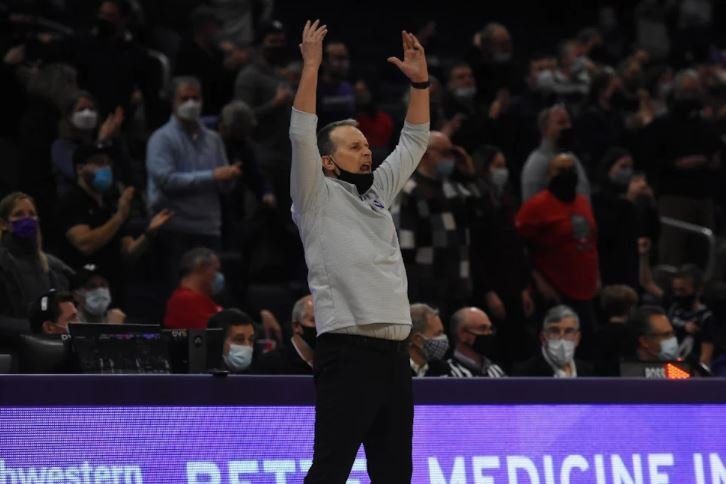 Chris Collins throws his hands in the air. Collins will return for a 10th season at Northwestern in 2023.

Northwestern coach Chris Collins will return for the 2022-23 season, the athletic department announced in a Monday afternoon release.

“At the conclusion of a challenging season, I share in the disappointment felt by our staff and avid fans,” athletic director Derrick Gragg wrote. “I have tasked Coach Collins with making necessary changes to build towards success in the 2022-23 campaign.”

The announcement comes on the heels of a bitter end to the 2022 season for the Wildcats, who lost 112-76 in the second round of the Big Ten Tournament to No. 24 Iowa. The loss followed a 71-69 win over Nebraska that represented NU’s first postseason win since 2017.

Collins is 133-150 in nine seasons with the Cats. He is the only coach ever to lead NU to the NCAA Tournament, taking the Cats to the Second Round in 2017. However, he has overseen five consecutive losing seasons in the years following. NU lost at least 10 games in a row every year from 2019-21.

The Cats entered 2022 with high expectations in star forward Pete Nance’s senior year but were unable to capitalize on an 8-2 start and faded in Big Ten play.

“We are committed to evaluating all aspects of the program to ensure we are supporting this team with the foundation necessary to compete and win in the nation’s best college basketball conference,” Gragg said.