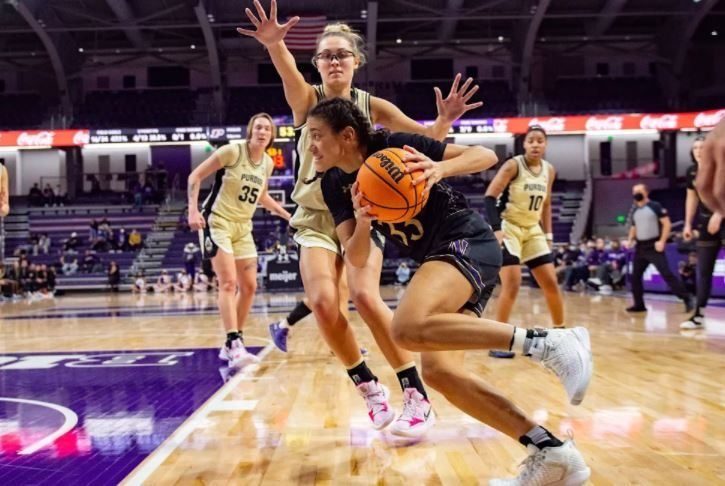 INDIANAPOLIS — The victory started as it was supposed to.

Minnesota passed up a layup to find junior Second Team All-Big Ten guard Sara Scalia waiting to knock down a three. Scalia averages 3.4 made threes per game, so that was expected.

Northwestern responded with an offensive rebound and put-back and-one by senior grit-mongerer and All-Big Ten Honorable Mention Courtney Shaw. Shaw averages the fourth-most offensive rebounds in the country, so that was anticipated.

It looked like the game was going to flow fluently as both teams played to each of their identities in the first several minutes. But that’s not what happened in this 65-60 Wildcat victory. What ensued was four full quarters of utter clamor and chaos.

After a couple minutes of play, the Cats smeared an 11-0 run all over the game, as Minnesota also proceeded to miss seven consecutive shots. NU went up eight at a certain point, but finished the quarter up three.

Then the streaks started coming. The Golden Gophers regained the lead at 20-19, and the Cats fell sorely quiet. They missed seven… no, eight… no, nine shots in a row. Minnesota scored six… no, eight points in a row. Instantly, NU was looking up from a seven-point trench. Instantly, Minnesota missed four shots. Instantly, it was a one-point game at halftime.

The fourth quarter stumbled through the door, seemingly intoxicated, and then the game became tied at 54. The benches became tight, and the atmosphere in Gainbridge Fieldhouse was tense. Sophomore forward Paige Mott stopped jumping around on the sideline. A couple free throws went by, and then the game boiled over.

Senior guard Veronica Burton drove to the hoop, with her team down one, and amid contact and tight pressure, she missed. Everything. The shot clock kept running. Shaw, however, had been one rebound away from a double-double for over a quarter, and there it was, gleaming right on the baseline. Shaw kicked it to Burton who kicked it to junior guard Laya Hartman.

Now would be a good time to mention the Cats were as efficient from beyond the arc today as an old man typing with his two index fingers. They finished 3-23 (13%).

Hartman hit the third three for the Cats. As the ball fell through, the buzzer sounded. Game over. It was only the shot clock that went off, but that 3-pointer is what sealed it.

“It really took away some momentum that Minnesota had gotten,” said coach Joe McKeown. “It, in a way, shut the door.”

With that three, with that Burton assist, with that Shaw extra effort, the right team came out on top.

“We knew the team that wanted it more was going to get it,” said Burton. “And in the fourth quarter, we really showed that.”