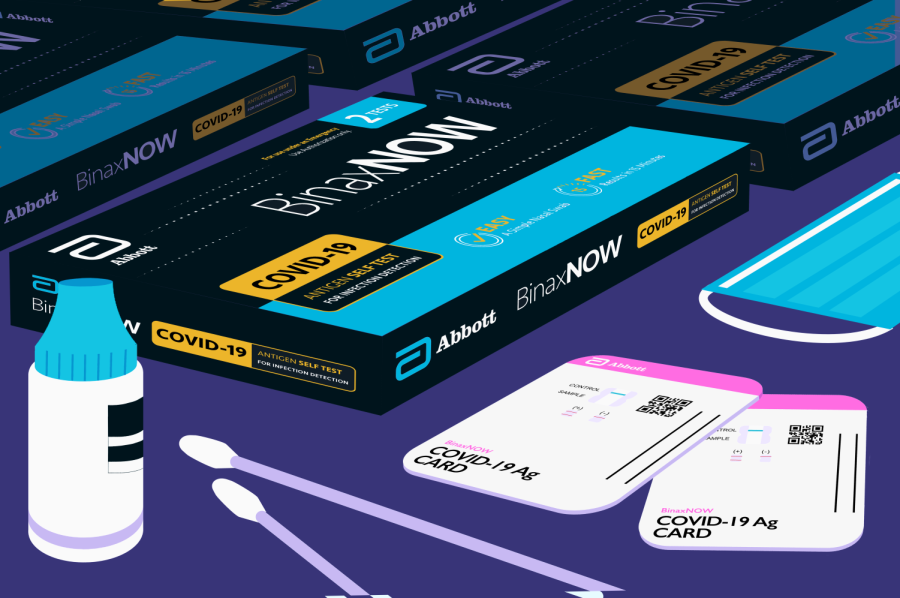 The Daily compiled data from Northwestern, Evanston and Illinois to depict trends in COVID-19 positivity rates and case numbers over the last year.

This story will be updated periodically as new testing data is released.

This story is split into several sections:

— The methodology of the collected data

— A review of Winter and Spring Quarters 2021

— The full interactive graphics of all data since January 2021

It’s been almost two years since the first confirmed COVID-19 case at Northwestern. The Daily compiled testing metrics for NU, Evanston and the state, along with the context of mandates and phased reopenings, to provide a full account of the pandemic since campus reopened in Winter Quarter 2021.

About the aggregated data

Data aggregated for this story is primarily drawn from NU’s COVID-19 Dashboard webpage, which updates every Friday at about 1 p.m. with on-campus testing data for the week. Evanston’s weekly situation reports and aggregated data that coincide with the University’s time frames. State test positivity rates are from the Illinois Department of Public Health.

Data prior to winter 2021 is not included given that the University did not distinguish between undergraduate and non-undergraduate students. Some individuals who fit more than one identifying category were counted in both.

The University also adjusted its released data from the first two weeks of this year to remove duplicate positive results from individuals who retested after their five-day isolation period.

In terms of Evanston COVID-19 data, since the city shifted its contact-tracing efforts to the state on Jan. 20, there’s been a one-day delay in reporting data. This means that data included in the graphs after Jan. 20 will be offset from the NU and state positivity rates by one day.

Evanston metrics include data received from NU students, faculty and staff who are city residents.

After a two-quarter hiatus from campus, students were welcomed back to campus Winter Quarter 2021 with a two-week Wildcat Wellness quarantine period and weekly testing requirements. Campus was not at full capacity — with most classes following a remote or hybrid model — and more than 8,000 tests were returned each week, with the exception of one week in February 2021.

During the week of Feb. 22, 2021, the second floor of Sargent Hall and first floor of Elder Hall were given “Stay at Home” orders in response to local outbreaks. Those orders required students on these floors to quarantine in their dorms and test three to four times during that odperiod.

Similarly, Evanston and the rest of Illinois experienced a minor spike in COVID-19 cases in early February of that year. Evanston’s vaccine access at the time was significantly lower than Chicago and the rest of Cook County, partially due to significant vaccine shortages faced across the country at the time.

Spring Quarter 2021 began with a modified Wildcat Wellness period, as well as weekly antigen and PCR testing for all students. With more students on campus, more tests were sent and reported than during Winter Quarter.

At the end of Spring Quarter, Evanston and NU lifted their indoor mask mandates with the assumption that COVID-19 cases had significantly declined.

Due to improving infection metrics and vaccination rates, Illinois also moved into its final stage of its reopening plan starting June 11, 2021, which removed capacity limits on businesses and events and allowed large gatherings like conventions and concerts to take place.

After the Centers for Disease Control and Prevention revised its guidelines advising fully vaccinated individuals to wear masks indoors in June, the University relaxed several of its COVID-19 protocols.

Fully vaccinated individuals on campus were no longer required to mask indoors or outdoors or complete weekly testing.

Ten days later, the University saw an increase in its positivity rate, despite most students being home for Summer Break. The number of tests received at NU during the summer drastically declined to fewer than 1,500 tests each week.

With reported NU COVID-19 positive cases in the single digits from May to July 2021, the proportions of cases reported for each group varied greatly from week to week due to each case making up a greater portion of the total than in previous weeks. After this time frame, reported positive cases increased and category shares largely stabilized.

A wave in COVID-19 positivity rates was also observed statewide that August, coinciding with a peak in delta infections.

Students returned to campus in September 2021 for fully in-person instruction. Campus COVID-19 cases stabilized at relatively low levels for almost the entirety of Fall Quarter. From move-in day to the beginning of Reading Period, only one week had a positivity rate of more than 1%, and none had 100 or more new cases. The delta variant was the predominant COVID-19 strain nationwide during the majority of the quarter.

Entering December, this trend began to reverse. As the highly infectious omicron variant spread throughout the U.S., new positive cases on campus nearly doubled each week for three weeks straight, despite a rapidly dropping number of returned tests. The campus positivity rate hit an all-time high of 12.9% in the first week of Winter Break, with 228 positive results out of only 1,767 tests.

During the remainder of Winter Break, fewer people took COVID-19 tests on campus, so the period from Dec. 17 to 30, 2021, did not have data on positivity rates or returned tests. The University instead relied on self-reported results for its weekly dashboard updates, which yielded a total of 1,415 new positives. During this period, Evanston’s positivity rate more than doubled to above 8.1%, and Illinois’ rate more than doubled to 18.1%.

After this, NU announced Winter Quarter would begin with a Wildcat Wellness period on Dec. 20, 2021, shifting all classes to remote and instating a testing requirement for two weeks. Upon students’ return to campus in the first two weeks of January, returned tests exceeded 10,000 for the first time since the beginning of Fall Quarter. These weeks had positivity rates of 5.7% and 3.4%, and the week of Dec. 31 to Jan. 6 posted a new all-time record of 936 new cases.

On Jan. 10, the city issued a vaccination mandate, requiring all individuals to demonstrate proof of vaccination prior to entering public shared common spaces like restaurants and fitness centers.

Despite this, NU fully returned to in-person classes on Jan. 18 and extended the testing requirement by one week. In the weeks since, the number of returned tests has fallen back to about 4,500 each week. After the first three weeks of in-person instruction, both new cases and the positivity rate had declined significantly: Jan. 28 to Feb. 3 had a rate of 2.25% and was the first week since the end of Fall Quarter to record less than 100 cases.

This trend reversed soon after, and new cases multiplied for the next two weeks, mostly coming from undergraduate students. Between Feb. 3 and 17, new undergraduate cases nearly tripled from 57 to 167 while other categories stayed stable or decreased, driving the positivity rate to as high as 4.4%.

The following week between Feb. 18 and 24, the positivity rate declined again to 3.42, statistically significantly higher than Evanston’s 0.9% and Illinois’ 2.5%. Despite this greater spread on campus than the surrounding area, NU lifted its indoor masking mandate in all non-instructional spaces on Feb. 28, aligning itself with similar lifts in Evanston and Illinois on the same day.

The data declined again the next week, as NU reported 62 new positives and a 1.8% positivity rate for Feb. 25 to March 3. These numbers are the lowest reported since the end of Fall Quarter, and are likely to fall further as Winter Quarter ends and Spring Break begins.

On March 15, NU announced it would lift its indoor masking mandate for instructional spaces at the beginning of Spring Quarter due to improved health metrics.

Shortly after, cases rose again as BA.2, a more infectious omicron “subvariant,” composed the majority of new cases across the country. The University only conducted 1,160 COVID tests during Spring Break, but still yielded 45 new positives for a heightened positivity rate of 3.88%. Evanston’s overall rate nearly doubled to 1.21%, and the state’s ticked up to 1.6%.

After the first week of Spring Quarter, Evanston’s positivity rate increased to 1.14%, and the state’s to 1.7%.

All graduate and undergraduate students were required to complete at least one in-person COVID test during the first week of Spring Quarter. This yielded 160 new positives for the week, with a positivity rate of 1.71%.

To view the full metrics since January 2021, review the following interactive charts.

To find a vaccination location near you, take a look at the interactive map of Evanston.