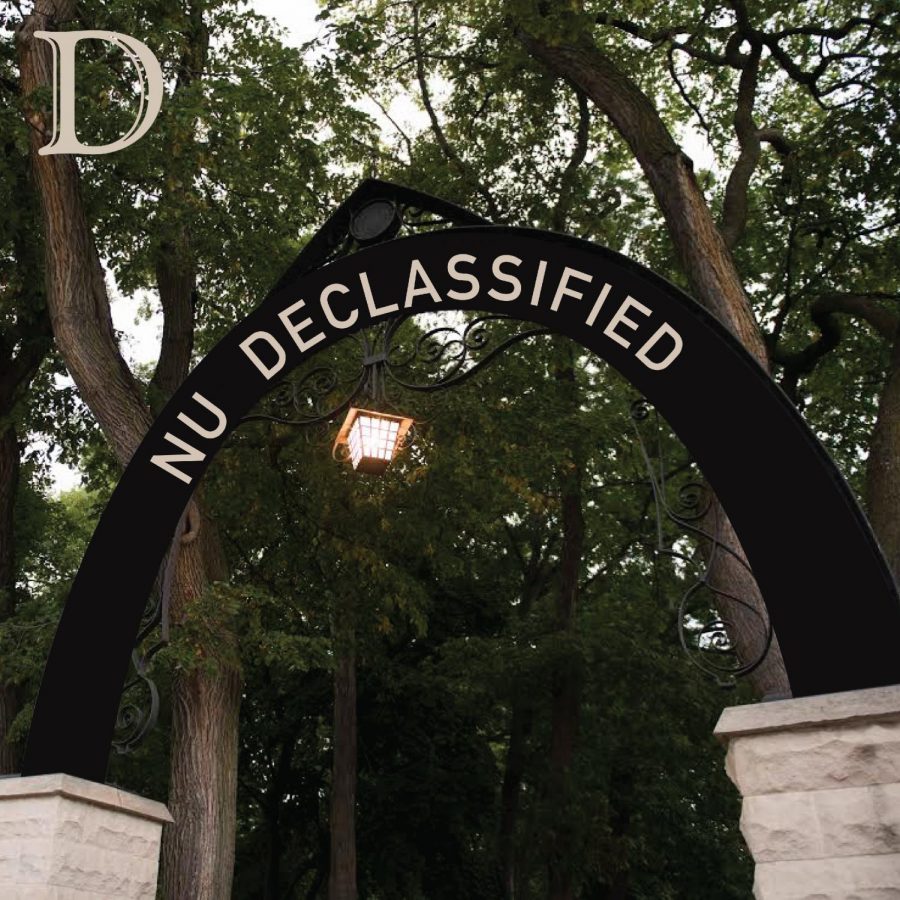 JOSH BLOOM: There’s no late-night food. You can’t even get bad food late at night. Everything closes at eight or 10. I would be up in the middle of the night — I’m a very nocturnal person — and just be like, hungry.

JOANNA HOU: That’s Josh Bloom, a SESP junior and the managing director at The Table, a by-students, for-students, late-night food delivery service. The Table is working to expand Evanston’s food options after 9:00 p.m. But in its quest to meet students’ cravings, it’s also facing some challenges.

SHANNON TYLER: And I’m Shannon Tyler. This is NU Declassified, a look into how Wildcats thrive and survive at Northwestern. In this episode, we’ll be learning all about The Table, from how it operates to how the team cooks.

JOANNA HOU: Northwestern students started The Table back in 2018. Since then, it has remained completely student-run, from directors and marketers to chefs and other kitchen staff. While it originally concentrated on late-night food, a partnership with Brewbike shifted The Table’s focus to early-morning options, like breakfast sandwiches and overnight oats, starting in spring 2018.

SHANNON TYLER: The Table decided to shift its business model again in fall 2020, focusing on late-night food after the breakfast model had limited success. While it had a solid plan going in, COVID-19 moved its production to a ghost-kitchen model, a delivery-only food prep operation with no indoor dining.

JOSH BLOOM: I think the previous owners were trying to transition that more towards catering, and then when the pandemic began they decided to go as a ghost-kitchen delivery model. So that’s where we are right now. I think our business model was really developed around COVID.

SHANNON TYLER: Evanston has been losing late-night dining options for years now. Cheesie’s Pub & Grub, a soup and sandwich restaurant that stayed open until midnight, closed its doors in 2018. In December 2020, Evanston’s Burger King, which stayed open into the early hours of the morning, also shuttered.

SHANNON TYLER: Its food may be greasy, but The Table works to ensure its meals are also high-quality and made with care. It cooks chicken, fries and waffles to order, and creates all its menu items, including the pickles, in house.

JOANNA HOU: Sulwen Ma, a Weinberg freshman, is the kitchen director and head chef at The Table. She said the kitchen’s secrets lie in its sauces.

SHANNON TYLER: Sulwen got into cooking when she decided to take a gap year at the start of the pandemic. But she initially took the pastry route.

SULWEN MA: I took a really last-minute gap year during COVID, and I actually ended up attending culinary school for pastry and baking in New York, at the Institute of Culinary Education. I’ve always loved food, and I’ve always loved art. So pastry is just like the perfect amalgamation of both.

JOANNA HOU: The Table’s only had a few pastry specials, including a partnership with NUconnections for Valentine’s Day brownies. But Sulwen is warming up to cooking. On Thursdays, she goes into The Table’s ghost kitchen to marinate the chicken, dredge it and stir up the sauces.

SHANNON TYLER: These efforts are all part of The Table’s second goal: providing good food to the community.

JOSH BLOOM: When I got here as a freshman, my favorite restaurant was Chipotle, and I don’t know if that says anything, but it means that the dining options in Evanston are nothing like what they are in other college towns or in Chicago.

JOANNA HOU: Josh and Sulwen work together to develop recipes, a process Sulwen said is all about patience.

SULWEN MA: Josh will come to me and he’ll be like, “We need a new waffle batter.” And I’ll be like, “Wow, so true.” And then I’ll look at what we currently have, which is a really simple batter with just a ton of cinnamon. And then what I do is, you slowly start adding and swapping ingredients. So you can play with like baking sodas, baking powders, the amounts of cinnamon, like your flour-to-buttermilk ratio, and then you kind of just play around with the ratios until you get like a perfect texture.

JOSH BLOOM: Some of the things we think about is how to balance out the fat with the acidity, how to get texture contrast. A lot of things you would be thinking about at a high-end level and sort of introducing that in the form of a cheaper food option.

JOANNA HOU: Having inexpensive options is important for a food service that largely caters to undergrads. Josh said he wants The Table to be a space where students can build community.

SHANNON TYLER: Goldie Beck, a Communication freshman, found out about The Table at 1:30 a.m. when she was working a shift at the library. Someone came over with a card from The Table and advertised its chicken and waffles. Since then, The Table has become one of her go-to late-night food options.

GOLDIE BECK: I’m usually hangry and panicked, and my roommate is always down to order with me and we’ll go through the process. There’s no late-night food in Evanston, so we’ll say like, “Oh, let’s try something on campus,” and they’ll close early or “Oh, let’s, let’s try Insomnia Cookies,” and we don’t really want that sweet stuff. And then we’re like, “Let’s do something savory.” And The Table always has our back. I sent them a couple DMs and said, “You up?” And there they were, up, ready to serve us.

JOANNA HOU: Charlotte Sandler, Goldie’s roommate and a Weinberg freshman, also loves The Table. While the pair felt hesitant ordering from the company at first, Charlotte said The Table quickly impressed them with fast service and top-tier options.

CHARLOTTE SANDLER: I get those late-night cravings, you know, kind of like munchies. When you’re hungry at one in the morning, you kind of just want something quick, kind of like fast food. And it just hit the spot. It comes really quick too. I love the delivery aspect of it. Like they text you. They’re like, “Ok, it’s gonna come,” and it’s contactless and the food is so hot.

SHANNON TYLER: Goldie was pleasantly surprised by the quality of The Table’s food as well. She said the chicken is —

GOLDIE BECK: So tender. Charlotte — my roommate — and I were describing the food as, It’s almost like the sushi of chicken because it really melts in your mouth, but there’s this firm texture on the outside and then this juicy texture on the inside. Very crisp.

JOANNA HOU: Charlotte loves many items on the menu, but The Table is also special to her because it gives her a chance to share with friends. She’s introduced a lot of her friends to The Table with her top menu item: chicken nuggets.

CHARLOTTE SANDLER: They’re actually a pretty big size, like even when I get an eight-piece, I feel like it’s enough to share with your friends. They really do give you a lot of bang for your buck.

SHANNON TYLER: Despite attracting some diehard fans, The Table is struggling to sustain a solid customer base. Though it’s tried using social media to promote its brand, turnout is not as high as it’d hoped.

SULWEN MA: Not enough students know about us or think of ordering The Table late at night, when we are just a very viable and delicious option. I think we’re just lacking basic order capacity.

JOANNA HOU: Sometimes, the lack of orders can be hard to deal with, especially because staff put in a lot of time.

JOSH BLOOM: Honestly, it’s really hard. It’s really frustrating. A lot of people here, they request late-night food, but at the end of the day they don’t order, and that’s a problem. I feel like at the end of the day, you have to ask yourself, “Why is there nothing open late at night?” The answer is there’s just not enough demand. Finding a way to communicate that we have a late-night option to the student body and to the people of Evanston, that’s something that’s pretty difficult.

SHANNON TYLER: Even though The Table is difficult to run sometimes, Josh said he’s excited to keep expanding the business. To him, The Table is like —

JOSH BLOOM: Being in a relationship or being in a marriage. It’s very hard and very challenging, but it’s also very rewarding. I’ve met a lot of people at Northwestern, and a lot of people have trouble finding things that they’re passionate about. And then they end up going into consulting or finance or CS and just being unhappy for the rest of their lives. The fact that I found something that I’m passionate about and actually enjoy this early on in my life, it’s just a sign that I have to keep pursuing it.

JOANNA HOU: The team is making efforts to expand its customer base. It’s beefed up its advertising and recently started expanding its menu to accommodate different diets.

SULWEN MA: Josh and I have been playing a lot with vegan and gluten-free options. We’ve been playing with a fried mushroom sandwich, a vegan milkshake, things like that.

SHANNON TYLER: In an effort to build up a bigger presence, The Table has also entered talks with Compass Group, the University’s food service provider, to potentially establish an in-person location.

JOANNA HOU: If approved, Josh said Norris University Center would be the most likely location for these late-night eats. They’re also trying to preserve the meal-swipe option at a potential in-person location.

JOSH BLOOM: It’s definitely hard to move from a ghost-kitchen model that’s pretty low-volume like ours, to like an in-person model. It’s a big jump. And there’s a lot of considerations. I think our biggest concern right now, especially with moving onto campus, is ensuring that people still have access to meal swipes and people can still get free food and that, our option wouldn’t be taking away anything, it’d be supplementing.

SHANNON TYLER: Until then, The Table’s staff will continue filling the hearts — and stomachs — of students and community members from its ghost kitchen.

SHANNON TYLER: And I’m Shannon Tyler. Thanks for listening to another episode of NU Declassified.

JOANNA HOU: This episode was reported and produced by Shannon Tyler and myself. The audio editor of The Daily Northwestern is Will Clark, the digital managing editor is Jordan Mangi and the editor in chief is Isabelle Sarraf. Make sure to subscribe to The Daily Northwestern’s podcasts on Spotify, Apple Podcasts or SoundCloud to hear more episodes like this.