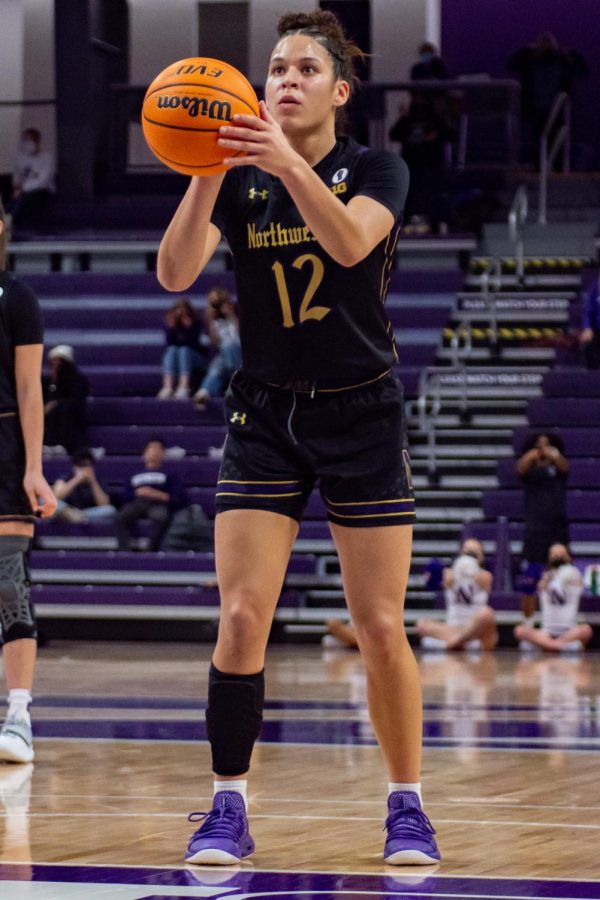 Veronica Burton shoots a free throw. Upon concluding the regular season, Joe McKeown said, “Nobody in college basketball, in my opinion, has done more for her team than Veronica Burton for this team this year. It’s amazing.”

Sixty-eight teams make it to the NCAA Tournament each year, including the “First Four” games. 32 teams automatically qualify through conference championships, and the other 36 teams are left up to “at-large” bids.

Northwestern is ranked 64th in the country, leaving their future hanging in the balance. Heading into today’s matchup against Nebraska, ESPN had the Wildcats as the “Last Team In.” Now, with only the Big Ten Tournament left on the schedule, NU’s 73-59 loss to Nebraska could reduce them to the “First Team Out.”

This Nebraska team is a borderline top-25 team, receiving votes in the Coaches Poll and ranked No. 21 on the NCAA’s website. It was an important game, and it could have been a bid-clinching game for the Cats. If not, a win against the No. 10 seed in the Big Ten Tournament would have sealed it for them.

But enough with the “ifs,” because NU didn’t get the job done in Lincoln, Nebraska today.

Now, the Cats might need two wins in the Big Ten Tournament to get that assurance. A single victory against the No. 10 seed might not cut it, so they’ll have beat No. 21 Iowa in the quarterfinals. NU’s road to the NCAA Tournament has become a bit more arduous.

Sunday’s matchup was a good game before it wasn’t.

The Cats trailed by two after the first quarter and trailed by three at halftime. First-year guard Laya Hartman led the way, going 4-for-4 from the field with two 3-pointers, totaling 12 points. Senior point guard Veronica Burton found herself on the bench for several minutes in the second quarter due to foul trouble. With a spread-out scoring attack, however, buckets came from five other players, and NU hung around.

And then Nebraska went on a run — a run so detrimental that it possibly ruined the Cats’ postseason chances.

“They hit back-to-back threes to open a quarter, and it just caught us off guard,” coach Joe McKeown said. “They were able to get the ball inside a little bit. We missed some shots we normally make. It was just a hard-fought game. I thought we battled.”

If the game consisted of only the first, second and fourth quarters, the game would have ended in a tie. Nevertheless, the rules state that the third quarter must count towards the final score, so the 14-point differential in that time frame won Nebraska the game. Sophomore guard Jaz Shelley went 4-for-4 from the field, including three 3-pointers for the Cornhuskers, scoring 13 in the third.

Finishing as the No. 7 seed in the Big Ten, NU will face Minnesota, who beat the Cats two weeks ago in Minneapolis, in the first round of the Big Ten Tournament.

“They shot the ball really well against us,” said McKeown about their previous matchup. “We’ve got to do a better job matching up with their shooters.”

NU is on the bubble. There’s a lot of ifs and buts right now. They could just win the Big Ten Tournament and make everybody’s lives so much easier. But that’s easier typed than done. What the Cats need is to move forward, beat Minnesota on Thursday and keep that bubble from bursting.