Hot from the Oven: Croissants, COVID-19 and community at Patisserie Coralie 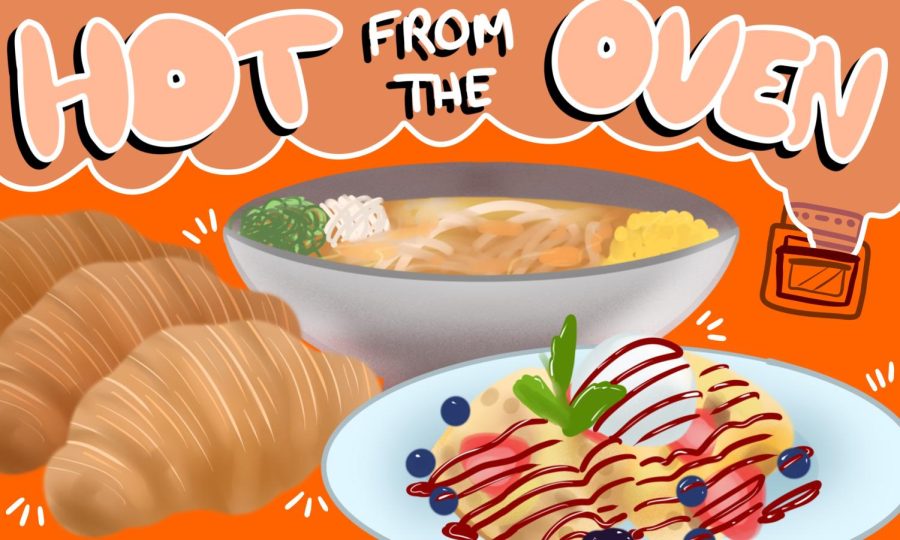 Lucia Barnum and Ava Mandoli
The Daily Northwestern · Hot from the Oven: Croissants, COVID-19 and community at Patisserie Coralie

This photo-audio story is a part of the Hot from the Oven series, a profile on local Evanston eateries to get a glimpse behind-the-scenes of their staff, clientele and history.

Patisserie Coralie is a French-style bakery in the heart of Evanston. Owner Pascal Berthoumieux walks us through the everyday of running a bakery and keeping a small business afloat amid the COVID-19 pandemic.

LUCIA BARNUM: Walking into this quaint little bakery, the first thing you’ll notice is the miniature French flags along the countertops and the Eiffel Tower decal on the window. French tea tins and packaged snacks line shelves along the wall. And behind the bar, trays of croissants tower six feet high. The smell of hand-pulled espresso shots hits you as a barista calls out orders.

AVA MANDOLI: Rows of macarons and glossy French pastries fill the display case. Customers sit and sip cappuccinos, the low buzz of their conversations against a background of French music fills the air.

LUCIA BARNUM: No, you’re not in Paris. You’re at the corner of Chicago Avenue and Davis Street, right here in downtown Evanston.

LUCIA BARNUM: And I’m Lucia Barnum. This is Hot from the Oven, a limited podcast and photo series highlighting local restaurants and bakeries in Evanston. And today we’re taking you to Patisserie Coralie, a local stop for French pastries, coffee and culture.

AVA MANDOLI: Patisserie Coralie is a small business, with only about a dozen staff members. But while other places have struggled to make it through the past two years, this bakery has thrived.

LUCIA BARNUM: Pascal Berthoumieux is the owner and founder of Patisserie Coralie. He’s been working in the industry since he was 16 years old —

PASCAL BERTHOUMIEUX: — Oh, I got the virus at a young age —

AVA MANDOLI: And was working on the Champs-Élysées, a street in Paris famous for its restaurants, shopping and culture, when he met his wife, an exchange student from the University of Illinois at Urbana-Champaign.

LUCIA BARNUM: After two years, she couldn’t extend her visa further. So, he decided to follow her back to the states. Before coming to Chicago, he remembers asking around —

PASCAL BERTHOUMIEUX: Hey, where do I go find a job in this country, in this city?

LUCIA BARNUM: A friend of his wife told him:

PASCAL BERTHOUMIEUX: Well, look, if you were working on the Champs-Élysées, go on Michigan Avenue. That’s our Champs-Élysées there.

AVA MANDOLI: As soon as he landed, he dropped his resume off at all the hotels along Michigan Avenue, where he eventually got his first job in the U.S. He’s been living, working and raising his family here ever since.

LUCIA BARNUM: Pascal founded Patisserie Coralie in 2014, which he named after his oldest daughter. After opening two other restaurants in Evanston, he wanted to focus on being a dad.

PASCAL BERTHOUMIEUX: The bakery concept was a good one because I could be at home at night and put my daughters to bed. And that was the whole game plan there.

AVA MANDOLI: Since then, he’s opened two other locations: one in Pancoe Life Sciences Pavilion at Northwestern and one near the Loop in Chicago. Pascal said days at the bakery start at four in the morning —

AVA MANDOLI: — so that every pastry can be baked fresh that day.

LUCIA BARNUM: It’s not easy to run an authentic French patisserie in the Midwest. Pascal said not all their recipes are completely traditional. But they use French butter in their croissants and offer individual-sized pastries and tarts instead of full-sized cakes, just as they do in the cafes along the streets of Paris.

PASCAL BERTHOUMIEUX: If you have ever traveled to Paris or France, we just want to recreate the same atmosphere of feeling that you’re in another place. You know, if you feel a little bit of that, then we did a good job at it.

AVA MANDOLI: Besides its French charm, Pascal said part of the beauty of Patisserie Coralie is its role as a community space. Showing us around the bakery, he pointed out that customers were talking to each other — barely any were glued to phones or computers.

LUCIA BARNUM: Having a place where people can sit down, grab a coffee, talk to a friend and not worry about work is crucial to the patisserie’s role in the Evanston community.

PASCAL BERTHOUMIEUX: We are really one of those businesses that are part of the neighborhood. We’re really in the heart of the community.

AVA MANDOLI: Pascal said you can’t find that at big chains like the Peet’s Coffee or Starbucks down the street. When asked about the challenges of being a business owner and an immigrant, he said one of his biggest concerns was competing with big chains.

PASCAL BERTHOUMIEUX: When my brother came, the first thing he said to me, “Man, American people, you guys need a third arm, you know, attached to your body to hold your cup of Starbucks.” I’m like, “Yeah, it’s kind of like that. They are, Americans are like like pre-wired to just push the Starbucks door.”

NATHAN WILSON: Working there, I felt kind of gross.

NATHAN WILSON: For cafes, you either need to be a pit stop or a destination. And we, because of our decorations, because of the kind of setup — that does make us the destination.

LUCIA BARNUM: Pascal thinks the culture around supporting local businesses is getting better. While some people might once have settled for a Starbucks mobile order, he said more and more customers are starting to value the importance of small businesses.

AVA MANDOLI: When Illinois ordered them to shut down in spring 2020 —

AVA MANDOLI: The bakery team was filled with anxiety and uncertainty about when they would be able to reopen, if at all.

PASCAL BERTHOUMIEUX: And we all probably thought for a while, “Well, this is the end.”

LUCIA BARNUM: When Patisserie Coralie did reopen later that year, Pascal said they were especially worried about whether or not people would want to spend money at a bakery with all the economic pressures around COVID-19.

AVA MANDOLI: As a small local business, they knew they wouldn’t be able to stay open without community support.

PASCAL BERTHOUMIEUX: We are the best place to take the pulse of the neighborhood, right? I can tell you if people are happy and have money, or if they are no money and unhappy, because the first thing you’re going to skip is your coffee in the morning and your croissant in the morning if you’re hurt or, you know, if you’re not in the mood for going out. So I’m very well aware of that.

LUCIA BARNUM: But Pascal said the Evanston community showed up for them. He said more and more customers realized that spending money at local coffee spots instead of big chains would keep local businesses alive.

AVA MANDOLI: He spent much of the pandemic preaching the importance of skipping Starbucks and choosing a small coffee shop from town instead. His hard work paid off.

LUCIA BARNUM: 2021 was Patisserie Coralie’s best year since they opened seven years ago.

PASCAL BERTHOUMIEUX: — and I think you’ll get the same answer from a lot of business owners —

AVA MANDOLI: — is the impact of the nationwide labor shortage. Finding skilled baristas and chefs, especially those with French pastry training, is extremely challenging.

PASCAL BERTHOUMIEUX: — to me, it’s revolution —

PASCAL BERTHOUMIEUX: You can argue that it takes about like two weeks to make someone a server — it will take two years to make someone a good line cook.
AVA MANDOLI: On top of labor shortages, Pascal said he’s worried about the state of the downtown area in Evanston.

LUCIA BARNUM: Many local businesses have closed since early 2020 — including beloved local spots like Unicorn Cafe and La Macchina. While Patisserie Coralie hasn’t struggled to stay afloat in the same way that others have in the downtown area, it saddens him to see how many small businesses have come and gone.

PASCAL BERTHOUMIEUX: I’ve seen this town being on top of the game where it was like, as they like to call it, the destination of the North Shore. Which is not anymore — I mean, you have to admit it.

AVA MANDOLI: It isn’t just Evanston. Pascal said it’s getting harder and harder to bring local or regional small business concepts everywhere, particularly in parts of the Chicago suburbs. Opening restaurants is getting more and more expensive, and small businesses just don’t have the money to compete with nationwide chains.

LUCIA BARNUM: He said Evanston still has potential. But it may be a while until residents have the vibrant, bustling downtown area they knew for so long.

PASCAL BERTHOUMIEUX: I think right now we just are not doing that well. I think it’s going to take a few more years than most people would like until things start turning around.

LUCIA BARNUM: Thanks for listening to another episode of Hot from the Oven. This episode was reported and produced by Ava Mandoli and myself. The audio editor of The Daily Northwestern is Will Clark, the digital managing editor is Jordan Mangi, and the editor in chief is Isabelle Sarraf. Make sure to subscribe to The Daily Northwestern’s podcasts on Spotify, Apple Podcasts or SoundCloud to hear more episodes like this.