The Daily Explains: What’s happening with economic development in Evanston? 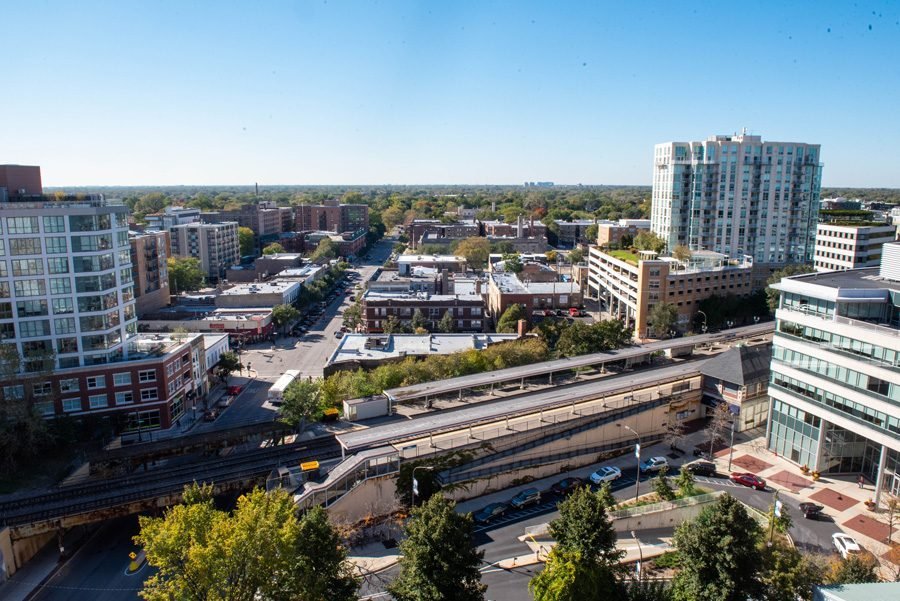 An aerial view of downtown Evanston. The Downtown Evanston business district is planning to work on attracting more office tenants and investing in apartment building developments in order to stimulate economic growth post-pandemic.

Once a city that relied on office buildings to attract workers and stimulate business, Evanston’s economy suffered when many offices went remote. Now, the city government is working with business districts to rejuvenate the economy and has approved over a dozen large-scale building developments over the past 18 months.

The Daily took a look at what’s going on with economic development projects around the city  and at the equity and development issues these projects present.

What is the focus of development in downtown Evanston?

Evanston’s current emphasis on office building development is part of the city’s larger plan to bring the local economy back to pre-pandemic levels.

Paul Zalmezak, the city’s economic development manager, said Evanston has historically benefitted from its dense concentration of office space. According to a May 2021 report by the city’s COVID-19 Business Task Force, Evanston’s pre-pandemic daytime population was close to 30,000 workers.

Yet as office buildings have switched to remote work over the past two years, Zalmezak said most daytime office employees are no longer physically working in Evanston.

“It is extremely important for us to have a strong daytime population,” said Annie Coakley, the executive director of Downtown Evanston’s business district. “They’re the folks that go to lunch, they run their errands, they get their haircuts, they go to the gym — all of the things that we provide.”

Is this initiative serving all residents?

Evanston’s main business districts are classified as Special Service Areas, meaning they receive funding from government tax levies to support businesses within the areas. The city has a total of four SSAs, because the east and west sections of Central Street each comprise their own SSA.

Linda Del Bosque, the founder of Evanston Woman Magazine and president of the Latinx Business Alliance, said these SSAs are drawn to exclude Black and brown communities. She said that although areas like the West End and Howard Street — which have larger Black populations — have their own business organizations, they receive far less government funding since they are not SSAs.

“If you look at the business districts, they’re designed to exploit the Black and brown community,” Del Bosque said.

In October 2021, Del Bosque started a petition to make all of Evanston into one larger SSA.She said this would allow funding to reach all businesses equitably, ultimately stimulating economic growth and wants to bring the proposal to City Council later this year.

What’s happening outside of downtown Evanston?

The Main-Dempster Mile SSA and the two on Central Street have not historically relied on office building development. Instead, they are focused on supporting small businesses and providing living spaces for commuters to Chicago or downtown Evanston.

Katherine Gotsick, the executive director of the Main-Dempster Mile SSA, said her area focuses on residential development and workforce housing for workers commuting to Chicago and downtown Evanston.

Though the construction may disrupt the area and create temporary parking issues, Gotsick said new development will ultimately direct more shoppers to the small businesses that the Main-Dempster Mile is known for.

“That’s the kind of atmosphere we would like to have: where people are constantly on the street, out shopping, enjoying themselves and serving the livelihood of small business owners,” Gotsick said.

“It’s all about creating opportunity,” Shaffer said. “We’re just trying to get the word out through social media and make sure we highlight every business that needs help.”

With many large-scale developments on the horizon, Gotsick said adaptability is key to survival and growth.

“A business owner whose business has been around for over 100 years once told me that when you own a business that long, you realize that things have to change,” Gotsick said. “They’re not going to stay the same. And you have to adapt.”

— The Daily Explains: What is a City Manager?

— Evanston small businesses seek support and give back amid inflation, COVID-19 woes