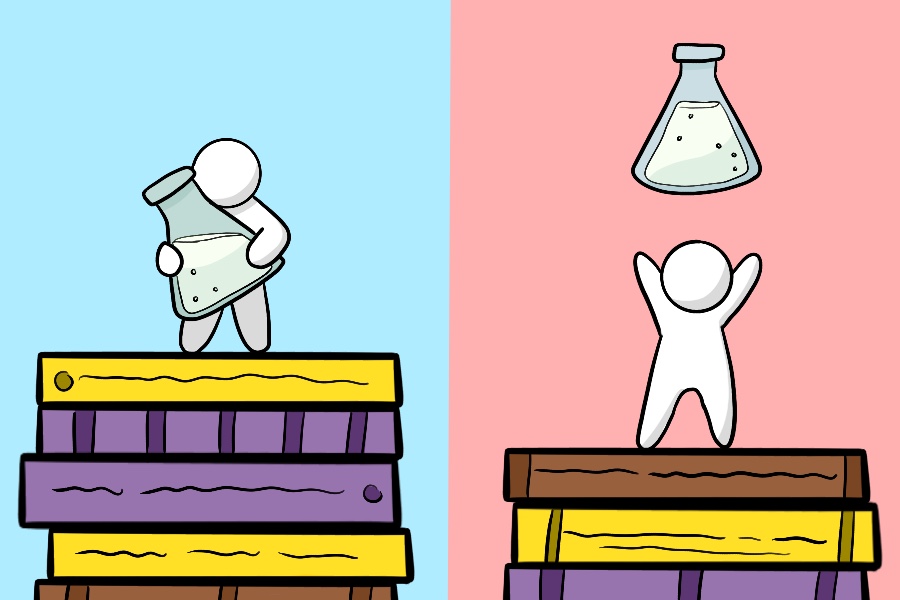 FGLI students at NU struggle with adjusting to STEM classes more than their wealthier counterparts.

Each year, a cohort of freshmen enter Northwestern and register for introductory STEM courses. Students in these roughly 200-person classes are often diverse in background, including in the high schools they attended.

For first-generation and/or low-income students who went to relatively less competitive high schools, like Weinberg junior Vivica Lewis, these courses prove to be more challenging than for wealthier students with rigorous academic backgrounds. Lewis said she noticed this in a chemistry peer-guided study group during her freshman year.

“I felt behind amongst the students in that group, where I was asking for extra help,” she said. “There’s this pressure to just get it. And I didn’t know who to tell that I just wasn’t understanding.”

Lewis attended Carmen High School of Science and Technology, a charter school in Milwaukee, Wis. She said while her high school was academically stronger than other Milwaukee schools, it did not measure up to preparatory schools nationwide.

Though Lewis did well in advanced placement courses, she said she felt ill-prepared for the advanced placement exams. For some students, including McCormick junior Bryan Sanchez, this created a false sense of confidence upon entering NU.

“(In high school,) I didn’t need to work hard to do extremely well and do better than others,” Sanchez said. “I came to Northwestern with that mindset … it was a culture shock.”

While Sanchez said NU’s coursework is a difficult adjustment for everyone, individuals who come from more rigorous high schools know how to approach it. He said opportunity-wise, students who attend high schools in majority-FGLI areas are often not exposed to fundamental aspects of STEM college experiences, such as research.

Exact statistics on the proportion of low-income students in NU’s class of 2025 were not made public, but just over 15% of its class are first-generation college students. And though many of these students come from low-income areas, some attended high schools with a higher degree of rigor.

For Weinberg junior Kasha Akhtar, high school was a more difficult experience than college and taught her what her strengths and weaknesses were. She said after struggling with biology in high school and excelling in AP Statistics, she realized she wanted to study statistics to some degree.

“I took AP Calc BC and I also took AP Stats, and both were pretty good and I would say both prepared me decently well for STEM at Northwestern,” she said. “(At NU) there was definitely a learning curve because things were moving so fast, but I think I was able to adapt to it.”

Akhtar, who studies MMSS, social policy and statistics, said she was adequately prepared for AP exams in high school and feels like she adapted faster than her FGLI classmates.

However, as a first-generation student, she said she was unaware of certain aspects of college that students with college-graduate parents learned about. Akhtar said FGLI students often experience imposter syndrome adapting to an environment full of students who were familiar with college growing up.

“A lot of times, you have to rely on yourself and you’re not taught to go to office hours and talk to your professor,” she said. “Whereas if you grew up in a family where your parents went to college and they tell you all about the college experience, that kind of mindset is just ingrained.”

Now in their third year of college, Akhtar, Lewis and Sanchez said they feel well-adjusted to NU.

Lewis said she entered as a pre-medical student and now studies sociology and global health, fields she said align more with her skill set. Although she might have still been on the pre-medical track at a university with a more accommodating introductory STEM course experience, she said she feels that her current career path is right for her.

“It’s definitely a lot better as I feel less in survival mode all the time,” she said. “Now I actually get to thrive and build a valuable career and not have to worry so much about just passing my classes.”

— After a summer of unpaid remote internships, low-income students reflect on SIGP