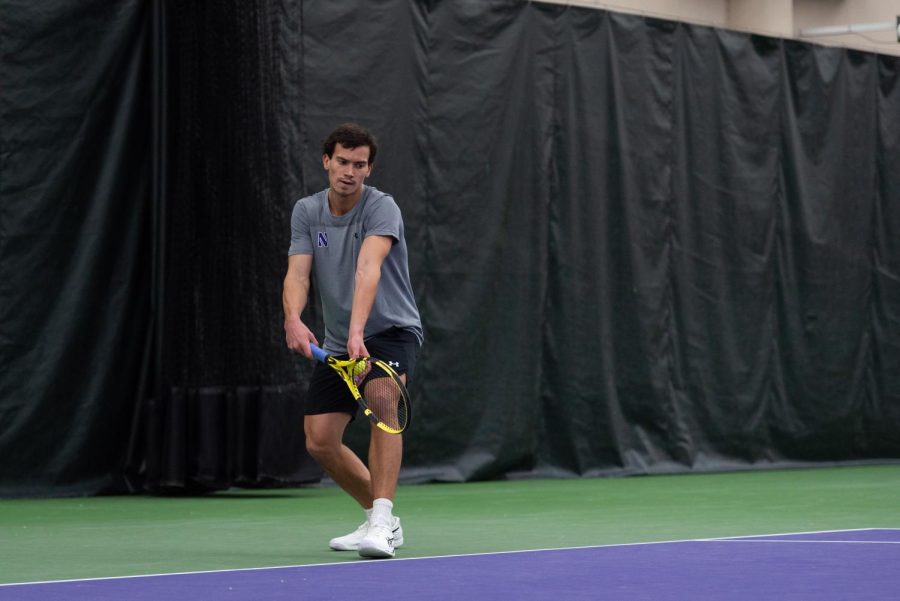 Brian Berdusco prepares to serve. Berdusco was part of Florida’s NCAA Championship-winning team in 2021 before transferring to Northwestern.

Graduate student Brian Berdusco had already reached the summit of college tennis at the University of Florida.

Having earned his bachelor’s degree and won a team national championship in a span of three months, nobody would have faulted him for hanging up his racquet after his senior year. Brian, however, had other ideas. He wanted to finish his NCAA career playing alongside his brother, Russell, a Northwestern junior.

“Originally, Brian expected to not continue his career, not take the fifth year at any school,” Russell said. “I was accepting of that decision, but I just encouraged him to take a second look and think about what attending Northwestern would do for his life, and if he would want to play one more year of tennis, especially with me.”

The fourth of five siblings, Brian was born in the midsize town of Bradenton, Fla., the birthplace of top 50 professional player Sebastian Korda. The Berduscos were “pretty serious about sports,” as Brian put it. Their older brother Michael briefly played tennis at Gettysburg College, and their two sisters, Annie and Ellie, swam in college.

Brian started out as a swimmer too, but decided to change sports when he was eight.

“It was around 40 minutes to the YMCA,” Brian said. “I really didn’t like it, so I was trying to find a different sport and there was a country club for tennis right next to my house.”

At age 10, Brian became a one-sport athlete. Playing at the collegiate level was always the goal, and he knew that he was good enough. He encountered many future teammates along the way, playing with and against Andy Andrade and twins Greysen and Harrison Cacciatore.

Most of his youth training took place on clay courts. Brian’s middle school coaches were from Spain, and they taught him according to archetypical Spanish style: running around his backhand and favoring his forehand. To this day, he credits his forehand as one of his strengths.

He also watched tennis quite a lot. Brian frequently attended tournaments in Lakewood Ranch, and the players from Pepperdine, a perennially solid program, made an impression. He took a look at the campus, which awed him, and committed to the Waves as a five-star recruit.

“The team was at a level where I could get a lot of exposure playing good guys against other teams,” Brian said. “Also, the idea of having my own life out in California and building it up from the start was enticing.”

Pepperdine didn’t live up to expectations. Despite a strong fall, Brian made just seven appearances in dual matches.

Soon after arriving, he looked for a way out.

“The focus wasn’t completely on tennis and the team environment, which is what I was wanting in a college experience,” Brian said. “The culture deteriorated before I got there.”

Florida coach Bryan Shelton convinced him to transfer. The Gators’ reputation was a factor, but talks with Shelton about practice schedules and hard work from his teammates-to-be sold him.

The impact was immediate. ​​He won the UVA White Doubles Draw Championship with Lukas Greif despite very little indoor experience, before switching partners to Johannes Ingildsen. The duo made the quarterfinals of the ITA All-American Championships before winning the ITA Regional Championships.

The win qualified them for the ITA National Fall Championships, where they reached the third round.

“It was so nice playing with him, because it was almost a lock that he was going to win the return points on his side,” Brian said. “I was playing with house money.”

Brian was still left out of the dual lineups, mostly due to an SEC rule that allowed a maximum of eight players across singles and doubles. Florida already had two non-singles players in their doubles pairings, Ingildsen and Will Grant, leaving no room for anyone else.

He was happy with his progress. The next year, Brian made his debut in team play, winning a singles match at No. 5 against Mercer. His largest contributions, however, were still in the fall. Brian continued to play with Ingildsen, but also took the court alongside Andrade and Greysen Cacciatore, his friends from youth tennis. The sophomore also partnered with current Gators Josh Goodger and Duarte Vale.

“All of them are extremely talented,” Brian said. “They all could play No. 1 at any other school in Florida.”

In Brian’s fourth year, he made two appearances in duals. Brian won doubles matches with Ingildsen and then-freshman Ben Shelton, the coach’s son. But the SEC rule still prevented him from acting as anything more than a de facto substitute.

At the NCAA Championships, the eight-player maximum was lifted. Shelton decided to pair Brian with Grant at No. 3 doubles, despite never appearing in a match together.

“My relationship with Brian off the court is so healthy,” Grant said. “Once we played with each other, it wasn’t a challenge at all.”

The two won their first showdown before dropping two in a row. They rebounded well, however, defeating a ranked opponent in the quarterfinals against Texas A&M before recording a crucial victory against Texas in the semifinals.

Brian and Grant weren’t as successful in the final against Baylor. His teammates came roaring back in singles, winning four straight. Once Ben Shelton clinched the title and ran to his father to celebrate, pandemonium ensued. Brian remembered his coach’s speech at the hotel afterward as the moment where it all set in.

“You can’t write a better story than that,” Grant said. “Some of us were crying. It was pretty special.”

It was an emotional goodbye for Brian, who already informed most of his teammates that he was considering transferring. His teammates and coaches were supportive. To this day, he manages to keep in touch with many of the Gators, mostly Vale, Greif and Grant.

Brian considered retiring before applying to medical school but his brother and junior coaches convinced him NU was a fitting next destination. Russell mentioned the improvement that he had seen among his teammates, and others emphasized the degree to which Wildcats coach Arvid Swan pushes his players. His father, who earned his MBA at Northwestern, also weighed in.

Swan already knew Brian from trying to recruit him — twice.

“He was an extremely hard worker,” Swan said. “That hasn’t changed.”

Swan put Brian with senior Simen Bratholm, and the chemistry didn’t take long. Brian and Bratholm won the Big Ten Doubles Championship in the fall, and Swan was impressed enough to pencil them in at the top doubles court.

Brian’s team debut in Wildcat purple came in the opening match in both singles and doubles; the indoor courts were an adjustment. He was dropped from the singles order for a while, before being reinstated against Duke. The hiatus worked. Brian won his first singles and doubles showdowns for NU on the same day, winning his next three singles contests as well.

Win or lose, both brothers were excited to be reunited.

“It brings a little bit of home into Northwestern,” Russell said. “I wish he was here all four years.”

Brian isn’t as sure. He finds it odd that he’s in a similar place as the freshmen, despite being five years older. Still, he tries to lead by example. Russell notes that Brian’s humility is something to learn from, as he tends to downplay his accomplishments and attribute them to others’ hard work when he’s equally responsible.

With tough opponents coming up — and the MCAT on the horizon — Brian’s time at NU is far from over.

“(It was) an opportunity I couldn’t pass up,” Brian said. “I’m starting to get used to it here.”