Not invisible: Students create solidarity and community in NAISA 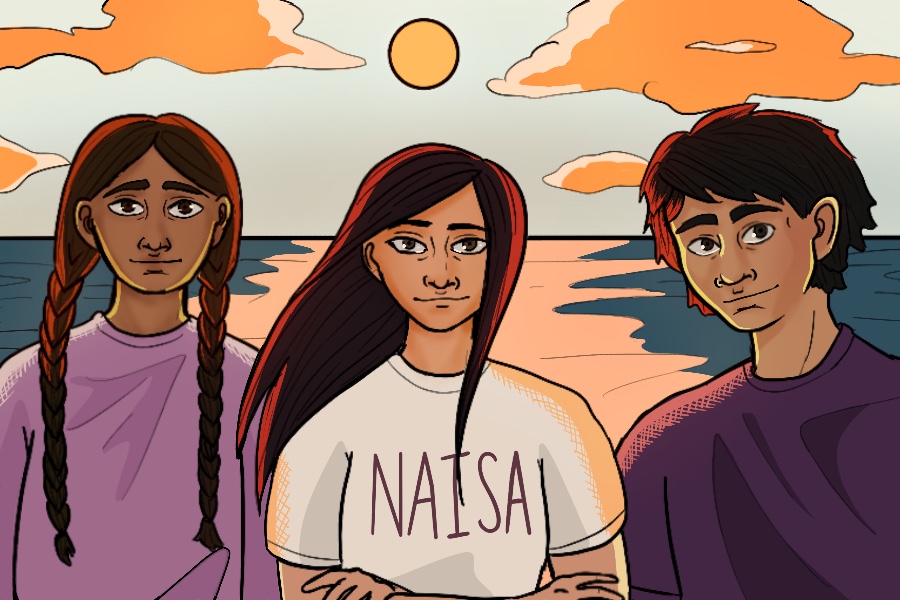 The Native American and Indigenous Student Alliance creates a space for students with shared experiences to connect and find community on Northwestern’s campus.

As the sun rose on Indigenous Peoples’ Day, vivid oranges from the sky reflected off the lake and the faces of the students gathered there. While the students from the Native American and Indigenous Student Alliance also planned to watch the sunset together, a tornado warning and storm forced them inside. Still, laughter and warmth filled the room as they spent the rest of the day painting and doing beadwork.

SESP senior Isabel St. Arnold, who is Keweenaw Bay Ojibwe and co-chair of NAISA’s Council, said she was glad to start and end the day in solidarity with other Native students.

“Grounding yourself in that community is a beautiful thing,” St. Arnold said.

That feeling of community lies at the heart of NAISA’s mission.

NAISA is a student-led organization that fosters connections for Native American and Indigenous students and increases visibility and awareness of their presence on campus.

The group hosts a variety of events for its members and the NU community, including an annual Sand Creek Massacre commemoration, a First Nations Film and Video Festival, weekly gatherings and teachings.

When she first came to NU, St. Arnold said she felt out of place. While she was used to being in schools without many Native students, being at NU proved difficult as she often felt like she didn’t belong.

However, St. Arnold said being a part of NAISA affirmed her presence on campus.

“NAISA … was a home away from home,” St. Arnold said. “It made me feel like I deserve to be here, like I was meant to be here and that I had a reason to be here.”

Although the group was small when St. Arnold first joined, she said it has grown to about 12 to 15 students who consistently attend meetings.

NAISA advisor Aaron Golding, who is a member of the Seneca Nation and works for Multicultural Student Affairs, joined the group around the same time as St. Arnold. Golding said he’s excited about NAISA’s growth over the past four years.

“It’s a testament to the resilience of NAISA to keep it going while the membership got real small,” Golding said.

St. Arnold said in spaces like the group’s craft nights, supply drives and teachings, she has been able to learn skills like beadwork and printmaking. She has also connected with those who have shared experiences and interests.

Being in NAISA, St. Arnold said she can connect to her culture with others there for support.

“It’s just to create a space where you can just simply exist, and to not have to explain your identity or explain your indigeneity to others,” St. Arnold said. “It’s a space to be in community and to not really think about the things you might be thinking about as an Indigenous student at a (predominantly white institution).”

For SESP freshman and NAISA Historian Athena GoingSnake, who is Muscogee Creek and a member of the Cherokee Nation, coming to school at a predominantly white institution was a culture shock. GoingSnake said she didn’t see herself reflected in the people around her or the class curriculum.

Having grown up around mostly Native people, GoingSnake said she missed home. However, she said being a part of NAISA was comforting, especially following the anti-Indigenous vandalism at The Rock last fall.

“I knew I needed this community, but I didn’t know how much I needed it until after what happened at The Rock,” GoingSnake said.

GoingSnake said she felt like she, along with other members of NAISA, never got the chance to take a break. After the incident, the group convened to create a statement and a list of demands.

“There’s just so much pressure to get everything done right then,” GoingSnake said. “We never really get a chance to heal.”

St. Arnold said the group seeks to bring more awareness to the diverse cultures that make up the Native American and Indigenous community, but sometimes there are expectations for the group to host public events or to “do something for everyone else.”

While education and awareness are a part of the group’s mission, St. Arnold said the University can do more to support Black, Indigenous and other students of color on campus.

“The Native people working within the University are definitely advocating for Native students and Native communities,” St. Arnold said. “But, the University just falls back on that and relies on them to do that work when the University itself should be doing that work themselves.”

GoingSnake said she is working to find a balance between feeling obligated to speak about her experience and expressing her love for her culture. She said she hopes to continue working to educate others about her existence as a Native student on campus.

In the future, GoingSnake said she hopes to fill the shoes of St. Arnold and other upperclassmen who have worked to share their experiences and inspire younger students in NAISA.

“I want to take on this responsibility to make our existence known,” GoingSnake said. “Let people know that we are still here.”

Looking back on her time at NU, St. Arnold said NAISA is the reason she grew to appreciate Northwestern.

“Being able to find people who … aren’t necessarily the same tribe as me, but are still Indigenous, and have a similar experience of being hyper-invisible and erased in that way, was really important,” St. Arnold said. “You’re not alone then.”

— The Ripple: “No Wiindigo economy”: Student activism and the fight for fossil fuel divestment