Women’s Basketball: Northwestern loses to No. 5 Indiana as comeback stalls in fourth quarter 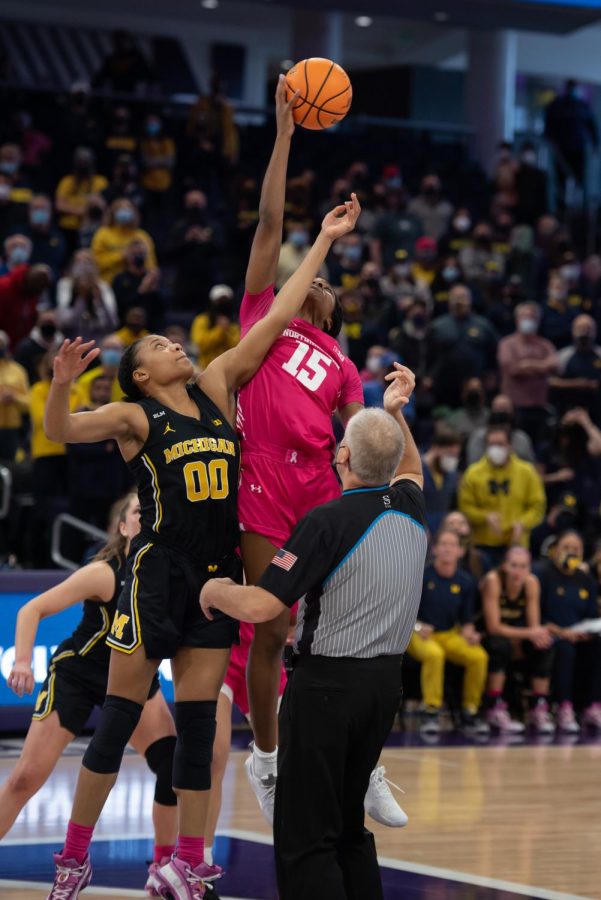 Senior forward Courtney Shaw jumps for the ball at tip-off against Michigan. Shaw held her own in the backcourt against Indiana with 10 rebounds.

Forcing an Indiana turnover, Northwestern senior guard Veronica Burton stole the ball and raced to the offensive end of the court. With a numerical advantage, Burton drove to the bucket and made a layup, tying the score after trailing at halftime.

However, the Hoosiers responded with more firepower, becoming a next-level team in the last quarter.

Despite climbing back into the matchup, the Wildcats (14-10, 6-7 Big Ten) were not able to grab a win on the road, losing to Indiana (19-4, 11-2 Big Ten) 69-58 Thursday. Behind 20 points from Burton, 14 points from graduate guard Lauryn Satterwhite and 14 points from freshman guard Jillian Brown, the squad still showcased a versatile unit on the offensive end of the court.

Starting at a disadvantage, NU spent the first quarter on the defensive end of the court, attempting to slow down the attacking Hoosier offense. Senior forward Courtney Shaw held down the backcourt, grabbing 10 rebounds and limiting Indiana’s second-chance opportunities inside the paint.

“The Big Ten has a ton of big forwards and (Courtney) battles all of them,” McKeown said. “She’s been playing great for us.”

With five minutes remaining in the first quarter, the Cats were taking back control of the game. The squad had opportunities on the offensive end of the floor to tie the game. But a missed three-point shot by Burton allowed the Hoosiers to go back on an offensive run.

NU’s offensive dominance crept back in the second quarter, highlighting the team’s efficiency inside the paint and around the arc. Satterwhite led the team with nine points in the period. McKeown said her leadership on the team has been crucial for the offense, especially with her expertise with three-point shots.

Down by four points at the half, the Cats kicked into high gear at the start of the third quarter. After Indiana scored the opening bucket, NU regained the offensive momentum, leading to Burton hitting that monumental jumper from beyond the arc to tie the game.

With the momentum shifting, it appeared the Cats could come out of this contest on top. But Indiana responded on the floor with the same energy. The Hoosiers eliminated NU’s second chances at the rim and converted on the other end of the floor.

In the fourth quarter, the Cats’ comeback waned, and the team was not able to keep up with Indiana’s momentum. McKeown said the squad’s foul trouble late in the fourth put them in jeopardy. NU spent the rest of regulation trying to compete with Indiana, but the Hoosiers were too far ahead when the game clock buzzer sounded.

“The team has done a great job so far,” McKeown said. “Our mindset is to take one game at a time, but our win over Michigan just gave us some momentum to finish out the season strong.”