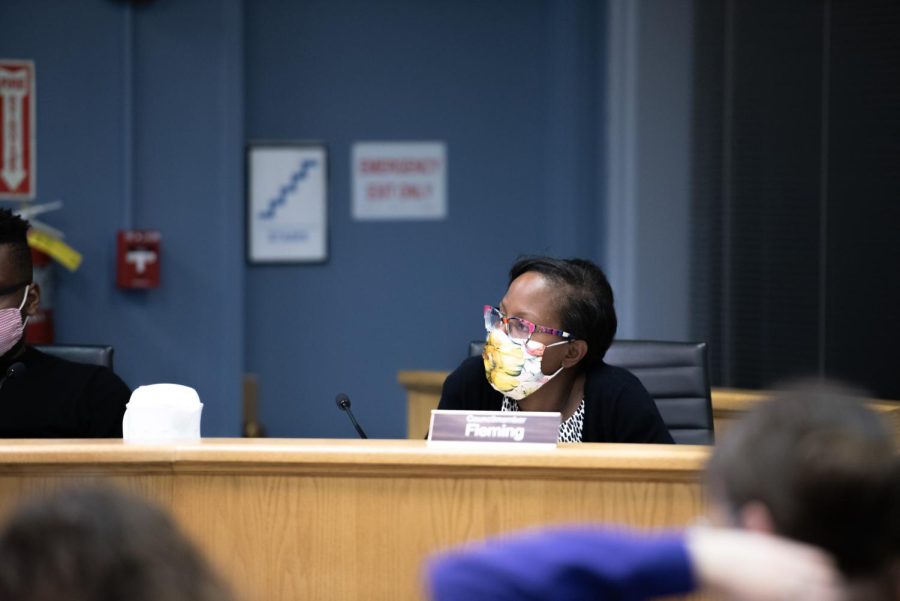 Ald. Cicely Fleming (9th) stepped down from her City Council role after Monday’s meeting. She announced her decision to resign in December, citing the job’s toll on her mental health and the recent passing of her mother.

“I have been reminded that life is short,” Fleming wrote in her resignation letter. “We forget that as we are busy living. My mother was a fighter and unfortunately, she usually only had time to fight for her own life against the many systems designed to keep her oppressed.”

Fleming wrote that her mother would want her to “balance the never-ending fight with the needed rest.”

In 2014, Fleming founded the Organization for Positive Action and Leadership, which aimed to achieve racial equity in Evanston through advocacy and civic engagement. The group elevated equity-focused council and school board campaigns and held education systems accountable for racial achievement gaps before it disbanded in 2021.

During her tenure as an alderperson, which started in 2017, Fleming worked on racial equity and community building initiatives, including improving the city’s police complaint process and reworking the Citizens’ Police Review Commission. Early on, she worked to make it easier for people with criminal records to get hired in the city.

Fleming was the sole councilmember to vote against the city’s Restorative Housing Reparations Program in March. She told The Daily that while some people couldn’t believe she made this decision, for her, the program doesn’t live up to her moral standards, or “North Star.”

“I stand for what I think is free and right and good for Black people, and good for all people,” Fleming said. “That doesn’t always mean that I’m going to support someone just because we have the same African lineage.”

Fleming told The Daily she didn’t accomplish everything she wanted to during her council career.

She wished she could have made more progress to increase citizen participation in local government and involve residents in the city budget process. She said she wants to see more beautification and public art in the 9th Ward.

She also said taking resident calls without staff to help often overwhelms councilmembers. Evanston’s government, she said, should design itself around engaging with community members.

Still, she said she’s proud of the time she spent on the council.

“I definitely went into it wanting to make an impact in the city, understanding that was going to be slow,” Fleming said. “I felt like I did that.”

“She’s never one to just sort of brush things off. If somebody comes to her with a problem, she’s not just gonna say, ‘Well, that’s not my job,’” Jordan said. “She will get you to the right person,  and then she’ll follow up and make sure that everything worked out the right way.”

Larry Suffredin, the Cook County commissioner for the 13th district, first met Fleming at one of her ward meetings. He said he was impressed by her thorough communication, respect and willingness to act.

Ald. Tom Suffredin (6th) said Fleming “was not shy about calling out bulls–t.” He said he and Fleming shared the same “Are you f–king kidding me?” attitude toward facetious councilmembers and city staffers, which he’ll miss once she leaves.

“She was always on top of resident issues and demanding of city staff, who sometimes were dismissive of residents’ concerns,” Tom Suffredin said. “Overall, her legacy will be one of hard work and good government.”

Fleming is now the state director of Birth to Five Illinois, an initiative started by Gov. J.B. Pritzker to improve the state’s early childhood education system.

Fleming said her office is charged with launching new regional infrastructure to ensure parent and provider voices are involved in state decision making.

While this role is new for her, and she doesn’t come from an early childhood education background, Fleming said her ability to think strategically and launch community initiatives will help her in the job.

Larry Suffredin said he believes Birth to Five will be one of the governor’s key accomplishments. He said Fleming’s strengths as a councilmember will carry through to her new role.

He said while Fleming is a gain for the state of Illinois, Evanston feels a loss.

“The ward will remember her as the first person of color elected to the City Council of Evanston who didn’t live in the Second or the Fifth Ward,” Larry Suffredin said. “They will remember her as somebody who worked very hard to understand the issues, to put together as many opportunities for people to be heard, and tried to resolve whatever issues existed in the ward.”