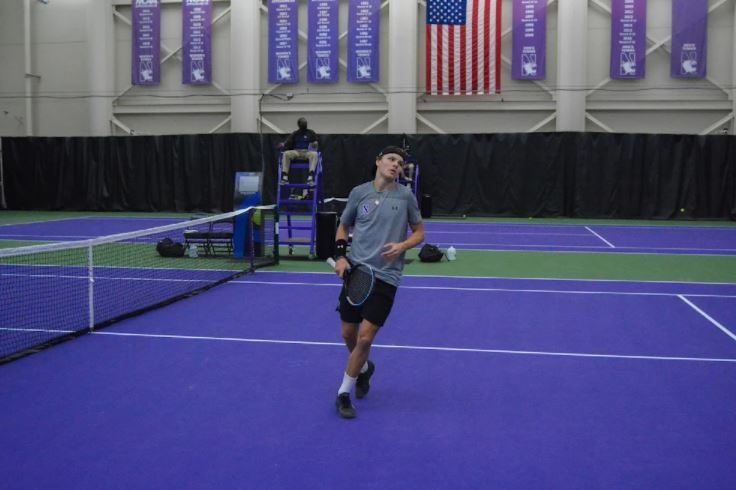 Felix Nordby stops after a point. Nordby and doubles partner Steven Forman won at No. 1 against Notre Dame last week.

Riding a six-match win streak, Northwestern will travel to Vanderbilt University to prove its wins have been no fluke.

Vanderbilt has not played many matches this season, but a win over a solid Virginia Tech team is a mark of quality. Several Commodores also posted impressive results in fall invitationals.

Like the Cats, Vanderbilt has two nationally ranked singles players on its roster, No. 26 George Harwell and No. 94 Joubert Klopper. Both Harwell and Klopper have played atop the singles order, so it is unclear what the matchups will be on the top two courts.

Klopper, who did not participate in the teams’ previous showdown, has yet to drop a single set in 2022. He earned the SEC Player of the Week award for his performance against Virginia Tech and The Citadel on Sunday.

“He’s a high-ranked junior player with a lot of international experience,” Swan said. “We know he’s a good player based on where he was as a recruit and what he’s done so far.”

The rest of the Commodores’ roster is also saturated with veteran players. Max Freeman, Macsen Sisam and Marcus Ferreira have all played at least four seasons for Vanderbilt and were all part of the 7-0 loss.

Swan said all three have been battle-tested by a tough SEC schedule.

“They have different, unique styles,” Swan said. “They’re bringing a lot of experience in the middle of the lineup.”

The Commodores’ doubles also played a key role in their early success. They have an 8-0 set record across their four matches thus far, including a strong showing against Wisconsin, who took the doubles point against NU in their first meeting last year.

With strengths on all three courts, longtime Vanderbilt coach Ian Duvenhage has multiple routes to get his team on the board first.

“We’ll have an idea of how to outplay each of their doubles teams going in,” Swan said. “But we may need to make quick adjustments early in the match if it’s not going the right way.”

Facing the Commodores in Tennessee will come with an unorthodox challenge — the hosts only have five indoor courts instead of the usual six.The sixth singles contest will not be held until one of the first five finishes.

Swan said the unusual format could affect the match’s momentum.

“There’s a chance that it will come down to that match,” Swan said. “Obviously, the goal is to try to be ahead in the match before you get to that point, but we’ve also had some good success at the No. 6 position as well.”