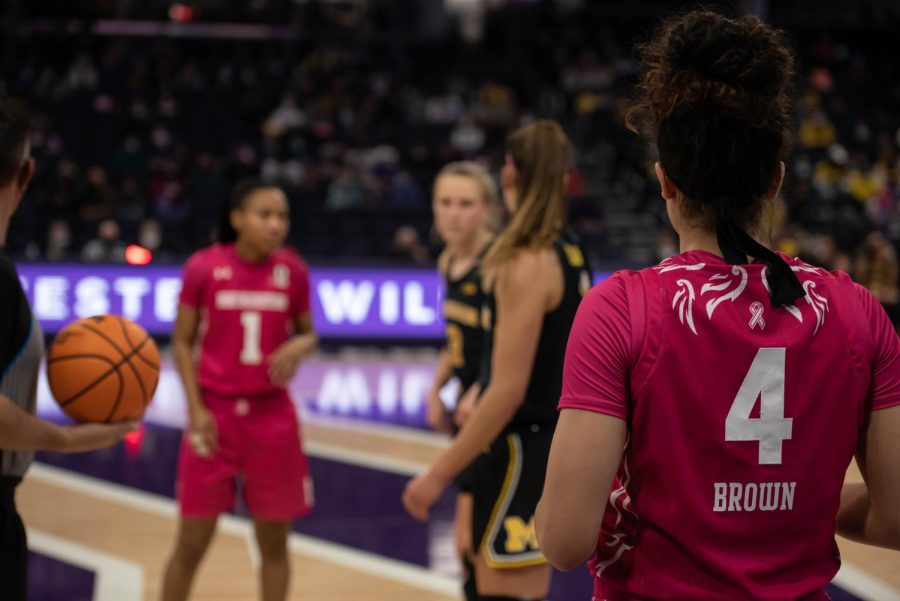 Northwestern’s Jillian Brown prepares to inbound the ball. Brown had the best game of her career in the Wildcats’ upset of No. 4 Michigan on Sunday, recording 18 points and three steals.

The stage was set for an instant classic on Sunday.

Veronica Burton’s penultimate game in Welsh-Ryan Arena. Lindsay Pulliam and other alumni cheering from the sideline. No. 4 Michigan in the building, ready to take on a young, relatively inexperienced Northwestern team.

That was senior guard Burton’s message to her teammates in every huddle, timeout and overtime, coach Joe McKeown said.

They kept their energy high throughout the game, never letting off the gas. After 50 unrelenting minutes of play, the Wildcats (14-9, 6-6 Big Ten) upset the No. 4 Wolverines (20-4, 11-3) in dramatic fashion, winning 71-69 in double overtime. Behind career days from Burton, freshman guard Jillian Brown and senior forward Courtney Shaw, the victory was a landmark win for the NU program.

Brown’s prowess headlined the win for the Cats as she notched career highs of 18 points and three steals. The Michigan native has averaged 7.2 points per game so far this season, but with this breakout performance she solidified herself as an irreplaceable member of the team.

Several of Brown’s looks came from Burton who, while going only 2-from-13 from the field, notched a double-double with 13 points and a career-high 13 assists. Four Cats tallied double-digit points in the signature team win. Aside from Brown and Burton, Shaw scored a career-high 16 — plus nine rebounds — and junior guard Laya Hartman added 10 points of her own.

“I feel like you’ve had pieces clicking at different times,” Brown said. “And today, everybody was just on in different ways. When we play like this, we can beat anybody. We just showed it.”

NU was coming off of a loss less than 48 hours prior, having fallen at Minnesota late Friday afternoon. The Cats’ deep and talented bench ultimately proved to be crucial, with 11 players seeing time on the court.

Burton attributed the team’s stamina to not only their strength and conditioning work but also to each player’s mental toughness.

“It takes a lot of heart to beat a team like that, to go into two overtimes,” Burton said. “Everyone’s exhausted. Everyone’s right there on the brink of giving up. But I think we really dug in. I’ll never forget this one.”

The contest was in Burton’s hands down the stretch. With just under four seconds on the clock and the game knotted 69-69 in the second overtime, Michigan’s Amy Dilk fouled Burton and sent her to the line. But earlier free throw misses and unruly Wolverine fans could not phase her. She sank both and, after a missed Michigan jumper on the other end, cemented the game in NU history.

The historic win was McKeown’s 100th Big Ten triumph. Burton ranked the victory as one of the best of her career. And with just four games left in the season, the Cats look to continue the momentum and set the scene for a successful postseason.

“We’re on an upward trajectory,” Brown said. “We just have to stay focused and keep doing what we’re doing. The hard work that we put in is showing, and when we play together like this, we can really beat anybody.”